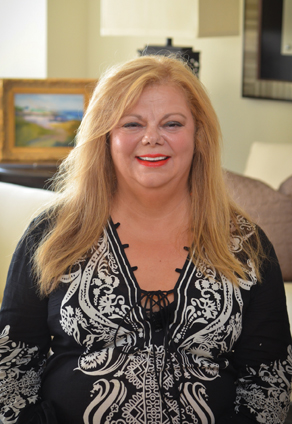 Before we meet, I've been told that Jennie Phillips Culkin's story is essentially a story of a life regained. When we finally sit down to talk, I notice how vivacious she looks in her black summer dress and dramatic turquoise jewelry, her long blonde hair hanging loose around her shoulders. She is focused and intent, yet quick to laugh. As she tells her story, it is evident that she did not just regain her life; she is a woman reborn.

When Jennie speaks of her life now, there's no evidence of her 20-year struggle-a struggle that devastated and nearly killed her. Likewise, she speaks of the years prior to her illness with pleasure. She spent her childhood in Roanoke, Virginia, and attended college at Radford University, majoring in business. After college, she began working in outside sales in the Washington, D.C. area and traveled extensively for her job, something she greatly enjoyed. Later, she married and relocated to the Los Angeles area, and worked in retail.

Then one day, she suddenly felt so sick she couldn't get out of bed. The pain was intense and constant, and she was so exhausted that even small tasks were nearly impossible. "I was a prisoner of war in my own body," Jennie explains. Despite various tests, diagnoses, and treatments, the symptoms persisted, and any sort of normalcy remained far beyond reach.

This continued for a staggering 20-year period, during which Jennie came dangerously close to death as her condition progressed. At one point, she even lost feeling in most of her body and feared the worst. It wasn't until she went to Emory to see an endocrinologist that everything changed. Almost immediately, the doctor told her, "You have a tumor. You need an MRI right now, and you'll need surgery." The MRI confirmed the doctor's suspicion that she had a tumor on her pituitary gland, caused by a disease called acromegaly that she had unknowingly been suffering from for 20 years. Acromegaly, the adult-onset form of giantism, is a disease where the pituitary gland produces too much growth hormone, causing excessive growth and stress on much of the body.

Jennie scheduled the surgery, apprehensive but bolstered by the doctor's stellar medical reputation, and recalled a voice she had heard earlier. "You're going to be okay," the voice told her. She held on to this as she went into surgery. Beforehand, doctors told her it would take three months to determine if the surgery was successful, but she knew it was successful right when she woke up, because her pain was gone.

It took about a year before she fully recovered. But recover she did, living not only to tell the tale but also to tackle a large list of things she hardly had had energy to dream of for years. Living in Atlanta at the time of her recovery, she began working accessory shows at AmericasMart. "I couldn't wait to go to work," she says of her time there.

Always a beach lover, Jennie decided to move to Hilton Head in 2009. While she was lying in bed during her illness, she would watch shows like "Dancing with the Stars" and think that if she ever got well, she wanted to dance. Now, dancing is a regular Friday night event for her at Sonesta. Also taken with "The Amazing Race", she created her own race, beginning in Vienna and traveling alone by train through Prague, Salzburg, and Paris. Now, she travels frequently throughout the Lowcountry and beyond, and has plans for more trips here and abroad, calling Hilton Head "her base for hopping." Additionally, she's modeled for charity events for Patricia's and she exercises regularly, including taking Zumba and Bodypump classes. It's all strikingly apropos for someone once confined to her bed.

She says she sometimes tells her story to strangers, like people she "meets on trains," people she senses might need to hear it. "There's always hope. Miracles really do happen. I'm so well and I'm flourishing," she attests. I don't know exactly what she says to those strangers, but I do know this: they are most fortunate to hear her story, her testimony of rebirth. And what a magnificent rebirth it is.

UP CLOSE
On traveling: Jennie loves taking the backroads when she travels regionally, saying it's "all about the ride." Savannah is one of her favorite cities to visit.
On changing coasts: While in Los Angeles, she decided she wanted to move back to be closer to the East Coast. "That's the wrong ocean. I'm going home," she decided before moving to Atlanta and later to Hilton Head.
Helping others: "A lot of women along the way helped me," Jennie says. Therefore, she tries to seek out others in similar situations and help them with their daily tasks.
Advice to women: "Every woman should get a hormone panel. And if you don't like your doctor, go to another one, and another one if you have to, until you find the right one. Don't give up!"