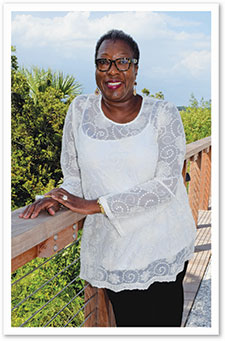 Janice Barnwell is a fifth-generation Hilton Head Islander. Her son, Chauncey, is sixth generation. Her mother was one of 15 children born on Hilton Head.  Her family’s annual reunion—held alternately in Hilton Head and Alexandria, Va.,—includes at least 45 of her first cousins. Some of her cousins’ children have children, making them seventh-generation Islanders.

Janice’s deep roots are as integral to this Lowcountry sea island, as the sand, sea and marsh. She remembers growing up on Squire Pope Road (near Hudson’s current location) and feeling like she lived in a “Garden of Eden” with luscious figs, blackberries and orchard trees all around.  Her grandfather was a prominent farmer who ferried his produce to the mainland. Their food was by definition “farm to table”; the original organic diet, with an abundance of fish, oysters, shrimp, rice and grits.

“Growing up here was bittersweet,” Janice recalled. “We had so much natural beauty and freedom to play outside. Being imaginative was our way of life; we created whatever toys we had—the girls made dolls from grasses we pulled—but there was a sense of something bigger “out there.”

Janice’s grandfather was not only a successful landowner and businessman, he was a huge proponent of education for his 15 children.  All the boys attended the Penn School on St. Helena Island and the girls went to Mather School in Beaufort, which was established in 1867 to educate the daughters of freed slaves. With no bridge connecting Hilton Head to the mainland at the time, they arrived at school by boat or ferry. Janice’s mother became a teacher, first on Hilton Head and later she taught fifth grade at the Michael C. Riley Elementary School in Bluffton.

Janice’s grandfather began a legacy of education and the “mental model,” as Janice defined it, of having a better life for their family’s children and grandchildren. It was passed down.  At 13, Janice went to a boarding school in Burke County, Ga., and graduated at 18. “I didn’t really know what I had till I left Hilton Head,” Janice said.  When she described her life on Hilton Head to her new roommates, nobody believed her idyllic descriptions. She invited several to come and see for themselves. No one questioned her again.

Janice attended Presbyterian College, in Clinton and after graduating, moved to Los Angeles, where she worked as a social worker. While living in LA, she felt the “call of my ancestors” and moved back to the East Coast in 1983.

In the years since her return to the Lowcountry, Janice has expressed her deep commitment to her community through her service as a certified and licensed psychotherapist—with a mini alphabet following her name: Janice Barnwell, MA, LPC, LPCS, CLC. She insists it’s not the credentials, but her 37 years of experience that have established her as a revered mental health care provider in Beaufort County. She is the founder and chairperson of Healing Haven Institute, Inc., whose mission is to address the serious issue of domestic abuse in South Carolina, which is fourth in the nation for numbers of domestic violence murders. Her work has received the recognition of Gov. Nikki Haley, who is committed to reducing recidivism among convicted abusers.

Since September 2013, Janice has been under contract with the Marine Corps Recruit Depot at Parris Island, Beaufort, to serve as a military family life counselor. She works primarily with drill instructors and their families to manage potential anger, stress and marital conflict that can come from a highly stressful job.

The ancestors who called her home, apparently requested she also be a steward of her long heritage. She serves on the board of the Gullah Museum of Hilton Head, whose mission is to revive, restore and preserve the Hilton Head Gullah history. Currently, funds are being raised for the restoration and preservation of several structures on Gumtree Road. When completed, they will serve as a museum to depict Gullah life before the bridge from Hilton Head to the mainland was built in 1956.

Janice walks and talks with the earth mother grace and sonorous rhythm of a woman born on a tropical island. She is secure in her roots, at home in her birthplace and grounded in her love of family, community and heritage. That’s quite a legacy.

Fashion: Janice has the best sense of color and the panache to carry it off. Plus, her earrings aren’t accessories; they’re bold exclamations!

Family: Her son, Chauncey, recently graduated from law school and passed the bar, carrying on the family tradition of education and excellence.