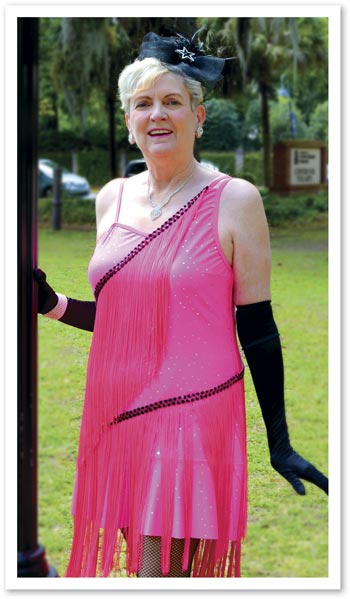 Janet has spent the majority of her life chasing her girlhood dream of being an “Ette.”  “I love life. I love to entertain. I like including others.”

It all started when she wanted to be a majorette in high school, but due to the band director’s insistence, she ended up in the marching band playing the clarinet, all while her sister twirled on the field. This did not deter Janet from chasing her dream.

In college, she formed the Sesqui-kettes, a chorus that performed to publicize the University of Michigan’s 150th birthday. She was also a member of the Ann Arbor Hockettes, a precision skating group that entertained between periods at the Michigan hockey games. Their performances took them to Madison Square Garden, and they were showcased in the opening credits of the television show, “Wide World of Sports.” Next came The Pulsettes. Janet organized this group with friends from an aerobics class.

When she finally was old enough to try out for the world’s most famous Ettes—Radio City Music Hall Rockettes—she was too tall and too busy studying at college, but she wasn’t done dancing.

Years later she took tap lessons from her little girl’s dance teacher, which lead to rolls in the local civic theatre productions of “Anything Goes” and “42nd Street.”

In 2001, during a trip to visit her daughter, who was living in New York City, Janet talked her way into the Broadway Dance Center’s Rockette Experience. This opportunity is usually offered to 10-18 year olds, but that didn’t stop Janet, who obviously exceeded the age limit by more than a few years. She may not have been an actual Rockette, but she was able to get the feel of the experience. She loved it!

Janet and her husband relocated from Michigan to Dataw Island, and her quest to be an “Ette” followed. In 2006, Janet formed the “Beaufortettes Tap Dancing Divas” group, which has performed in numerous productions and shows. Aleisia Ashlaw, owner of the Beaufort Academy of Dance, choreographs their routines. The Beaufortettes also have ties to USC Beaufort through the Beaufort Theatre Company. Some of the productions they have performed in are “Forbidden Broadway’s Greatest Hits” and the upcoming “Nunsense: The Mega Musical.”

The Beaufortettes have tapped their way through “Red, Hot and Cole,” a performance in a professional performance of “TAP CITY,” and for three years they danced in Beaufort Memorial Hospital’s “Day of Dance.” They also performed a military tribute to the five branches of the armed services, dancing to the “Hawaiian War Chant” in a Pearl Harbor Day salute. “We also got to strut our tail feathers before and after a performance of “The Hen Party” at the Newberry Opera House,” Janet recalled with a smile.

In 2011, The Beaufortettes competed and placed second in the “I Love Dance Competition” in Greenville, SC. The following year, they competed at the DTI Challenge of Excellence in Savannah, where they were awarded the Judges’ Choice Elite Award with the high score of the day. They also were awarded “The Not So Desperate Housewives Award” and received a standing ovation. Next came a First Place High Gold award at the Encore Competition in Greenville, SC.  At the Encore Grand National Finals in Savannah, they won senior small group award, earning the title of National Champions, a feat the group never expected to achieve at their ages­—and in 2015 they became the National Dance Champions of the Carolinas.

All due to Janet’s desire to be an “Ette.”

In 2013, Janet heard about a “high kick contest,” sponsored by a local television station, and had her husband photograph her doing her best “Rockette” version. She thought this would lead to a chance to achieve her ultimate “Ette” dream. She won the high kick contest; but alas, the prize was not an invitation to join the world famous kick line. She did, however, get to take part in the Nativity Scene at the end of the traveling version of the Radio City Music Hall Christmas Spectacular when it traveled though Charleston.

Janet got a little closer to the prize when she and two other members of The Beaufortettes made a trip to the Big Apple. They showed up at Today Show Plaza in their dance costumes. They were hoping to be chosen to participate in the show’s weekly makeovers, but that didn’t happen. But Janet did get to talk with one of the show’s producers.

Fast forward to 2016. Janet was back in New York visiting her daughter and granddaughter, and let her producer friend from The Today Show know she was coming by as part of an early 70th birthday celebration. Once again, she wore a dance outfit. What happened next was a complete birthday surprise to Janet: Two Radio City Music Hall Rockettes showed up at the Today Show’s outside location in Rockefeller Center! They invited Janet and her granddaughter to join them in a kick line at Radio City Music Hall. While she didn’t dance on the actual stage, Janet went to a rehearsal hall and did learn a dance routine with the Rockettes! They also gave her a pair of official Rockette earrings. Her ultimate “Ette” dream had finally been realized, and it was all filmed and shared on The Today Show!

These days, The Beaufortettes are dancing their way into the digital age. “Our videos can now be found on YouTube,” Janet said proudly. “Although, I have to say, our grandchildren are not quite sure about watching Grandma in tights!” she laughed. “But we believe you are never too old to achieve your dreams.”