A Story About Best Friends 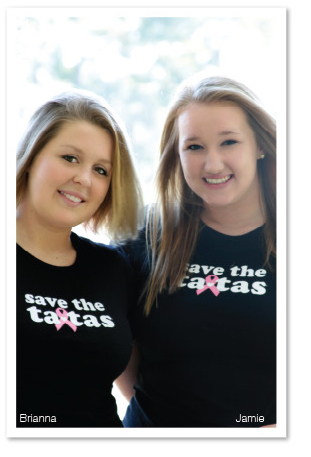 This is a story about best friends. It's not an overly inspiring story about the secret of life, the tragedy of death, the mystery of miracles, a love lost or success found. It is simply a story about two girls who have found a true friend in a world where, sometimes, that is all you need.

"Well, the first thing you should know about us is that everyone thinks we are each other," explained Brianna Norwood, as I sat across the table from these two enthusiastic best friends. In the same breath, Jamie Bradford followed with, "Yes, everyone thinks we are sisters!" As we continue to talk, I quickly see how someone would mistake them. Not only is there an uncanny physical resemblance, but the girls are also literally together all the time. They are both seniors at Hilton Head High, both captains on the Palmetto Rowing Club Crew Team, both work the same schedule at Watusi, and if that isn't enough, they spend all their free time with one another as well. "The other day Jamie's dad said, 'I don't ask where you're going anymore, I ask what are you and Bri doing tonight?,'" laughed Bri.

With all of this togetherness, it is hard to believe that the girls don't run into some conflict, but they assured me, "We never fight.but we always argue! Our form of compromise is whoever gives up first obviously didn't care enough," they both giggled. "Like she likes nature shows and documentaries, and I can't stand them, but I'll watch them with her," said Jamie. "And she likes little kids, so I'll go with her when she babysits a lot of the time," chimed in Bri.

So what's their secret to compatibility? They are complete opposites! "We never get sick of each other because our differences complement each other. I'm not very organized, so she'll text me to remind me to do things like paint my nails," Jamie said. Bri added, "We also never fight because we know how each other are and what we need. She won't cry, so I know when she's upset about something, I need to get her out of the house." Jamie responded, "She will get all worked up about something silly and I'll calm her down. I'm not afraid to tell her, 'stop crying, you're crying over something dumb.'"

After a mere hour spent with these girls I got a glimpse into a friendship that was so pure, so genuine, and so real that it was hard to believe they had found such a friend at such a young age. For a while during our conversation I stopped writing their words and simply observed the way they interacted with each other. They finished each other's sentences, giggled as if everything was an inside joke, and knew each other so well that they spoke about each other's traits, mannerisms, weaknesses, flaws and choices as if they were their own.

At the end of the school year the girls are graduating and each applying to schools away from home, on separate sides of the country. When I asked if they ever feared they would lose touch during college, I was met with an overwhelming "NO!" from both sides. "I'm not worried at all about losing touch in college," Bri said. "It's never even crossed my mind!" chimed in Jamie.

As I drove back home that afternoon, I couldn't help but think about my best friend, hundreds of miles away, and how I missed having that girlfriend who knows my flaws, knows my weaknesses, laughs with me when I needed to laugh, and calls me crazy for crying over something I shouldn't be crying over. Perhaps Jamie and Bri's story is not one of tragedy, miracles, or the meaning of life, but I was wrong to say it is not overly inspiring. This holiday season, I hope their story has inspired you to think about the true friends in your lives. Have you lost touch with them? Have you treated one poorly? Or perhaps you've just been taking for granted what he or she truly means to you. Now is the time to pick up the phone, mend those relationships, and realize the value of having a true friend in your life. Not everyone is able to find that friend who can love, cherish and value you for who you are, and if you are able to find that person, my advice to you is to hold on, because this is truly a forever friend.

Up close:
Friends since: 5th grade
Favorite movie: The Notebook
Favorite music: Country. "We can relate every song to our lives," Jamie joked.
What they want to be when they "grow up": Bri: Wants to get her doctorate in zoology and work at a zoo with endangered species. Jamie: Wants to get her degree in Early Childhood Education
Hobbies: Bri: Painting and animals Jamie: Babysitting and army things
Fun Fact: Bri and Jamie are proud to be captains on one of only two Crew teams in the state of South Carolina. They get to travel all over the south for races.