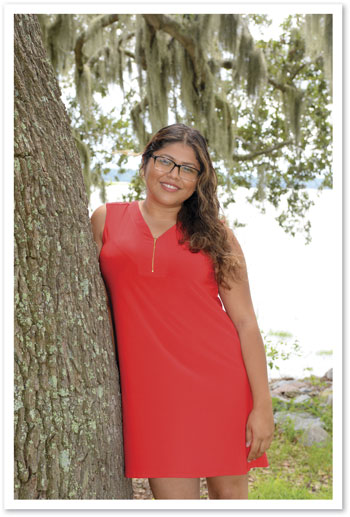 Growing up should be the easiest time of your life. It’s a time when your imagination is allowed to run wild. It seems that the world’s problems bounce right off your sense of youth and innocence. For Imelda Golden, her adolescent elasticity could not protect her from the harmful and dangerous vices that grip some parts of the world.

Imelda was born in Yuma, Arizona, right outside Phoenix. “Living in the projects comes with baggage: Drug deals; thugs lurking; people getting mugged and daily shootings, but that was just a run-of-the-mill day for me,” Mel explained. In addition to the daily storm of danger, a period of homelessness and living in the family car was added to her family of five before they moved to South Carolina in 2006. How did they get through all of these hardships? Mel looked to her mom to be her rock. Mel’s mother made sure Mel and her siblings didn’t know they were living in poverty, or a bad situation. “I thought all kids lived this way,” Mel said.

With Imelda being the first born when her mom was age 15, she was an automatic helper when her two brothers came along, both having special needs. Not only did her mother make her feel safe, but also impressed morals and the importance of education upon Mel, making sure the situation they lived in didn't over take Mel’s hopes and dreams of being successful in this world.

“My mom told me I was born with a golden star over my head, making sure I knew I was special and could do anything in this world,” Mel explained. She realized she needed to take the pain and suffering of her childhood and turn it into a life worth the suffering. Through hard work, the support of her mom, 13 different schools and the power of God, Mel is the first generation in her family to graduate high school. Not only did she graduate first in her family, but also graduated fourth in her class, with participation in college duel enrollment, the National Honor Society and many more organizations. Mel kept the momentum rolling and graduated from the Technical College of the Lowcountry with an associate degree in art, while earning two certifications along with it. Graduating from TCL made her the first generation in her family to graduate from college, too.

Just finishing an internship at the local television station on Hilton Head (WHHI) and continuing her education at USC-Beaufort for a bachelor’s degree in communications (hoping to focus on television production), Mel is paving her path toward success. “My dream? My dream is to become the “Mexican Oprah.” I want to have her insight on life and give back to the world like she does,” Mel laughed.
Mel is a positive, bubbly, radiant, intelligent and hilarious person. Our planned 45-minute interview went on for 3 hours because we meshed so well. At the end of our conversation, I had no doubt Mel will achieve all of her dreams and leave a legacy for generations to come.

She is driven and dedicated both in excelling in her education and in life itself. Mel doesn’t allow obstacles to hold her back. She is constantly bettering herself knowing that her success is at stake. Her hard work has given her opportunities she thought she would never have. In fact, last May she was chosen to be a speaker at the Hilton Head TedEX event, where she talked about the three things that got her though her hard times: Faith; education and tribe. She attributes these three things make her who she wants to be.

“I didn’t speak at the TedEx talk to be famous or anything, I did it because I want that little girl or little boy out there who is going through the same things I did to see that it gets better. People can be in charge of their own reality, and I am living proof that life gets better.”

UP CLOSE:
Coffee Queen: “I’m obsessed with coffee! I could drink it morning, day or night! A cup of coffee and a good book, and I’m happy.”

Animal lover: As we were sitting at Starbucks, Mel couldn’t help herself to love on every dog that walked by. “I’m one of those people who will lie on the floor and pet your dog before I do anything else!”