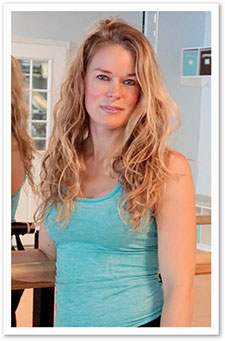 Holly Wright has landed in the life that suits her. She is a personal trainer and the owner of Trinity Fitness in Bluffton. Her path here was neither direct nor obvious, but as she recalled different events in her life, what emerged suggested she’s been led in this direction throughout her life.

Holly grew up in a small farming town in New Jersey. She was a natural athlete and started playing soccer as a 5-year-old. She is the youngest of three sisters. She started kindergarten at the local school, with only 14 people in her class, and was there until she transferred to a larger Catholic high school. It was more than an hour drive each way, but her parents wanted her to have the opportunity. Her mother was a teacher; her father was an insurance agent and proficient with computers. He taught Holly and by fourth grade, Holly was a computer geek, teaching her mother.

Holly’s story portrayed a close family and a nurturing (if somewhat sheltered) environment. It was a surprise when she described her battles with anorexia and bulimia in high school. On a high school retreat, she finally acknowledged the issue and discovered there were other girls with the same problem. They offered support and accountability to each other. “You might not be strong for yourself, but you want to be there for other people who are struggling,” she said. Holly’s point in bringing up her eating disorder was that it made her aware of and sensitive to the seriousness of people’s battles with body image and food. “I realized nothing can get you out of it but yourself.  For me it was a matter of finding my own worth to God,” Holly said.

After college, Holly used her computer skills and worked in IT for six years. There was a feeling that her career wasn’t lined up with what she really wanted to do. During that period two incidents began to shift her direction. The first occurred over a period of time when lots of people she knew were in the hospital for various reasons. She witnessed so much discomfort and wanted to help.  She had studied reiki—a healing technique based on the principle that a practioner can channel energy into the patient through touch and activate the natural healing process. Her healing touch helped all the people she visited.

The second one was more personal. After her gynecologist conducted a number of pap smears, she was told she might have cervical cancer. They scheduled a biopsy to confirm. “I immediately went home and started to practice reiki on myself 24 hours a day, seven days a week, until the procedure,” she said. Amazingly, the biopsy showed that everything was clear.

She couldn’t ignore how health and healing were showing up in her life. It began to feel like a calling. She wanted to help people relate to “food as fuel” and understand that their “bodies are temples.”  She wanted to use her energy work to relieve distress and help “people resolve problems and re-balance themselves.”

While these ideas were taking shape, Holly met her husband, Gavin.   She met him by chance on the Appalachian Trail. They are both athletic, but when she helped him train for a half-marathon, she described herself as a “tough taskmaster, pushing him out of his comfort zone.”  His response: “Holly would make a great personal trainer, just not mine.” She credits him for her finally deciding to do it professionally.

Holly and Gavin married in 2010 and decided to move to the Lowcountry after he drove down the East Coast and discovered Bluffton. Her calling has now been brought to fruition as the owner of Trinity Fitness. She has her certifications in Pilates and yoga. She is a certified personal trainer. She is now a Reiki Master. Her holistic approach focuses on “empowering my clients so they don’t have to need me.” Holly says health is about proper nutrition, fitness and balance in all aspects of life. Wholeness and health really do require equilibrium in our minds, bodies and spirits.  “You can’t focus on one thing. There is no quick fix.”  Life experience has given Holly her resiliency, strength and compassion.  She’s found her place.

Best loved: Gia is their Border collie mix and the object of Holly’s nurturing energy.

A league of her own: Holly still plays soccer in the Hilton Head Rec Soccer League. She is one of two women on the coed team.

Learned to listen: One morning at 5:00 a.m. while driving to work, a “poignant communication” told her to move to the right lane. She didn’t see any other traffic, but the intuition was so strong she did it. Seconds later an out-of-control car slammed into the left lane. She now trusts that voice.