For the Stars and Stripes 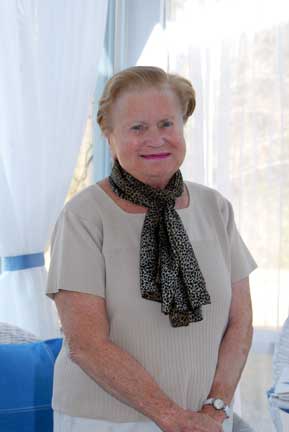 As the train chugged from the Prague station, Hana Klimesova tearfully waved good-bye to her father and brother, wondering if she would ever see them again. "My mother died with ovarian cancer at 48. Leaving my father behind was so painful. As much as I loved my family, the overwhelming fear for my life and desire for freedom prevented me from rushing off the train into my father's protective arms. He insisted I leave quickly for England before things worsened. He told me dictators would always want to control our country, and he wanted me to be free."

As the train picked up speed, the 17 year-old sat quietly, trying to grasp her future alone in a strange country. "Why must I leave my home? We had a lovely home and garden in Prague. Our family belonged to a gymnastics club. We learned a healthy body means a healthy nation. We lived freely and happily among our friends. When I was nine years old, the nightmare started," Hana remembered.

In 1938, following the Anschluss in Nazi Germany and Austria, Adolf Hitler's ambition was annexation of Czechoslovakia. Hana reflected solemnly, "The Germans took over our country, step by step. That's how they do it, you know. First it was the military, and then quickly our communication system was seized. Most of us had radios, so we gathered to listen for news about the war, but the Nazis removed the part allowing reception outside the country. My father and others were smart enough to recreate that little part...we called it 'Churchill'," she smiled. "In the dark we hovered around the radio hoping for good news. My mother always said not to worry because Churchill and the U.S. would save us."

Conditions worsened in Prague. "The Nazis took over our education system, forcing children to learn the German language. Some of our University students, objecting to German occupation, walked around with Prague flags and our colors. That night, the Nazis surrounded the college (they always acted at night), separated the boys and executed them," Hana bowed her head, "and raped the girls continuously so none wanted to live.
Thank God, my Father learned to speak German fluently, as it saved his life. As part of the underground, he helped transport ammunition. One night he did not come home. Disobeying Nazi orders forbidding us to leave our homes, I crept to the airport road blocked by a fence just as a group of armed Germans drove by, their guns aimed at me. I put my head down and waited for the shots. They drove by me. My father finally returned shivering all over with news that the Nazis had caught each of his friends with weapons and killed them. His delivery had already been made when he was stopped. In fluent German he convinced them he was out for another reason! Another night the Communists and Nazis were shooting it out across our yard. We dove between shots for the basement where our coal was kept. I buried myself in the coal vowing if I lived, I would escape!"

Hana's father wrote his friend who worked with the BBC in London telling him he was sending Hana to safety in England. "I actually felt it would be an adventure," recalled Hana. "It was such a relief to be away from the Nazis." With only two choices in England for work, young Hana chose nursing over domestic, and struggled relentlessly learning the English language. She attended Oxford with a strong interest in anesthesiology, but only doctors were permitted to anesthetize patients. Since her father had written not to return, in the early 1950's Hana sailed to the U.S. "When I saw the Statue of Liberty and the U.S. coast, I said to myself...now I am truly free. You cannot realize the fear. Your freedom is taken away and your life means nothing. They killed for no reason. They threw people out of windows, drowned them..."

Hana became a legal US citizen in 1954 and married Larry Hudachek, who had escaped under fire to Austria. Hana obtained a nursing degree from the University of Maryland, and eventually realized her dream of becoming an anesthesiologist, working 25 years in a Staten Island Hospital. The couple retired to Florida, but Larry died with heart disease and Katrina wiped out their home. Hana moved to the Lowcountry where she became a Tea Party Member and marched last September in Washington.

"I am frightened for the U.S., and its direction. President Regan was the most important man to me because of his accomplishments for freedom. Now this government is trying to take our freedom"...she lowered her head, getting choked-up, "I am so grateful to those who fought in Normandy...they saved my life, and I want to stay free!"

Passionate about: Playing classical music on piano
Fascinated by: Astrology. I belong to a club, which meets monthly.
Finds great joy in: Traveling freely through Europe without fear.
Anchor of her soul: Freedom!
Her cost for freedom: Never seeing her family again.