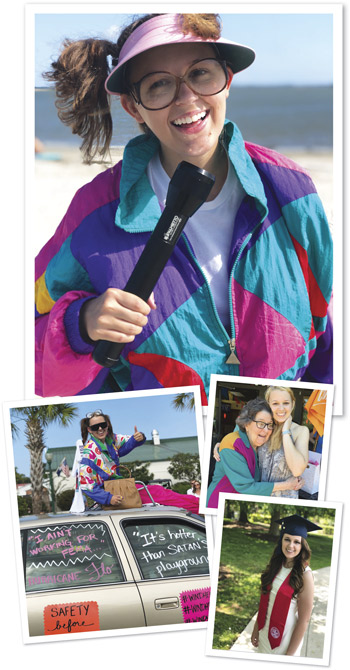 Haley Langford is a lovely breath of fresh air; a spirited blend of tender-hearted philanthropy and sweet sense of humor. This proud Ridgeland, SC girl became a viral sensation, capturing more than 50,000 social media hits, when she created weathergirl Hale McClaine during Hurricane Florence. She raised more than $5,000 for North Carolina hurricane victims with her self-proclaimed ‘wacky-tacky’ and likable persona. She humbly recounts the events that followed, but Ms. Langford’s heart for service is clearly evident throughout the life she leads every day.

Haley is her 90-year-old grandmother Ellen Langford’s full-time caregiver. Not a burden, but a blessing; Haley didn’t want to see her grandmother in a nursing home. “I’m not giving up on her,” she says. This decision came after earning a Bachelor of Arts degree in International Relations, with a minor in Theology, from Liberty University, a private Christian research university in Lynchburg, Virginia. “I loved it,” Haley says of the experience. She hopes to begin studies for a Master’s Degree in Divinity this coming spring, depending on the elder Langford’s health.

Haley fashioned her weather/media persona in a sweet nod to her grandmother, complete with color-blocked windbreaker, lipstick, oversized glasses, pearls, and pigtails. A flashlight became her microphone to finish the look. Creating Hale McClaine was a way to bring a bit of levity to the negativity and sensationalism by the weather forecasters during the impending storm. “The media was just intensifying emotions and marketing with fear.” Even her friends were torn between evacuation or hunkering down. “It is up to the individual’s discretion, so don’t judge the choice,” she remarks. When The Weather Channel began playing ominous music while flashing maps across the screen, Hale was born, and so were the seven self-shot videos that followed. Her noticeably calm and light-hearted shtick was in no way to minimize the hurricane itself; only the ways in which forecasters were reporting it.

Friends and fans created not only a collective buzz, but took action as well: viewers suggested a fundraiser! Allprint Custom Tee’s and Hydrographics in Ridgeland stepped up and made T-shirts with Hale and #windheffer2018 on the front. The reverse side of the shirt listed 22 sponsors, all of which either contacted Haley or the T-shirt company directly to be listed. Combined, these methods raised $5,300 in total. “My goal was $5,000, and I was going for it.” At one point it looked as if they might not reach that goal, but Braden Seafood and Oyster Farm in Beaufort and Port Royal stepped up and closed the gap.

The Lowcountry was spared during Florence’s fury. Unfortunately our neighbors in several areas of North Carolina were not. Haley, along with close friend Robin Holmes, traveled to serve, bless, and ultimately distribute the donation money. Through a pastor friend at Renovation Vineyard Church in Longs, SC, Haley and Robin joined in a partnership with Disaster Relief 180 to facilitate their dual effort to serve the surrounding area.

“It was an act of God,” Haley recounts. “Trucks came with food supplies and toiletries.” She likened it to a mobile Costco. The church warehoused items and provided storage space. They constructed and packed boxes with non-perishable items, and strapped and stored them for later distribution. They also delivered goods in person, riding through areas of severe damage. “One of the worst scenes was a woman crying in her destroyed front yard. She had been told by someone that to clean up her property, it would cost $5,000. The church was able to do it for free the next day and in only two hours!” The woman gratefully accepted some of Haley’s donation money.

Scam artists sadly prey upon the vulnerable in times of disaster. Volunteers were careful to ask detailed questions to determine those in true need, and if insurance was an option for them. “In some cases, we had some trouble finding people to give money to,” Haley remembers. “We arrived nearly one month from the time the hurricane hit, and some residents had simply left town.”

Haley Langford has some sage advice for her generation. “People my age sometimes live in blissful ignorance, believing it won’t happen here.” She suggests reading the fine print on flood insurance and other coverage, as she’s witnessed the aftermath of destruction first hand.

Church ministry is where Haley says she has been called to serve. “The Lord placed me here, where he wanted me to be.” Those fortunate enough to be in her life would agree.

A Very Real Dream: To serve in The United States Marine Corps!

Graduation Gift to Self: A Harley Davidson