When The Soul Exhales 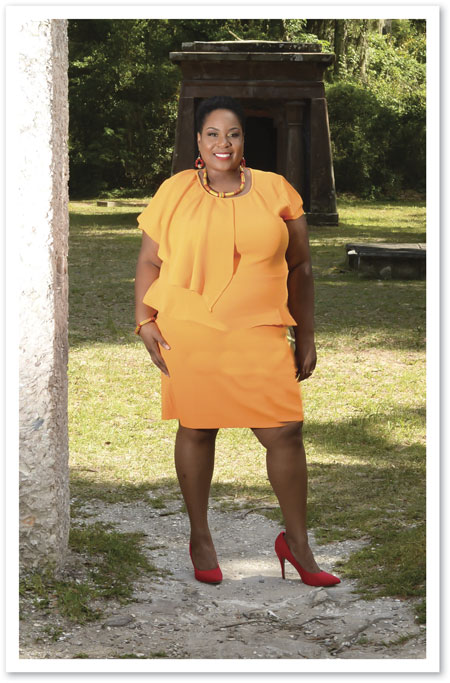 Her vibe is pure; her voice, powerful and effortless. Surely the Queen of Soul herself, Aretha Franklin, smiles down when she hears this R & B songbird belt out one of her classics.

St. Helena Island’s own, Gwen Yvette, is an independent singer, songwriter, entertainer and educator, living out her dream with her soul’s full consent.

Gwen has raised the curtain for mega-stars Patti LaBelle, Jeffrey Osbourne and Kem this spring. She’ll open for the O’Jays next month and is jazzed to be a guest performer on the UK tour, Soul Jones Collective, this coming October!

Born in Harlem, her parents moved south when Gwen was five. Her beautiful mother, Geneva, reminds her that as young as 3 years old, she was singing in the church choir.  “Between 10 and 12, I realized my singing moved people just from watching their expressions,” she says. The sounds of Aretha, Sarah Vaughan, Smokey Robinson and Gwen McRae played in her home growing up. Concert and gospel choir kept her busy during her school years, as did singing in various talent competitions.

Post-graduation plans seemed inevitable. She set her sights on the Big Apple, and for more than a year, Gwen performed, made contacts and auditioned. But harsh words hit the ingenue hard. She was told to “change her look to make it big,” which Gwen knew was code for lose weight. “It was crushing,” she recalls, “my confidence was definitely an issue.” Back home to South Carolina she went. She got married and spent the next 10 years working in a variety of unfulfilling jobs. Singing was reserved only for weekend wedding gigs. It was during this time when, at age 28, endometrial cancer took away Gwen’s possibility of having children naturally. “It was a very dark time,” she recalls. “I was clinically depressed, turning 30 and feeling unaccomplished.”

She tells of an internal power, where prayer and meditation saved her. “Ultimately, I am a spiritual being, in touch with my spirituality,” she says. This positive energy and her family’s support fueled a new desire in Gwen. Her father, Algerene, was an incredible supporter. “You can be whatever you want to be,” he would say. His and her mother’s love and confidence were a constant, and she experienced a gradual coming-back-to-life. Higher education became her focus, and she earned a myriad of degrees: Associate of Arts from Technical College of the Lowcountry; Bachelor of Science in Psychology from College of Charleston; Master of Science in Human Services from Capella University; and Master of Science in School Counseling from Cambridge College. She worked and enjoyed her time as a substitute teacher, group counseling facilitator and behavioral management specialist. Gwen was three courses and one dissertation away from her Ph.D. when her fathers’ passing in 2011 made her re-evaluate her life-path. “He was my rock. When he passed, it was the hardest thing I’d ever gone through,” she says.

Music saved her this time, and she credits the late Whitney Houston and her hauntingly beautiful voice. “I found I remembered all the words to her songs,” she says. “Her death impacted me deeply, and really was a catalyst for me to be a (vocal) artist.” Gwen believes music always plays a part in healing during trying times because it helps her transcend. And music was definitely plucking her heartstrings.

“I went to an audition!” she smiles. By herself, Gwen waited in line for seven hours to audition for Sunday’s Best in Atlanta. “It was a 15-second audition, but a great experience,” she remembers. The Voice was next. She got to sing “One Moment in Time” in its entirety, waiting only two hours.  In Charleston, Gwen performed on the X-Factor for Simon Cowell, Demi Lovato and Kelly Rowland.

“Kelly threw her shoe at me!” she laughs. Apparently, this is a good thing, as Kelly wanted to know where she had been hiding her talent all this time! Gwen sang Etta James’ “I’d Rather Go Blind,” and blew them away.  Next stop, they sent her to Hollywood! Though she didn’t make it through the final round, her mindset was rock solid. Gwen was coming back home to put together a band; Gwen Yvette & TC Soul was born. A group of talented artists in their own right, they are four musicians and two background vocalists.

Her personal, debut album of original songs, “Love, Dreams and Visions” is available on iTunes, Spotify and Amazon now. The record is perfectly named because this songstress has worldwide vision. “I see myself singing for an audience that doesn’t look exactly like me,” she says. “That’s a sign I’m performing in other countries.” She talks of someday establishing a school of the arts, where singing, dancing and acting would be developed from a young age. Ms. Yvette herself performed in several plays under a talented playwright, Lynda Morris, and was an extra on HBO’s “Righteous Gemstones.”

“When you want something, you have to go out of your comfort zone,” she says. “It’s always a leap of faith.” She continues, “It won’t be easy, but never let people tell you that you can’t pursue your dreams.”

Check out her track: “Bigga”—gorgeous vocals and mesmerizing beat

Would love to: learn to play the piano and bass

Radio Host: She learned how to run the station!

Everything Gwen: www.gwenyvette.net. See the sponsor page to assist with donations for the UK tour! Follow her on Twitter: @realGwenYvette.