Celebrating those who give of themselves. 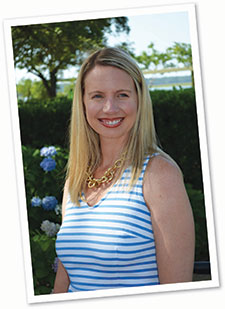 Elizabeth Klosterman, a native of Charleston, moved to Beaufort seven years ago, returning to the place where some or her relatives were originally planters before relocating to Charleston.

PINK: Tell us about your early “roots” in the Beaufort County area.

Elizabeth: Well, many of my relatives are actually buried at Old Sheldon Church. In my fanciful ancestor-worshiping way, I like to think of my move to Beaufort as sort of a coming home. I met my husband, Andy, in Beaufort and we have a 10-month-old boy, Henry. This is such a lovely and special place and I have found great personal happiness here. I think that is part of why my work with Junior Service League has become so important to me. I want to give back to this community that has been so incredibly good to me and my young family.

PINK: Junior Service League is obviously very important to you.

Elizabeth: I could talk about the League all day and my friends will confirm that! It is my favorite topic outside of motherhood. We are an organization of women devoted to serving the women and children of Beaufort County. We have granted tens of thousands of dollars over time to various charities that reflect our mission. Most importantly, however, we serve the community through working countless volunteer hours at organizations such as Child Abuse Prevention Association (CAPA) and CODA  (Citizens Opposed to Domestic Abuse).

PINK: So you are not just a fundraising group?

Elizabeth: No. The physical work our members do cannot be overemphasized. We are very good at raising money, but we are also about volunteerism. We physically show up and work for a cause. We are first and foremost a service organization.

PINK: I understand that you have just been elected president of the group.

Elizabeth: I was thrilled to be elected as the 11th president of the Junior Service League. I have some very big shoes to fill. The girls who have come before me include many prominent, young Beaufortonians, such as Gloria Duryea, who was just named the Civitas Young Professional of the Year. Also, there is Katie Phifer, a successful financial advisor who has served on countless boards in the community and given selflessly of her time and talent. Women of their caliber have made our League what it is today. The incoming board is just now meeting to plan the 2015-2016 year and we are very proud of our past, but also excited about our future.

PINK: Share, if you will, some of your personal goals for the future.

Elizabeth: One of my personal goals as president is to increase our presence in Beaufort County by continuing to expand our service projects south of the Broad. I would also like to bring some of our past members back into the fold as sustainers. Sustainers are a category of membership within the League, made up of women who have served their time so to speak, but continue as members in an important, but scaled back capacity. I want to see them more involved. Also, we have a fun new project in the pipeline that I cannot discuss as yet. If it works out, we can expect to almost double the funds we currently grant to the community. Very exciting stuff!

PINK: Tell us about yourself. What are your core values and what has brought you to your strong belief and commitment in service to others?

Elizabeth: This one is hard for me, Judith, because I am generally a private person whose mamma taught her it is impolite to discuss oneself. I will say that I am deeply Christian and believe in giving back. It is as simple as that. My parents were both deeply involved in the Charleston community and I was reared that it’s one’s duty to give back. The added bonus is that it brings such joy. I am blessed to be in a position to give back to Beaufort, which is a wonderful place that has given so much to me.

"We are an organization of women devoted to serving the women and children of Beaufort County."
- Elizabeth Klosterman

The group celebrated 10 years of service with a reunion bash at the Lucy Creek Dockhouse House on June 27. All present and past league members were invited.

The League membership welcomes all women to apply for membership. They come together once a month for a general meeting and are assigned various volunteer commitments throughout the year. Please see their website at www.juniorserviceleagueof beaufort.org for further information.

I must share one last item that really exuded Elizabeth’s enthusiasm and commitment to Beaufort. She said: “Our son’s birth was part of a small baby boom. Specifically, 11 Beaufort couples, who are all friends, had 11 baby boys between March and October of 2014. Nine of them were born to Junior Service League members. Watch out Beaufort!”