Against All Odds They Followed Their Hearts 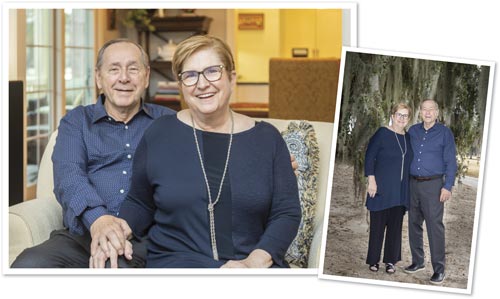 They met on Monday, married on Saturday and 57 years later, Eileen and Robert Hutton are still married and very much in love.

“We met on a picket line,” Eileen chuckled. She and Bob both had jobs at Montgomery Ward Department Store in Detroit. Bob had just gotten out of the Air Force, and she had just finished her first year of college. Then Retail Clerks International went on strike, and they were among the picketers.

“This man kept saying stupid stuff to get my attention, and I slapped him down, verbally, of course,” Eileen said. “He kept on, so I slapped him down again. I was a good little girl from the right side of the tracks. I was Catholic, had only attended all-girl schools, and he was from a split family, lower class and was a bit of a player. On the third day, he said his buddies told him that he had a thing for me, and we should get married.”

“I led such a sheltered life, his bad-boy reputation was attractive,” Eileen continued. “Physical attraction was part of it, especially at 18 years old. I still am attracted to him. It wasn’t love at first sight, it just seemed right that we be together. I was barely legal—at 18 I didn’t need my parents’ permission. He was 20. My parents didn’t even acknowledge we were married for three years. At family gatherings they would just shrug at him and pretend he wasn’t there. So we became everything for each other. Our friends said it wouldn’t last six months. I think it’s because we were so ostracized at first that we grew closer because we were there for each other and cared for each other.”

Eileen said they proved everyone wrong: “We are good impulse buyers with no buyers’ remorse.”

“He still makes me laugh. The magic in our relationship is the incredible respect we have for one another, our abilities and our brains. He’s always been my biggest cheerleader, and I’ve always been his.”

The early years of their marriage were tough, but they followed their hearts and supported each other. Bob worked for a heavy equipment company, and Eileen got a job at a credit reporting company. “We didn’t have two pennies to rub together, and we ate a lot of spaghetti. Friends gave us furniture. Our rent was $50 a month back then. But love grows, friendship grows and you get to know your partner better than you know yourself. You know what the other needs and wants, and you fill it,” Eileen said.

One of Eileen’s fondest memories from the early years of their marriage was when they bought a new Mustang from her uncle’s dealership. They took a road trip with another couple to camp in the Upper Peninsula of Michigan. They rented rooms at roadside motels when they needed showers. Eileen said her eyes were opened to a new world during that trip because she had never traveled before.

Over the years, Eileen and Bob traveling—for both business and pleasure— became a big part of their lives. “After getting married three times, he still owes me a honeymoon,” Eileen laughed.

So what’s her advice for a successful marriage? “You must have a willingness to work on a marriage to make it right for both of you. I think people have unreal expectations—a movie image of the perfect man or woman. If you wait for a fantasy man, you’ll never find him. If you’re waiting for someone to make you happy, you’ll never be happy. It’s your job to be happy and to do your part to make the relationship work. Follow your heart, stay true to yourself, and take care of your partner.”

Executive Decisions: Eileen created an industry-leading audio book publishing company and sold it to Amazon in 2007.

All in the Family: Bob is loved by her family and proved himself after a rocky start. He eventually took over his father-in-law’s business.

Generations: Bob and Eileen have two adult children who are also happily married, and two grandchildren.

October Forever: Eileen believes, “October marriages last forever.” She and Bob were married in October, as well as her parents and both children!