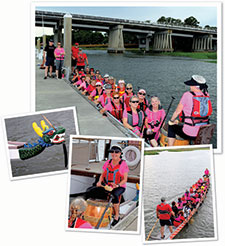 One of the fastest growing water sports in the world has arrived in Beaufort. It’s dragon boat racing, which originated in China more than 2,000 years ago. The first international dragon boat races were held in Hong Kong in 1976 to promote tourism. The fever quickly spread. Some statistics report nearly 50 million dragon boaters in China. There are now more than 90,000 in Canada and the USA, and dragon boat racing is spreading to every continent. Deeply embedded in China’s dragon culture, each boat has an ornately carved dragon’s head at the bow and a tail at the stern. The hull is painted with the dragon’s scales. The paddles symbolically represent the claws. Dragons were traditionally believed to be the rulers of rivers, lakes and seas, dominating the clouds, mists and rains from heaven. A dragon boat team consists of 20 paddlers seated two abreast, a helmsman, who steers the boat from the rear, and a drummer who sits at the front to pound out the cadence for synchronized stroking.

On Feb. 18, 2012, Clare Taylor and Mary Ann Thomas attended the annual Beaufort Film Festival and saw a documentary film entitled “Awaken the Dragon.” The movie examined a group of cancer survivors who found an unconventional path to healing and wellness through the Chinese sport of dragon boating. They were so moved, they immediately decided to create this opportunity for cancer survivors and their supporters in Beaufort. Before the weekend was over, they put together a team, went to a local park and sat on benches to practice paddle strokes with brooms. DragonBoat Beaufort was subsequently formed and incorporated into a 501(c)3 under the Community Foundation of the Lowcountry. The first boat was donated by a friend who had been affected by cancer, and arrived on June 28, 2012, just in time to participate in the Beaufort Water Festival in July. The second boat was purchased last summer with funds from a generous donor and matching individual contributions.

DragonBoat Beaufort provides guidance and encouragement to every cancer survivor so they are empowered to lead a fuller, more physically active life. They also provide funding for patients and their families for items that are not covered by insurance, such as transportation, nutritional supplements, daycare, medical supplies and dental treatment.

Three years ago, Kathy Haas was feeling isolated, weak and depressed. She was in the throes of radiation and chemotherapy for treatment of stage 3 breast cancer. One afternoon she received a phone call from an enthusiastic friend who had just seen the “Awaken the Dragon” film and learned about DragonBoat Beaufort.

“Do I have something for you,” she told Kathy. Excited, but nervous, Kathy went by herself to the Port Royal Landing Marina to check it out. She recalled, “When I first arrived at the dock, I felt like a fish out of water. I didn’t know if I could do it. But I immediately felt welcomed. I found paddling on the water a physical, mental and spiritual place to go to feel better. All your thoughts and cares go by the wayside.”

Participating in her first dragon boat race was a turning point in Kathy’s life. As her husband looked on and cheered, he wept. Kathy is passionate about the hope and support dragon boat racing can provide to people with cancer and their families. She and Angie Calhoun have become directors of DragonBoat Beaufort and are responsible for fund-raising.  Alongside head coach Joy Craig, an internationally seasoned dragon boat racer, Kathy is now a team coach, cheering others on in their journey.

Dragon boat teams are made up of both males and females. A cancer diagnosis is not a pre-requisite to join. You can be a spouse, family member, friend, or someone who wants to support the cause and have a good time. The minimum age requirement is 16. Practices are held at the Port Royal Landing Marina on Wednesdays at 6 p.m. and on Saturdays at 9 a.m. Everyone is welcome to come and try it out for three times before joining. Information about sign-up and membership are available at www.dragonboatbeaufort.org. DragonBoat Beaufort has members ranging in age from 18 to 82. There are opportunities for competitive, as well as recreational paddling. DragonBoat Beaufort won a silver medal in Charleston in 2014. This year the competitive team plans to race again in Charleston, Georgia, North Carolina and Florida.

The 60th annual Beaufort Water Festival will feature dragon boat racing on Saturday, July 25 from 8 a.m. to 4 p.m. at Beaufort Waterfront Park. There will be an opening ceremony, three heats of races, a carnation ceremony for cancer survivors and their families and a closing medal ceremony. Last year’s race drew 28 teams from three different states. There is still time to form your own team. All equipment and instructions are provided. Come to the races and unleash your inner dragon!