Heart to Heart with Lowcountry's Only Female Cardiologist 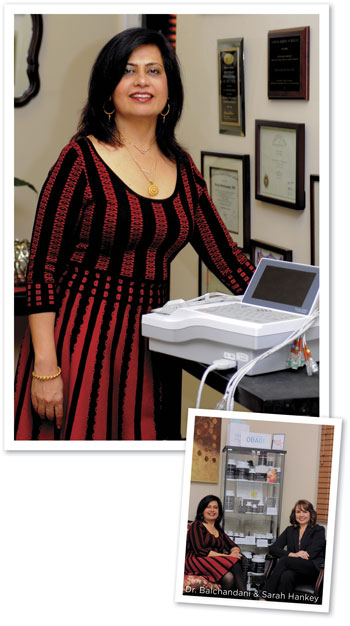 When she was a young girl, Dr. Ravina Balchandani wanted to be a flight attendant. She thought it would be a glamorous career filled with travel and exciting adventures in exotic places. Two events had an impact on her decision to pursue a career in medicine instead. One was personal, and the other was an incident of epic proportion.

The personal part was the decision made by her father. He told Ravina she was a good student and would become a doctor. Although this turned out to be the correct path for the gifted, popular, and prominent Lowcountry cardiologist, the forced decision put a strain on their relationship for a time. A compromise was finally reached between the two: She would continue her education to the completion of her medical residency, and then she could do nothing with her degree if she so chose. Ravina continued her pursuit of a medical career. Now, passionate about her work and her patients, she thanks her father every day for making her stay in medical school.

The event of epic proportion was the Union Carbide gas tragedy in Bhopal, India in 1984. Experts have viewed this incident as “the world’s worst industrial tragedy.” A horrific gas leak occurred on the nights of December 2 and 3, 1984 at the Union Carbide India Limited Pesticide Plant. Over 500,000 people were exposed. The death counts vary from the official toll of 2,259 to the government number of 3,787. In 2006, the numbers were adjusted to reveal 8,000 died within the first two weeks following the catastrophic leak, and an additional 8,000 from gas related diseases. The impact of this event has stayed with Ravina through her years in medical school and residency in India to today.

Following her residency, Ravina, now Dr. Balchandani, made the decision to move to the United States. This move meant taking a few steps backward in her career. She was required to repeat her residency in the USA. She also had to take a series of tests in order to qualify to practice in America. Within a year, during which she was pregnant with her daughter, Rinsha, the young physician passed each test with flying colors and then spent the next 11 years practicing at Long Island Hospital in New York as an Interventional Cardiologist. After doing some research, she found a need in South Carolina for an Interventional Cardiologist. Her move to Hilton Head Island followed.

Interventional cardiology is a branch of cardiology that deals specifically with the catheter-based treatment of coronary heart disease, such as angioplasty and stents. A woman in this field is unique. Many times, Dr. Balchandani recalled, there were more than 50 men to her one woman.
For an interventional cardiologist time is very important. “Getting a patient to the cath lab,” she said, “is similar to playing Beat the Clock.” Time constraints are critical to patient care and recovery. On weekends and holidays, she must arrive and perform the procedure and restore blood to the heart with a limited time window of a few minutes.

Having established and owned her own private practice, Heart Association of Hilton Head, LLC, she’s  observed for years the interactive, negative correlation between obesity and heart issues, such as high blood pressure, sleep apnea, and a myriad of other symptoms. Dr. Balchandani has found an additional direction for her focus of heart and health. She formed a partnership with Integrative Health Coach, Sarah Hankey, and together they created NuBODIA, a clinic that focuses on wellness as both a way of life and preventative measure. The team works not only with patients who have had heart issues, but also with those whom they hope to help avoid the pitfalls and health dangers of obesity. Prevention is their focus, providing a healthy avenue to weight loss. But it’s not just about the pounds; it is about the whole person. It is a full body and mind process. Each client/patient receives a plan tailored to their specific needs, because when it comes to weight issues and health plans, one size does not fit all.

The passion of both Dr. Balchandani and Sarah was clear; talking about successful client/patient results brought smiles to both of their faces. Their partnership is unique in that the majority of cardiologists and certified health coaches don’t communicate; never mind work together to formulate personalized plans for a clients/patients. With this whole-body approach, NuBODIA clients stay active participants because of the success and results they experience.

Dr. Balchandani’s daughter, Rinsha, joined her mother for this interview, and spoke about her mother’s influence on her as she grew up. “My mother has shown me a woman can accomplish anything she wants to. She has taught me courage to stand up for what is right. I have never felt like I can’t do something because I am a woman.” Seeing the look exchanged between mother and daughter was a sure sign of the love and respect these two women share.

When asked about her free time, Dr. Balchandani’s response made it clear her work is her true passion. However, she finds time for bike riding, rowing, and keeping up with current events.
I asked Dr. Balchandani if there was anything she would change about her life choices. With a smile she replied, “I would not change anything. I would do it all again. It was worth the journey.”

As a Brooklyn native, I couldn’t help but wonder if there was anything Doctor B. misses about living in New York. Again, with a grin she responded quickly, “A good bagel and maybe some shopping.”