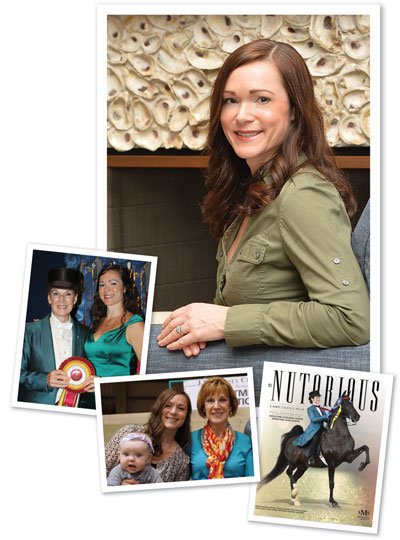 Beautiful is a strong woman. There is much in our news today about movements and standing up for women’s rights; impressive stories of physical abilities, as seen in last month’s Winter Olympics. We may define the word strength differently, but few can dispute the voluntary actions of two women who decided to place the value of their health over fear. One could even say they went in search of what many hope to avoid, warriors faced it, attacked it and became victorious. Sounds like a warriors to me.

Dr. Emily Bollin and her mother, Barbour Childress, embody strength; their actions prove it. Both Lowcountry residents, Emily, or “Bambi” (a childhood nickname she prefers to be called) is a local optometrist at Sungate Medical Group in her twelfth year of practice. Barbour, a horse trainer for 27 years, is now retired. She owned and ran Evergreen Farms in Charleston, WV for 23 of those years; a place where Bambi grew up and developed a genuine love and talent for riding.

Barbour knew well that her family’s maternal history of ovarian cancer spanned several generations. It sadly took her own mother’s life before Bambi was born. This knowledge led her daughter to pursue genetic testing once it became a viable option. In 2007, she consulted with her gynecologist. They agreed to the testing, but recommended Bambi wait until after she had children. This was important for two reasons: Bambi explained, “Insurance may not have covered me, as it would have been considered pre-existing if it came back positive. They were also concerned about the emotional toll it could have on our decision whether or not to have children.”  She took her doctor’s advice, and after her precious children, son, Lakin and daughter, Annette, were born, she moved forward with testing.

Her mother got tested soon after, and both were found genetically positive for the BRCA2 gene. This test shows the most common hereditary ovarian and breast cancer markers. The ovarian result was as expected, but the breast cancer percentage was surprisingly high. “No one in our family had dealt with this breast diagnosis that we were aware of, only the ovarian,” Barbour said.

After a consultation with a genetic specialist, and other experts in the field, it was made clear the best treatment for the greatest percentage of risk-reduction would be bilateral total mastectomy. “We were proactive, together,” said Barbour. In November 2016, Bambi successfully completed the surgery. Barbour had the same procedure in January 2017. Each was one another’s caregiver immediately following the surgery.  “The first three weeks were the toughest,” they agreed. “But I was playing golf after just a few months,” Barbour said.

“The day of surgery was a little emotional,” Bambi admits. But when asked whether it was a question of ignoring the BRCA results and hoping for the best, or even taking less extreme measures, each responded in a similar fashion. “The medical field is amazing. Have the genetic test. Be proactive. It will change your story and your life,” Bambi exclaimed. Barbour responded in a similar way saying, “I am simply amazed at what genetic testing can tell us all. I will be interested to see what the next five years hold in terms of advances.” Their risk factors went from 83 percent, down to less than five percent. Absolute. Impressive. Strong.

Rochelle Ringer, M.D., who specializes in breast health and surgical oncology, praises this mother-daughter decision. “Information is power. With genetic information, we can act and literally save lives,” she said. Dr. Ringer is affiliated with Hilton Head Hopsital and is an Associate Clinical Professor of Surgical Oncology at the Medical University of South Carolina and a member of the MUSC Hollings Cancer Center Comprehensive Breast Care Team.

With respect to the ovarian cancer gene discovered on their BRCA test, Barbour had a hysterectomy when she was in her 40s, due at that time to the family history information alone. Bambi will have this same procedure soon. It is important to note both were tested via mammogram and ultrasound to determine if any cancer existed prior to their surgeries. Neither had any incident.

Mother and daughter sought out potentially difficult information, researched their options and took action to dramatically improve their circumstances. Now that is powerful.

They say knowledge equals power. I say add action to the equation, and we have a fearless twosome of strong women with a love for life and one another. Beautiful.

Up Close:
Bambi...
Outrageous: Has been riding since the age of 4, and continues to ride English Saddlebred competitively to this day. Hence…
Blue Ribbon: World Champion Amateur Park Saddlebred! Won 2 Reserve World Championships!!
Horse Love: Has a horse she loves named Nutrageous
Eye Love: Married 12 years to husband, Nick, who is also an Optometrist.
Quote Me:“My mother and I are very close. She is such a strong and independent women, who taught me by example how to take care of myself”

Barbour...
Passion for Horses: Loves attending Horse shows!
Green Thumb: Avid gardener.
On Par: Enjoys a day on the golf course.
And I quote… “Did I tell you what a wonderful mother Bambi is? Nick is a fantastic father, too.”
And another… “My daughter is not only strong, she is also a wonderful young lady, passionate about her family and friends. I’m proud to be her mother.”

Current information on advances in the field of genetics is plentiful.  Cancer.gov is a brilliant resource.