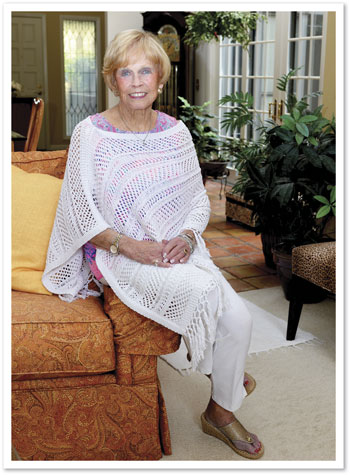 On January 9th, a birthday celebration was going on at Reilly’s South on Hilton Head Island. This was no ordinary party though; it was dedicated to Dorothy “Dottie” Parker Patten as she celebrated her 85th year of life!

I had the honor of being a guest at the party, and after getting to know Dottie over the past six months, I realized she has quite a story to tell. Her authentic smile, genuine laugh, and kind heart have been through so much.

In 1934, Ernest and Edith Parker gave birth to their second daughter in Winchester, Mass. Dottie and her older sister, Betts, had a nice life in the Boston suburbs, where Dottie spent years as a dedicated Girl Scout. She was a goal setter from early on. Her Girl Scout troop was invited to spend seven-weeks in Europe as a Winchester, Mass., ambassadors. Ten girls and three leaders were heading to Winchester, England, but it was going to cost them each $700—an insurmountable amount of money then!

Dottie knew she had to go on this trip, and through babysitting jobs, working at Filene’s, and helping her troop run an auction, they earned enough money to get them to Europe. In the summer of 1950, they set sail on a converted troop ship and headed for England. It was the trip of a lifetime!

Dottie graduated from Winchester High School in 1951 and went to Wheaton College to study psychology. Two years later, she transferred to Simmons College to be with her sister. During college, she continued to work at Filene’s and changed her major to merchandising through the Prince School of Retailing. When she graduated in 1955, she married a University of New Hampshire frat boy named Richard “Dick” Patten, who was in the ROTC. They found themselves heading to the Air Force base in San Antonio, where Dick began flight training. His next assignments took them to three more bases and bestowed upon them three children, Doug, Sue and Sandy.

The young family made one more move to Tewksbury, Mass., where Captain Dick retired and went to work in the family business, Patten and Co. Greenhouses, where three generations of florists grew the largest supply of carnations in the Northeast. In 1966, they welcomed Kim, their fourth child to the family. As much as Dottie loved being a mom, her marriage was challenging. In the 60s it wasn’t okay to talk about abuse or alcoholism, so she didn’t. She smiled; she loved her children; she kept a beautiful home; and she stayed with Dick.

In 1973, North Meadow Tennis Club opened, and Dottie became the hostess. As much as Dick enjoyed his wife contributing to the household income, he didn’t care for the attention she was receiving, and life became more troublesome. Dottie realized in order to survive she needed to make a big change. It was difficult. How did a mother of four escape in a time when women had no voice? With the help of her friend, Chuck Vurgaropulos, Dottie very courageously contacted the authorities to report what was happening. Her divorce was finalized in 1976, and in 1979, Dottie moved to Hilton Head and has made it her home for 41 years.

When she knew she had to leave her marriage, she packed up her ‘75 Pinto with her mom’s Christmas cactus, her Hummels, some clothes, and her only minor child, Kim, age 12. She describes life before Hilton Head as lonely and friendless, and she knew made the decision to not only survive, but to rise. She expected to find a full life in Hilton Head. But first, she had to find a house and a job. Nothing could stop her!

Dottie had no idea she would spend years in the food and beverage industry, but she loved the people she met, the restaurants she helped run, and security she never knew existed in her previous life. From her first job as hostess at the old Calibogue Café to bartending and waitressing at the Quarterdeck, the Gold Eagle Tavern, Hilton Head Inn, where she worked at the Crow’s Nest, the Chart Room, and the Audubon Room, Dottie knew she was home. She catered and bartended at the Family Circle Tennis Tournaments and the Heritage Golf Tournament! She glows as she shares stories about meeting Pat Conroy, Kenny Rogers, Bob Hope, and working as a nanny for tennis star Evonne Goolagong, who became a wonderful friend.

Her years in Hilton Head have been joyful, but leaving her children broke her heart.

After staying a year, Kim missed her siblings and returned to Tewksbury. Dottie’s children visited her Labor Day weekend in 1979, after which she was positive they would never come back. Over time they did, and eventually understood she had to move for all of them to have a better life. Now they appreciate the sacrifices she made and say she is the strongest woman they know.

In the 1985, the Market Street restaurant opened in Coligny Plaza, and Dottie became the manager. This is where she discovered baking. She became well known for her fabulous desserts, and many claim she was (is) the island’s best baker! In 1997, after 25 years of service, she decided to work in catering again with Bess Soper, longtime owner of Bess’ Deli and Catering. She and Bess worked together for 16 years.

I ask her to describe her time with Chuck, the owner of Market Street, and she says in a sense, he saved her. He was the only one who told her she deserved better, and he knew she was strong enough to find a new life in a new town. He helped her find a lawyer and tell her story. He was good to her children and he applauded her for surviving. He introduced her to the island and to a career that sustained her and brought her unimaginable happiness.

Dottie eventually married again in 2001. As I’m about to ask her about husband Ken Ferreira, she stops me and begins to tell me about “one of the best things she ever did” and grabs a photo from the cabinet. I’m looking into the beautiful face of Dottie holding the Miss South Carolina Senior 1999 2nd Runner Up trophy and smiling from ear to ear. I can’t wait to hear the story!

One gray and overcast afternoon Dottie went to have a bite to eat and met Carmen Bonsignore, a Miss Senior America contestant, who had recently been crowned Miss South Carolina Senior. As they sat and chatted, Carmen said, “When you turn 64 you have to be in the Miss South Carolina Senior pageant.” Dottie politely said that it really wasn’t on her radar, but Carmen insisted and started asking Dottie about her talent. Finally, Dottie said she would give it a try and told Carmen  she was actually 68! She started taking a few dance lessons, invited her sister to come down as her support system, and went to the pageant. “It was absolutely one of the best things I’ve ever done. It restored my self-esteem and boosted my ego!” she said.  She was asked to write an essay on her thoughts about life, and she opened up and spoke honestly and eloquently. She danced. She answered the judges’ questions. And she found her smile again. She was beyond humbled to be selected as the 2nd Runner Up for the state.

She was ready to take on a new century and as the 2000’s rolled in, Dottie found life was treating her well. She was newly married and joyous with her career. Her children, along with her eight grandchildren, regularly visit her. She often reflects on a life well lived and sometimes imagines what would have become of her life had she stayed up north.
Today, although she and Ken separated last spring, Dottie is thankful for her sincere friendships, a lifetime of memories, a beautiful family, and an island that brought a family in complete disarray back together again. Hilton Head Island is the land that breathed life into Dottie and empowered her when she fled from a season of dust.

Today, you can find Dottie enjoying good food and good wine at one of her favorite spots: Pool Bar Jim’s, the Sage Room, Charlie’s L’Etoile Verte, or listening to some jazz at the Jazz Corner on a Sunday afternoon. She continues to dance, attend movies, and she enjoyed another St. Patrick’s Day in both Savannah and Hilton Head this year.

Dottie’s story could have turned out quite differently, but because of her strength, her courage, and her tenacity to survive and succeed, she is now living proof there is nothing a strong, smart, beautiful woman can’t do when she is determined to rise.