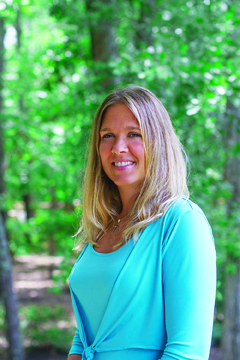 Dianne Kosto is a beautiful woman on a serious mission. She is an advocate and practitioner of BrainCore Therapy neurofeedback. Reduced to its simplest description, neurofeedback-also known as biofeedback-initially uses a QEEG (quantitative electroencephalogram) to measure an individual's brain wave patterns. Then, an individually tailored program of guided exercises for the brain is used to restore balance to an unhealthy, dysregulated brain pattern by permanently retraining the brain to create new neural pathways. Dianne talks about her work with the calm assurance of an expert. But when she discovered BrainCore she was an exhausted mother, desperate to find something to help her son after everything else had failed.

In third grade, William, who is now 15-years-old, started having behavioral problems. He had impulse control issues, he refused to do timed math tests, he was not engaged at school. He had always been well liked by students and teachers, but it was as if he now had two opposite personalities. At the time Dianne was a single mother to William and his brother Jack, who is two years older. Their father had been abusive to both boys and was now completely out of the picture. Dianne, who was diagnosed with rheumatoid arthritis at age 19 and later with fiber myalgia, was determined to give her sons a stable and supportive environment. She responded to William's increasing problems at school by homeschooling both boys.

Dianne was uncomfortable labeling her son's behavior and unwilling to succumb to the advice that she medicate him. But as William got older, she felt inadequate in controlling and restraining his behavior. She sent him to Camden Military School in Camden, SC. The administrators called her and told her he wouldn't comply with school regulations and had to leave.  She then sent him to Abundant Life Academy, a Christian school in St. George, Utah that serves struggling teens from 13-18.  Again, she was called and told that William was on probation and had only one more chance.

Here in Hilton Head, Dianne had remarried. She had also been introduced to Dr. Guy Annunziata who made her aware of neurofeedback as an effective, drugless, non-invasive treatment for neurological based conditions, which include ADD/ADHD, learning disorders and impulsivity issues. Dianne intuitively felt this was the right track.  At Dr. Annunziata's recommendation, she had intensive training in the BrainCore Therapy neurofeedback system, packed the equipment in her car and traveled cross-country to Utah where she rented an apartment for five months. In cooperation with the academy, she took the QEEG for all 50 of the resident students, including her son William.


According to the BrainCore Therapy brochure "depending on your mental state, your brain produces four distinct brainwaves. Beta waves are produced when you are alert and externally focused. Alpha waves are produced when you close your eyes and relax. Theta is produced briefly when your start to fall asleep and Delta waves occur when you are sleeping." After 40 years of research, it is evident that high magnitudes of certain brain waves are associated with specific neurological conditions. For example, high levels of theta waves are associated with attention and focus issues and learning disorders; high level beta waves produced symptoms associated with generalized anxiety, panic attacks and insomnia.

The teens at Abundant Life Academy had individual histories and incidences that brought them there, but each child had social issues, was drawn to drugs and alcohol and had extreme difficulty with impulse control.  After evaluating the QEEGs of several students, Dianne thought maybe her machine was malfunctioning; each one showed a dysregulation in the theta/beta ratio.  As a control she tested herself and the school administrator. The machine registered their brain waves within the normative range. The machine was fine.

After a couple of weeks of 30 minute treatment sessions using guided exercises on a computer screen, William reported how he felt by drawing a smiley face. For the first time he was able to concentrate in a sustained, linear way. Having never experienced concentration, he didn't know how to describe the lack of it as the source of his frustration and inability to stay engaged at school.  Dianne says, "After identifying William's brain patterns I was able to develop exercises that created new and permanent neural pathways. Forty sessions for 45 minutes each saved his life."

Compressing Dianne's and William's years of struggle into a page of paragraphs can't convey the day-by-day anguish, fear and frustration they experienced. It doesn't reveal the hardship that Jack must have suffered as the older brother. The inability to find the remedy and support for a troubled child is a grinding, enervating pain for too many families. Dianne lived it. She used up her savings, and continues to pay off the debt she incurred trying to fix it. Nothing else worked. BrainCore Therapy did.

Her mission is to make people aware so they don't have to spend futile years searching. She likes to quote Dr. Frank H. Duffy, professor and pediatric neurologist at Harvard medical school who says, "In my opinion, if any medication had demonstrated such a wide spectrum of efficacy [as neurofeedback] it would be universally accepted and widely used." William now has a sense of freedom he never knew. Dianne says, "I can just see that he is happier in his own skin. He is a bright light." Her gratitude has given her life a direction.


Up Close & Personal
*Silver Lining:  Jack's passion was the electric guitar. He finished high school early and at age 15 entered the Berklee College of Music, Boston, MA
Design Sense: She has two fantastic ultra-modern lamp/sculptures in her office. Very cool. Personal Design Sense: She proves even a professional woman on a mission can be chic! Love the blue nail polish.