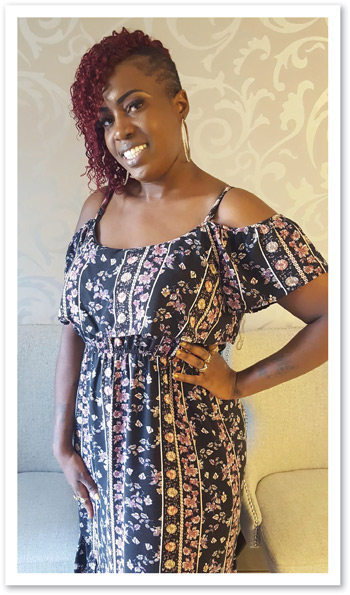 Denice Brown is a fighter. She moves through life with a positive attitude despite it all. The monumental hardships Denice has endured compares to the worst of the worse. She is a fighter—optimistic and tenacious. Despite it all, she not only gets out of bed each morning, she manages to get through most days passing along her bright smile, which can easily light up a room.

At the innocent, sweet age of 2, Denice was struck by tragedy. Her mother was murdered. She said she was too young to remember any specifics or consciously feel loss. Family members helped substitute the care and love she would have received from her mother. However, at age 5, Denice experienced yet another matriarchal loss. She raced home to her grandmother’s house after school, where she did her nightly homework. Joyfully calling out for her grandmother, she walked down the long hallway, searching every room in the house. Denice found her grandmother on the floor, deceased. She had suffered a stroke. This was the first time Denice remembers grief.

Like most children, Denice’s resilience got her through each day without her mother and grandmother by her side. However, one cannot experience this magnitude of loss without a few emotional scars. She finally got to a good place in her life, not knowing history would soon repeat itself.

Fast forward to Denise being grown and married: In 2005, she was living in Florida with her husband at the time. When he got into a quarrel, his rival fired two gunshots, aiming for him, but instead, the bullets hit Denice, entering into her arm and back. This took her rank in the war of life from a fighter to a warrior; but no warrior could cope with the calamity that was on the way to bang on Denice’s door.

In 2016, merely two years ago, her husband, brother and father got into an argument. Things escalated, and her husband was so enraged, he shot her brother. Like dominos falling one after the other, the next shot fired killed her father right in front of her and her children. Naturally, she felt the wind knocked out of her. She was left in a state of hysteria, not knowing her next move. Her brother survived.

She filed for divorce, put on a good face and continued with her life. “My motto is never give in and never give up. I wasn’t going to give into the pain and give up my life, no matter how hard the state of affairs was. I felt like crap, but I had to put that good face on for my kids, to show mommy has no weakness,” Denice said, like true fighter.

Denice misses her father everyday. He left behind a legacy of values, including a strong work ethic, which Denice learned as a result of working on her father’s farm during her childhood. “Hard work doesn’t affect me like other people; it built my character. Look at me now.”

After her father passed, she decided to work seven days a week. “My person I counted on isn’t here anymore; he provided so much for me. I work hard so I can keep my mind off my grief and stay focused on providing for my children. They are my rock. They are the reason I am getting through this,” Denice expressed. Her family and brother have been there for her as well.

Against all odds, Denice still has an optimistic view of life. Her perpetual bubbly personality overpowers the pain. She loves her jobs, working as a hairstylist at Chez Michelle Hair Salon on Hilton Head Island, and occasionally filling in at Great Clips.

“Denice has raised the bar for us all with her conduct, both personally and professionally, particularly with her positivity and resiliency,” said Michelle Casey, Chez Michelle Salon owner.

Denice is ready to be officially divorced, although, she admits she never thought she would be a single parent. The divorce and court hearing will hopefully start to suture the gaping wound from this experience, leaving no oxygen for this nightmare to thrive.

Remembering and thinking about her father everyday, Denice tries to not get lost in the grief. She remains steadfast, biding by the values she knows for sure: Staying strong, determined and loving—three words, that against all odds, she has taken to new heights.

Grandma’s Traditions: “My grandmother would make homemade biscuits. I make those same biscuits for my children; it’s my favorite recipe. I also make red velvet cake and pound cake from her recipes. I love cooking. My favorite TV show is Chopped.”

Family: Denice’s children: daughter, 8; two sons, ages 5 and 2. They are her support system and what keeps her going.

What she’s known for: “I’m known for my big smile. With everything I’ve been through, my big smile still hasn’t changed!”

Speak out: Denise is honing her speaking and leadership skills as a member of Toastmasters International on Hilton Head Island.