Abba Dabba Can Do 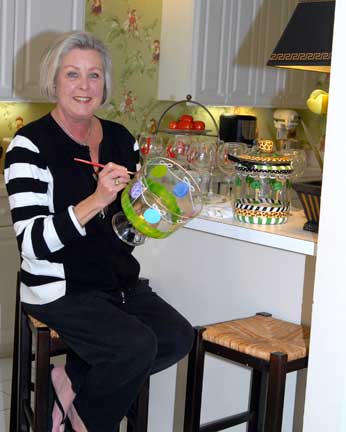 Debbie Coggins is a self-taught artist and designer with "forty-five things going on at any given time." She takes pleasure in outrunning boredom.
Debbie hand-paints all kinds of surfaces whether it's glass hurricanes, stemware, furniture, fabric, or walls. Her keen eye recognizes strategic elements in a fabric, for example, so she can then transfer that feature onto a chair, another fabric or a wall. One enthusiastic client tapped into her talent for faux finishes by asking her to paint an oriental rug on a floor, which she did with confidence. After all, she's the artist you would call if you wanted to make wooden spindles look like metal, and vice versa.

Debbie has been painting things all her life. When she was a teenager, instead of pleading with her not to throw a party in their absence, Debbie's parents begged her not paint anything. Typical teenager rebellion, in this case, resulted in a redecorated living room.

"When I was in high school, the decor at the time was French provincial. The only gold paint I could find was my brother's car paint, which transformed our mantel from a boring natural wood finish into a stunning white and gold French Provincial accent piece, or so I thought," laughed Debbie. "Car paint is extremely durable. We had to live with it. "

If she didn't work two days a week for friend Debbie Timen, the owner of the gift shop Lettrs at Main Street Village, Debbie says she would paint 24/7, and she would do it from a corner in her garage as opposed to a studio. Although her hand-painted work is featured on numerous items sold at Lettrs, she doesn't let customers know she is the artist. This way she can appreciate the clientele's genuine reactions.

Debbie's husband John works and lives in Saudi Arabia, which means Debbie also has to outrun loneliness. In most cases, a dog couldn't fill the shoes of husband, but Debbie Coggins seems to have found the perfect companion pet. Scout, a golden retriever and former service dog, happens to have character traits similar to her absentee husband.  Debbie said, "This wonderful dog out-thinks me. He stands by my shower door, not because he has to, but because of his training. He's very attentive, just like my wonderful husband."

In between home visits, Debbie and John take advantage of Skype twice a day, the free, internet-based, software application that enables people to visually connect and communicate anywhere in the world at no cost. Each morning at 7am. Debbie catches up with her husband on a computer screen. For John, that means he goes to his computer at 2pm. The same thing happens again at 2pm. (her time) and 9pm. (his time). Debbie is looking forward to John's three-week visit in April and May. If for some reason he can't come home, they will meet in London for a week or so, which Debbie said would be a perfectly acceptable substitute for a home visit.

Debbie has surrounded herself with a network of great friends since moving to Hilton Head from Charleston six years ago. "I'm never lonely," Debbie admitted. "In a bigger town, I might not have felt this way."

Like many artists, Debbie takes inspiration ubiquitously. Her business is called DÈj‡ Boo, a name that stuck after hearing her three-year old granddaughter say, "DÈj‡ Boo, Abba Dabba!" (By the way, Abba Dabba is the grandma name Debbie Coggins stole from Debbie Reynolds after the actress revealed her wacky grandma name in an interview.) When Coggins realized her business features all the things she's done in the past, combined into one thing, the name made perfect sense. Been there, done that and doing it again. DÈj‡ BOO!