I Don’t Know When I’ll See You Again 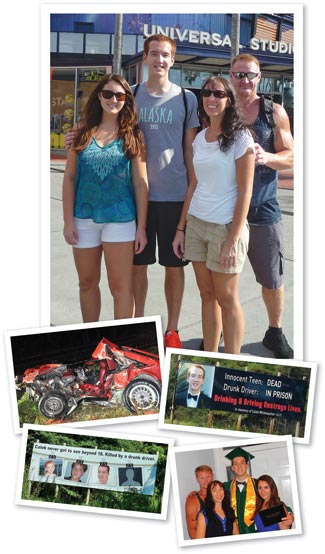 It’s said that “time heals all wounds” but anyone who’s lost a child would be quick to dispute this. Because the truth is, no amount of time can mend the hole left in the lives of those whose child has passed. This kind of loss shatters the reality that previously existed and forever changes the future. The ensuing grief doesn’t come with an expiration date. There is no “moving on.” The best a parent can do is cope with the pain and keep their child’s memory alive —protecting that memory like a mother bear—refusing to let even death itself dim the light their child was brought into this world to shine.

On January 6, 2017, Christine Whiteleather said good-bye to her son, Caleb, for the last time. A freshman at Winthrop University, he was heading back to college after the holiday break. “I gave him a hug and told him all the things moms tell kids, like ‘drive carefully’ … ‘text me when you get there.’ And then, before he left, I said, ‘Let me give you another hug because I don’t know when I’ll see you again.’ And so, I hugged him again, told him good-bye, told him ‘I love you, Caleb,’ and he told me, ‘I love you, Mom,’ and he left.”

Less than an hour later, Caleb was hit head-on by a drunk driver on S.C. 462 (Lowcountry Drive).

A red-headed left-hander standing 6’4” tall, Caleb was truly one of a kind. And like the unique combination of his physical traits, his personality was equally notable. “As a kid, he was very active, very curious, always wanting to know things and learn things … he loved to read … to be outside … whether it was swimming or riding four-wheelers or snowboarding …. as long as he was moving, he was good,” his mother said.

Similar to the Biblical figure after whom he was named, Caleb (meaning “faithful”) had a marked determination. “He loved playing soccer,” Christine recalled. “He didn’t make the soccer team at first, so he was playing on the rec league … but he really wanted to play on the high school team. He started to work out on his own, go to the soccer field, do drills.”
Caleb’s perseverance paid off.

“He wasn’t the fastest player … but his character made both of his coaches, junior and senior year, want him on the team. His character, his encouragement of other players, and giving 100 percent. I was always very proud of him for that. He didn’t give up.”

Starting college, Caleb’s focus shifted to business. He enjoyed reading about people like Sam Walton and how they reached their goals.

“He was always trying to better himself. That’s why I know he would have been successful,” said Caleb’s mother. “He was a self-learner. He wanted to learn things beyond the classroom.
“During Christmas break, we talked about him double-majoring in Spanish … and he had planned to study abroad. He’d narrowed it down to Spain or Argentina. He had his appointment set with the advisor and everything.”

Since his death, Christine and her husband have posted DUI messages on a billboard at the site of Caleb’s passing on SC 462. Many DUI messages highlight the individual consequences of drunk driving—showing handcuffs, a jail cell, a wrecked vehicle — but Christine and her husband make their messages personal. They want passersby to see their son’s face, relate to him, and think about the future that was taken from him. Their messages stress that drunk driving is more than a ticket. It’s more than an accident. It’s a choice whose consequences can impact innocent lives forever.

“The billboard is a memorial to him, but it’s also a message that drunk driving deaths are preventable,” Christine explained.

Before relocating to Florida, Christine spoke at Bluffton’s pre-prom events, reminding students, “The decisions we make affect the lives of other people. We aren’t in a bubble by ourselves in this world.”

She’ll never know the answers, of course, because one man’s choice to drink and drive robbed her of that. But she still considers the possibilities. And she hopes that by sharing Caleb’s story, even just one more tragedy of this kind can be prevented.