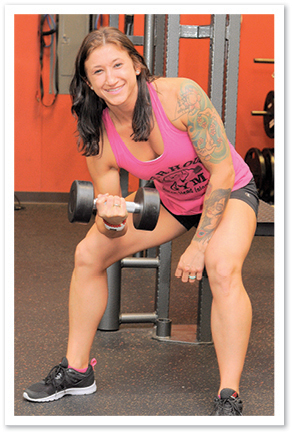 I’ve always thought Pink should run a monthly “Badass Woman” feature. I mean I know we’re all pretty badass, but I love it when I meet a woman headed down to Biker Week on her Harley or a woman who’s running a five-minute mile or serving in the Marines, a woman who reminds me that I can be and do anything. That’s why I jumped at the chance to cover a story on Christel Valentino, a local body builder and all-around amazingly cool woman.

Looking at Christel, I’d have guessed she was born in the locker room of Powerhouse Gym, and her mom put protein shakes in her baby bottle. I was shocked to learn that she’d never even stepped foot into a gym until 2009. Like many people, she was terrified of the gym. Even though she’s always been pretty lean, she’d never considered herself particularly athletic, and she’d never been toned or muscular.

It wasn’t until the weight of grad school was wearing on her that a roommate suggested she try working out to relieve some stress. “The first workout we ever did together was leg day—squats, and I never looked back. I was totally addicted to the gym after that,” Christel said.

Christel’s dad was a retired Marine who worked out a lot. He was a bodybuilder, not competitively, but as a hobby. Growing up, Christel only saw her dad about once a year. “When I started working out, it was something we had in common and that was cool because I didn’t grow up with him in my life. It brought us closer.” She even moved up north to be near her dad until he passed away in 2012.

She’d seen girls who’d done figure shows and thought it would be cool to do that someday, but wanted to get her personal training certification first. The day she passed her exam, she walked into Powerhouse Gym looking for a job, and Managing Partner, Terri Reiff hired her on the spot. Christel is now the Assistant Manager/ Nutrition Specialist/ Sales Manager/ Certified Personal Trainer/ Body Building Specialist and is currently working on her Women’s Fitness Credentials.

In February of 2014, another one of the personal trainers from Powerhouse, Chris, was training for a show that May, and he encouraged Christel to give it a shot. It was just the push she needed. “I got top ten, but it was my first show, and I didn’t know the model poses at all. I only knew the quarter turns, and the high heels we have to wear are absolutely ridiculous. They’re like stripper shoes,” she laughed. “You’re up there pretty much exposed to the entire audience. It was an experience.”

Christel went on to tell me about the custom-made $300 bedazzled bikinis they wear. Stop. Right. There. Have you seen those bikinis? For the first time, I consider this sport (not for myself—unless they have a Spanx wearing category), but I consider what it takes to stand on that stage in front of a group of judges for side-by-side comparisons with other women. That’s about as brave a sport as I can imagine, but it’s not a beauty contest. Rather, it’s more like a science of diet and exercise, a challenge in commitment and self-discipline. This is her passion, and it’s contagious and encouraging and inspiring.

We talk about her competitions and her time off to have a baby. “I was trying to put on more size after my first show. It takes a while, and I didn’t feel like I was big enough at the first show. That’s when I got pregnant, and I had to take extra time off. They don’t have a maternity division, but if they did, that would be pretty awesome,” Christel said. Her doctor advised her to keep going, warning her she would be miserable if she quit working out. She did cardio three to four times a week, walked eight miles every Sunday and squatted 145 pounds up until about two weeks before she delivered.

We talk about her current workouts and meal plans: 135 pound warm-up squats followed by 3-4 sets of 15 reps with 225 pounds, maxing out 900 lbs. on the leg press machine, 50 lb. single handed dumbbell presses, and lots of cardio. “I can put muscle on my legs easily, but my upper body I have to really work at. I would get stronger, but wouldn’t show much change in muscle mass.”

Christel learned that in order to achieve some of her goals she had to adjust her diet—high protein from lean meats, high fat (the good fat like avocados and almonds) and low carbs.  “I tell people all the time abs are made in the kitchen.” So are muffin tops, by the way.

The best thing about Christel is her enthusiasm, her willingness to share her knowledge, and believe me, I asked a lot of questions. She’s just this down-to-earth, cool, badass woman. A little time with her will have you considering trading in your Spanx for squats, the remote for dumbbells, and your swim dress for a bedazzled bikini. 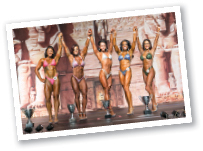 When She Decides to Get Wild: Wild Wings or gluten free pizza from Mellow Mushroom

The Sky’s the Limit: “Win a show like Junior USA’s and get my Pro-card”

No Greater Love Than: One-year-old daughter Harper, and husband, Matt Valentino, Executive Chef at The Pearl in Bluffton