The Business Woman Next Door 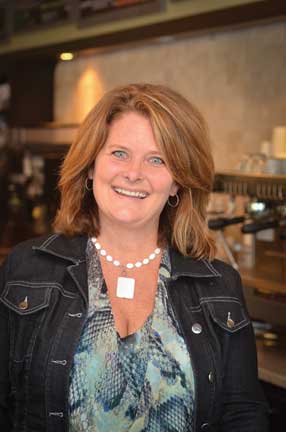 When Cheryl suggests I meet her at Watusi, her new restaurant, I'm thrilled. From the pictures, it looks like just the sort of place I love to discover; it's hip yet cozy, sophisticated yet inviting, and it has all the local ambiance the national restaurants attempt to emulate. And when I arrive a couple of days later, Watusi does not disappoint, nor does Cheryl herself. Immediately open and engaging, she suggests a seat on a corner leather couch and brings me a vanilla latte.

Originally from Paw Paw, Michigan, Cheryl stayed in Michigan through college at Ferris State University, ultimately graduating with a degree in social work. She knew, however, that she wanted to live somewhere warmer, and she had vacationed on Hilton Head for many years. The island, therefore, seemed like a logical destination. After relocating here, she worked as a youth coordinator at Island Rec. Center, and then later as the executive director at The Children's Center.

Then, 12 years ago, she decided to open a gift shop, and thus, The Pelican's Pouch was born. This was her first venture into the world of retail, so she started from scratch, teaching herself and learning from others everything she could about retail, including how to anticipate trends, how to source items, and how to make her shop unique.

When she opened The Pelican's Pouch, her oldest son Jack was eight-months-old. Her second son, Collin, was born a year after his brother, and then her daughter Emily was born two years later. Having a daughter proved to be inspiration for Cheryl and the primary impetus for starting her next store, Island Girl. Suddenly, after two boys, she was awash in the world of girls, and she capitalized on it. She describes her original vision as including "tutus and dress ups and fairies." Three years after the first Island Girl shop, she opened a second location.

Cheryl attributes her success in large part to the people that work for her. "I have wonderful people," she says, who treat her businesses "as if they were their own." She finds many of her lines by listening to her staff and those around her, who help her "figure out what works and find the next greatest thing." Many of her more successful lines, like TOMS and Jack Rogers, have stemmed from others' suggestions, and she acknowledges that much "credit goes to those that surround me." Additionally, she relies on "gut instinct," on "seeing something and saying, 'That's so cool.'" Often, she takes a gamble on what to stock her stores with for the upcoming season, and notes, "I've done pretty well going by the gut. I'm very blessed that it's all working."

Watusi, a departure from the retail world, is Cheryl's latest endeavor. Her friend, Kathy Bradford, is the general manager and has been involved in the development of the restaurant from the beginning. Cheryl initially envisioned it as a coffee and self-serve yogurt shop. Customer demand, however, led to the addition of breakfast and lunch fare as well. She laughs, pointing out, "It's my parents' fault. They taught me that I could succeed at anything."

Cheryl refers to her children numerous times throughout our conversation. All three attended Sea Pines Montessori Academy. A certified Montessori instructor and former teacher herself, she is a strong supporter of the Montessori system. She's also very committed to her role as parent, emphasizing that one of the biggest perks of being a business owner with competent, trustworthy managers is that she has the flexibility in her schedule that allows her to put her children before all else. "My first job is as a mother. My businesses facilitate that."

Always with an eye on the future, she mentions several ideas she has for expanding her businesses. "I love what I have," she explains and adds that she wants to continue doing what she does. Certainly, she is in her element, adeptly balancing family and business. In essence, she is the business woman next door.

On traveling: She enjoys the Florida Keys, and spends time in the summer with family in South Haven, Michigan, a town on Lake Michigan. "It's always a water activity," she says of her excursions.

On family: Cheryl is a middle child, having grown up with an older brother, Michael, who lives in Michigan, and a younger sister, Kerri, who lives on Hilton Head.

On decorating: Decorating Watusi and buying things for her retail shops have come easily to her, but Cheryl confesses that it's more difficult to choose items for herself. With a grin, she laments, "Why is it so hard to buy for my own house?"

On free time: She's not much for television, but Cheryl does like spending time on the computer. The mother of three sighs and says, "Silence is just sometimes so perfect."