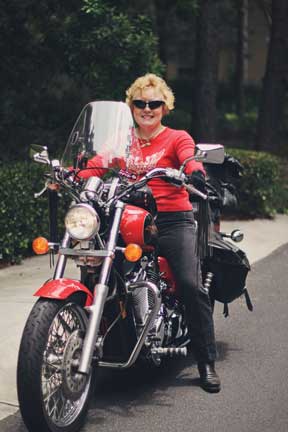 "The Motorcycle Lady", as my dad calls her, is my neighbor. We live in a calm, dog-walking community, where the only noise is the 5:00 a.m. bird chatter or the motorized drone of landscaping equipment. One day last fall, while retrieving my mail from the locked box marked 1922, I heard a thundering roar that caused me to whip around muttering, "What the hell?" Stunned by the halo of light that reflected off the gleaming chrome and Chanel Red Honda Shadow motorcycle as it zoomed to a stop in front of the community mailboxes, I slowly registered that the rider-wearing a Chanel Red helmet and a beautiful white, fringed leather jacket-was a woman. When she removed her helmet I realized she was a mature and lovely woman-with beautifully manicured Chanel Red fingernails. "Hello", she announced with a wide smile, "I'm Carolyn Keiser." Just what the neighborhood needed!

She says, "I love busting people's expectations. It's fun to add an element of shock and surprise to what people think they know about you. Clearly, this is one reason Carolyn rides motorcycles. She is a member of the "Women on Wheels Motorcycle Organization," a national club of female enthusiasts. She is working to create a chapter in South Carolina, where there are eight interested women. She wants to challenge the stereotype of the "biker babe." I ask her how many tattoos she has (revealing my own stereotyping). As of now she has none. She is trying to decide the best place for a Scottish thistle with a Celtic inscription. She probably confounds the expectations of her biker friends as much as she surprises her "Ladies that Lunch Bunch." That's fine with Carolyn. She's comfortable everywhere.

Carolyn is diminutive in size and gigantic in personality. Compressed into her small frame is enough energy and vitality to fuel a series of Red Bull commercials. In between her world travels, motorcycle trips, community volunteering and social life, Carolyn is still running a business. She says, "Even as a child I wanted to see and do everything. I hated to take naps because I might miss something."

She grew up in Toledo, Ohio, the oldest child of a Catholic family. She was the first person in her family to want to go to college. Her father wasn't excited by the idea, but Carolyn wouldn't back down. She says, "I stood up for so many things because I felt this was my life. I believed I could do anything I wanted." She switched from Catholic school to a public high school her senior year. She graduated fourth out of 400 students, and competed for and won a scholarship that paid for half of her college education. Her father relented and paid the rest. In 1973, she married at age 22, started a business and together, she and her husband went back to school for their master's in business administration (MBA). "I was very driven. I said I wanted enough financial security to allow me and my husband to finally not have to work so hard. But, I loved the energy of getting things done and seeing results, so I kept working."

In 2000 her marriage ended. There was no drama. They sat together at the computer and drafted their divorce agreement. No lawyers needed. Still, Carolyn was shocked. She had to re-evaluate her life. She had spent years being assertive, courageous, a leader, and now she felt helpless in making decisions. A friend guided her to a "Course in Miracles," which awakened a sense of the divine essence and the sustaining power of divine love. It affirmed her belief that "life is an adventure and I'm going to have fun!"

Buying the motorcycle was a symbol and a challenge to herself that she was determined to conquer any fear she had about her new life. She took state sponsored driving lessons-beginners, then advanced- where she mastered figure eights. She had some spills and just picked up the bike, which is heavier than her, and got back on. Since June 2006 she has ridden almost 20,000 miles, taking trips as far as Vermont and Northern Michigan. Off the bike she has traveled alone to Scotland, Ireland, England, New Zealand, Peru, Brazil, Italy and Spain. She says, "It's a choice. I'm the spirit that creates the energy to do these things. If there is something I want, I'll do it." That, dear readers, is gumption.

Up Close:
Wine aficionado: she has a wonderful collection in her custom cooler, which she shares generously
Wisdom: she says, "Pain is the great equalizer that brings us to zero so that we can learn to ask for help."
Helmet Hair: That was her biggest problem with being a "biker," so she bought a Stetson hat to cover it.
Wisdom II: "I learned early it takes too much work to buck the system. Just learn to use it to get what you want."