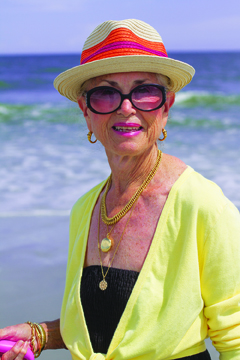 Who is the wisest person you know? Think about that person for a minute. What qualities do they have that make them wise? What life experiences have they lived through and how have they faced these experiences? After only a couple hours with Carolyn Austin, a four-foot-something firecracker, I knew that there was a lot of wisdom in that tiny body. As she told me her story, I noted the qualities and experiences that radiated wisdom:  Integrity in the face of ridicule; bravery in times of uncertainty; deep, unfailing faithfulness; an unrelenting spirit of independence; the maturity to listen and learn from others; the courage to fall deeply in love, and the ability to face the loss of that love with strength and optimism.

I met Carolyn at her beautiful, oceanfront beach houses on Hilton Head, which she has owned for nearly 35 years. "Don't mind the mess," she warned me ahead of time, "for the first time in my life I have nothing I have to do, nowhere I have to be, and no one to tell me I have to do something, so I don't worry myself over things." If there was a mess, I didn't notice because as I walked up the stairs, all I could see were wall-to-wall windows with a breathtaking panoramic view of the ocean. She described to me her daily routine: walking two to four miles on the beach twice a day with Kayla, her boxer, making an all-organic dinner for herself and Kayla every night, and sitting in her infrared sauna to detox harmful materials from her body. "All of the normal things that old people suffer from, I don't suffer from. I don't take any medication at all. I remember when I was little watching my grandmother drink a glass of water with baking soda every day. I didn't know why she did it, but now anytime I have a cough, I do the same thing and it clears it right up!"

Carolyn continued to reminisce about her childhood, growing up in the hills of West Virginia, where her strong foundation of family and financial security was built. Each Sunday she had family dinners at not just one, but both of her grandmothers' homes. "This gave me such a feeling of security and friendliness growing up. My grandfather also gave me an allowance each week - a quarter every Sunday - but I would only get it if I had saved half of my allowance from the week before. This taught me a lot about saving. To this day, I have never been in financial trouble, never borrowed money from anyone but a bank or Mortgage Company, never wrote a bad check, and never paid a cent of interest on a credit card. If I couldn't afford it, I just didn't buy it."

After graduating from Winthrop College, Carolyn spent several years experimenting to realize her passions and talents. She trained as a buyer at a grocery store, began grad school, but never finished, taught school in Charlotte, got her real estate license, got married, had three beautiful children, lost her husband at a young age, and in the late 70s landed on Hilton Head Island as a single mother, where she started a cleaning business and helped a friend with a vacation rental company. When she started her cleaning company, close friends implored why she wasn't in real estate. She told them she was taking time to get to know the Island, and gaining the trust of the local business owners.

Eventually Carolyn did gain control of a real estate company that was in trouble. "They all thought I would give up, but I never gave up. I slept on the sofa in my office most nights. I worked three years straight without a day off. They tried to bring all sort of charges against me, but they never could get them to stick. In the 90s I got the bank to loan me a million dollars; do you know how difficult it is to get the bank to loan a single woman a million dollars? It means that person is really trusted. A woman I worked with thought I was laundering money, so one day I was at work and two IRS agents burst through my door. She was holding a clipboard, and he was holding a gun. They packed up my entire office and took it to Charleston. I asked them, 'How long do you think this will take? I have a dinner date tonight and I need to get my hair done!'" Carolyn laughed. "They hated that they didn't shake me, but I knew I hadn't done anything wrong. Eight years later, after they had finished their investigations, they called me to Charleston and told me they hadn't found anything on me. This cost me millions of dollars, and my reputation. To this day, I think I may be one of the only people who has ever gotten a letter of apology from the IRS."

In 1996 Carolyn unexpectedly reconnected with her boyfriend from college, Bobby Austin, a lawyer in Florida. The two instantly fell back in love and were married within two months. "This was the most wonderful time of my life; I don't think we ever had an argument. I learned more from that man in the years I was married to him than all my other years combined. If you want to be wise, align yourself with the smartest people you know. You can't help but soak in their knowledge. I could ask him anything, and he would know it."

Bobby spent 16 wonderful years with Carolyn, helping her through the tragic loss of her son, Robert, before he passed away 16 months ago from a stress-induced heart attack. Through all the trials and tragedies Carolyn has lived through, what is most evident now is her unbreakable spirit and her never-ending faith. "Don't you know God loves me! I'm just a pawn and God moves me around. I try to always stay optimistic. I miss Bobby terribly, but I hope to inspire someone who gets down, and remind them that tomorrow is always another day. Work as long as it takes you to get the job done. Everyone has it in them, if they just put their heart and soul into what they're doing."

Up Close:
Children: Katherine Gasque, Elizabeth Gist and Robert Jacob
Typical dinners for her and Kayla: Chicken or pot roast, brown rice and a vegetable for Kayla; a big salad with berries and nuts with olive oil, or salmon and broccoli for Carolyn, all organic.
The unexpected: She nearly always carries a gun with her.
Old-fashioned wisdom to live by, straight from Mama: A penny earned is a penny saved; You're known by the company you keep; Don't ever tell a lie, because you'll have to come up with another lie to cover that one; Early to bed, early to rise, makes a man healthy, wealthy and wise; Be up and busy by 6 a.m.