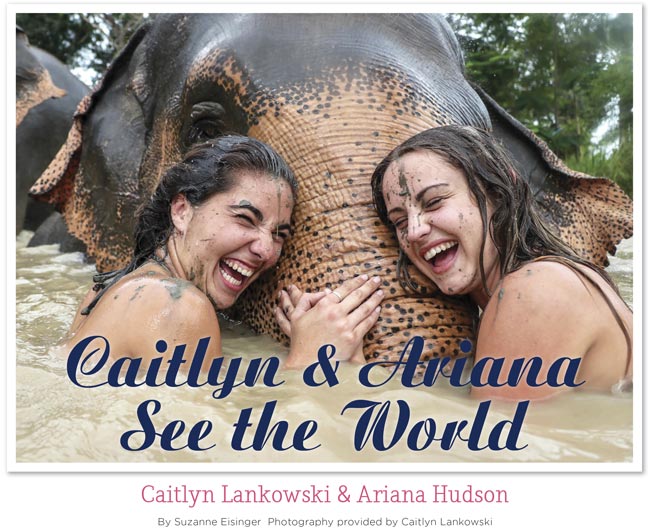 They have ridden the Sahara on camelback. Swam with elephants in Thailand. Scaled icebergs in Iceland and greeted the sunrise in Bali. They have visited ancient temples and camped out under the desert stars. Photographs of their adventures are awash in color—brilliant Moroccan blues, dazzling Grecian whites, vivid rainforest greens.  And scattered among the scenes are the photographers themselves—two young women, their faces brimming with excitement and wonder.

In August, Caitlyn Lankowski and Ariana Hudson embarked on a nine-month journey that has taken them throughout Europe, Asia, Africa, and South America. The list of countries reads like a geography lesson, and the young women take turns reciting the names, laughing as they challenge each other to remember them all. I lose count, but they don’t. By the time they return in May, they will have visited 26 countries in all.

It all started two years ago, when Caitlyn, a Hilton Head native and Clemson graduate, joined Teach for America (TFA), a service organization providing quality teaching for underserved public schools. Assigned to a teaching post in New Orleans, Caitlyn met Ariana, a recent Southern Methodist University graduate and native of Magnolia, Texas, who was also teaching for TFA.

During school vacations, the pair had the chance to travel together, including a two-week trip to Barcelona, London, and Scotland. For Caitlyn, who had never been to Europe, this was an eye-opening experience. It was then the duo began toying with the idea of an extended adventure. “We were always joking about it, looking up flights for fun,” Caitlyn remembers. “Eventually we just said well, why don’t we quit our jobs and do this?”

The young women began researching and budgeting for the trip. Their itinerary was planned yet flexible, and included the countries they had dreamed of visiting for years, while keeping a close eye on affordability. To keep costs down, at each destination, they stay at youth hostels. “Because we’re so limited with money,” Caitlyn explains, “we have to get creative. We ask the (hostel) staff questions, which leads to the inevitable, ‘Oh, you’re new here?  Come join us for dinner.’” This personal touch lends a genuine feel to their travels.

While most of their destinations involve soaking up the local culture, some have involved giving back. In India, Caitlyn and Ariana worked for a nonprofit organization, and currently they are working at an orphanage in Kampala, Uganda, which is where I caught up with them via Facetime. Here, they stay in the volunteer house, a hut-like dwelling they share with 15 other volunteers, who assist with medical and HIV care, childcare, and education, among other things. After a full day working with children, they relax with peers in the volunteer house, sharing meals, playing games, and getting to know each other.

For Caitlyn and Ariana, the personal connections they’ve made during this trip have left lasting impressions. “We’ve met some incredible people from all over the world,” said Caitlyn, admitting that it’s the people more than the places that she’ll miss most.

Ariana is struck by the sheer range of global experiences and languages their fellow travelers possess: “I haven’t encountered a single mono-lingual person since leaving (the U.S.),” she said. “Everyone speaks at least two languages. It’s super humbling.”

After Uganda, the pair will visit South Africa and then South America before returning to the U.S. and Teach for America in May. Ariana plans to teach eighth grade English in Boston, while Caitlyn hopes to teach full time while pursuing a degree in educational counseling.

No doubt, their families will be waiting impatiently for their arrival. “They are really excited for us to come home,” Caitlyn said. “But they also love (that we went). I think our families are living through us. They love seeing photos and Facetiming with us. We’re getting to see things they’ve never seen.”
By any standards, this has been an adventure of a lifetime for Caitlyn and Ariana, one that will shape their perceptions of the world and their place in it for the rest of their lives. One thing is for certain—this won’t be their last adventure. The world is a very big place and they have only just begun to explore it!