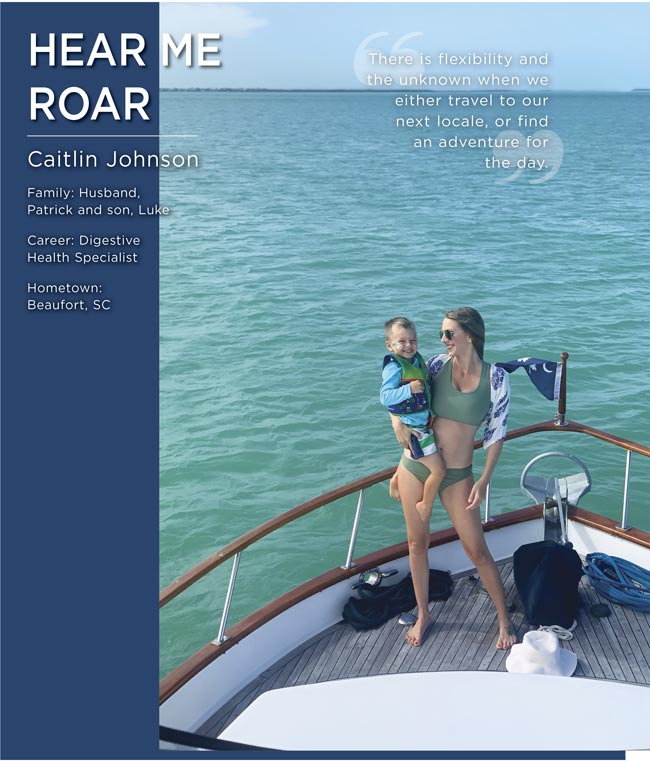 In January of this year you set off on a six-month cabin cruiser sea journey with your husband, Patrick, and your 3-year-old son, Luke. Where are you headed and why?
We are headed south to warmer weather! Instead of waiting for the summer temps, we are going to chase them down. It was only once we got underway that we decided to travel to the Keys first, then the Bahamas before we head back north.

What made you decide to document your adventure via Johnson’s Jaunt blog?
Two reasons really: I want to have a record of our trip as I experience it, and I want friends and family to follow along. It’s easier than having to update dozens of people. Oh, and my mom doesn’t have social media, so she needed a way to follow us.

The month of July 2015 changed the trajectory of your life. Tell us about it.
It sure did. Our son, Luke was born that month; however, two weeks prior my father-in-law and brother-in-law were killed in a plane crash. My brother-in-law was the pilot, and an F16 broadsided them on takeoff. Officially, it was found to be negligence on the air traffic controller. I think we were both in still in shock when Luke was born, and we just let his infancy consume us. Then in October of that year, not even three months later, my older brother died by suicide. I couldn’t ignore the grief and push it aside. When my dad called me at 1 A.M., I just screamed for a while. It was unlike a sound I’ve ever made before and one I didn’t even recognize as myself. That’s when my healing began. It began when I let the grief and pain wash over, through, and out of me.

You created and now manage two public causes due to these personal tragedies … what made you decide to turn them into triumphs and how has doing so benefited you, your family, the community?
I manage a scholarship fund in honor of my in-laws. Our friends from Beaufort Realty Consultants helped us start the scholarship, and we have awarded several student athletes from Beaufort High scholarships over the last three years. My father-in-law, Michael was a retired educator and my brother-in-law Joe was a minor league baseball player. We combined their passions into one of ours. They meant so much to so many, and this is a way for them to continue to contribute to our world. Missing Chris: A Suicide Prevention and Awareness page was born from my need to speak my truth. I have published an article before about how different the deaths were for me in terms of support and response. It was crystal clear that death by suicide still had and has a stigma. That page has morphed into a place of support, strategies, and positivity. It was my vehicle for personal research and healing, but I’ve heard that it has helped some in hard times...just to know I am there and not judging.

Paint us a picture of your boat and a typical day in your life at sea.
As you probably guessed, it’s never the same! And that’s why I pushed to do it. I felt myself getting stagnant after experiencing so much growth for the past few years, and I’m still interested in inviting challenges. So while there is a bit of a routine where we do all the normal morning things (shower, brush teeth, coffee, tidying), there is flexibility and the unknown when we either travel to our next locale, or find an adventure for the day. Ahhhh, there are so many details I could go into but just know it’s all on my blog. We named the boat “Adventure” for a reason!

What are the craziest challenges you have faced on your journey thus far?
The craziest thing is definitely the amount of people we run into and have connections to. The world is so small. And thinking I could keep sand out of the bed. That is crazy.

What is your ultimate destination or is there one?
Key West where we eloped!

What’s the one thing you had to leave behind that you miss most?
We lived on the boat in Beaufort for over a week before we left. So we forgot a potato peeler and undergarments (I have no excuse). Other than almost forgetting those things, I left behind my cat. My mom is cat sitting, and they will probably both need therapy as a result. Cleo the cat is quite high-maintenance.

What’s the most important thing you’ve discovered about yourself since you’ve been at sea?
I am a horrible deckhand. I left a fender down all day today, and that’s my main job as crew. It’s okay; only 2,093 boats saw our boat today. Whoops! Other than that, I have learned I can practice what I preach about being present and looking at things through a positive lens.

What are you roaring about?
I want to roar about suicide prevention and mental health stigma. Everything I do now as a mom, wife, friend, daughter, educator and digestive health specialist stems from my brother’s suicide. I became more keenly aware of just how much people are struggling through my own tragic circumstances. I roar as an advocate for leaning into your emotions, not judging them, and having faith that there’s a lesson in it all. At the same time, I roar as a cheerleader encouraging you to actively seek out tools to heal. I roar about positivity, presence, manifestation, and mantras on my social media pages. I roar about tools I didn’t have when dealing with someone who is suicidal. If you are worried, ask your person directly, “Are you thinking of hurting yourself or taking your own life?” Most loudly, I want to roar about checking on each other—send the random text to say hi, smile when you pass someone on the street, tag someone you thought of on that Facebook post. Grief is what you haven’t and gratitude is what you have; they seem so dissimilar, but they have worked together in me and for me to change my life and give it purpose.