68 Years of Lowcountry Lore and Love 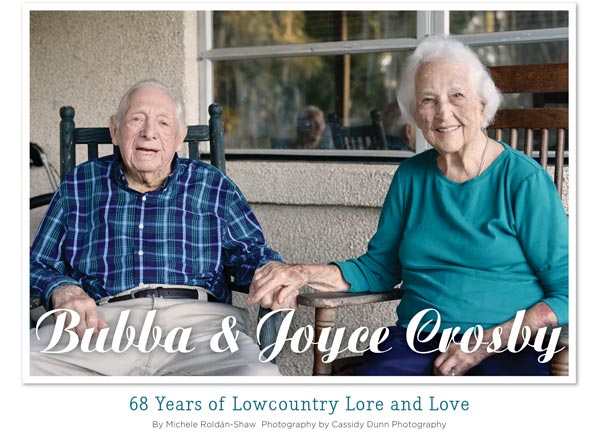 It’s been nearly a century since Bubba Crosby came into this world. He was six years old when the highway from Bluffton to Hardeeville went in, and his entertainment was watching them build it with mules and horses. He now lives in a house about a mile from where he grew up that he and Joyce Crosby, his wife of 68 years, constructed piecemeal. Talking with them is a window into a world that has mostly disappeared.

Bubba’s mom’s side of the family was from Pinckney Colony. His granddaddy had 21 children and was married four times to two sets of sisters, so when the family got together for 4th of July at Pinckney Point, there were 300 people scattered under the big oaks. Bubba’s daddy raised cattle and hogs, but during the lean years of Prohibition he did a brisk trade in “red liquor” from Nassau, which was hidden in barrels of Irish potatoes and brought up the New River to the old train depot where it could be shipped up North. Rumor held it went to the Kennedys who made all the money off it.

Bubba’s daddy was a bootlegger, but Joyce’s daddy was a revenuer—which did nothing to stop their budding romance. She was 18 when her cousin set them up on a blind date to the movies. Bubba was okay, Joyce recalled, but what finally convinced her to marry him was simply that he wouldn’t go away. A tomboy who loved horses and the outdoors, Joyce had rescued a goat from the barbecue, and it became her best friend until she was 16, waiting every day for her to come home on the school bus. Bubba’s lifestyle of fishing, hunting and farming would suit her.

After serving in World War II, Bubba farmed Hilton Head Plantation before all the houses, and rented fields from Beaufort to Bellinger Hill. He grew vegetables, corn and soybeans, plus daffodils to bring a profit when nothing else was in season. The employment he gave locals at a time when there was little else meant that many of them bought their first pairs of shoes after working his fields. When farming went bad in the ’80s, Bubba dug up wax myrtles to sell to nurseries, then went into sandblasting for 25 years. But he never fully gave up farming. Tomatoes are his signature crop, and even today he sells them off his front porch along Highway 46 across from the New River Linear Trail, something he has kept up for 30 years.

Long before the big housing developments, he knew these woods like the back of his hand. He brought home venison to feed his family, or fished the New River with strings of catch dangling from his belt. He had to be careful because if they touched the water, snakes would try to eat them. Bubba stayed busy and never drank or smoked, except one time when he fell in the river and they gave him something to warm up on the inside.

Joyce roamed the woods, too, on a horse Bubba bought her that he jokingly credits with the success of their marriage. She was responsible for making big midday meals for his workers, mostly “spoon food” like venison with brown gravy and rice. She and Bubba could go casting for shrimp in the May or the Colleton and fill their freezer for the whole year. Joyce had gone to business college before working with a Traveler’s Insurance Company, but after the birth of their son, they decided she would stay home to care for the family. Every three years they’d have another child, and today the 53-acre farm is divided between one son and three daughters, all but one of whom live on property. (The “furthest” daughter is in Bluffton.) The Crosby family has grown to include nine grandchildren and five great-grandchildren.

“We’ve always been happy,” Bubba says from his easy chair by the fire. “We raised a good family, and they’re all still right around, so I guess we did something right. But when we got married we didn’t know anything.”

From her seat next to him on the couch, Joyce adds that the secret to their longevity is “being happy, working hard, and cooking every day.”

So there you have it: Lore of life in the Lowcountry filled with longevity, legacy, and most of all, love.