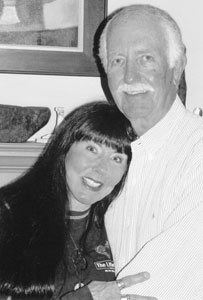 When I first saw her, I thought she was dynamite!" grinned fighter pilot, Chuck Helton, describing his first glimpse of Bobbi Richards at the Officer's Club in Bitburg, Germany. It was war time. The Vietnam conflict was still raging in 1970, and time was a precious commodity. Another function at the Officer's Club in February offered Chuck the chance to ask the long-haired "hippie" he had admired to dance. The dark-haired beauty politely refused, but later accepted his second offer for a cocktail and conversation. "I wrote home saying I had met this ol' major, (not sure why I said THAT!), but he was very nice!" laughed Bobbi, giving Chuck another adoring glance. Each break he had from Vietnam missions, the handsome pilot asked Bobbi out for a pizza date. Bobbi confesses when he ordered one large pizza, "I wondered what he was going to eat, 'cause that's what I always ordered! I may not have thought he was my type initially, but we enjoyed each other." reflected Bobbi, an education graduate from Ohio University, working with Department of Defense in Germany when she met Chuck. "He was flying missions, so we corresponded a lot more than we dated. I was thinking about requesting a transfer to Japan, or returning back to the States and wrote to Chuck about it. When his squadron returned to base, he sat me down in his lap, looked seriously at me and asked, 'Do you think you could be a golf widow?' I thought no one can match this guy, and I want to spend the rest of my life with him!"

Peace met passion and Bobbi and Chuck jetted off to Ohio that July. "I had two weeks to plan our wedding," said Bobbi. "We were married in the woods at my sister's home six months after we met! When the minister said 'You may now kiss your wife,' I let out a primal scream the neighbors heard!" she continued. "Our honeymoon was different...with his family in Mississippi!"

"We returned to Europe," added Chuck, "so our honeymoon was really there." Smooth and cool, the Mississippi State graduate leaned back in his chair, gazing at his wife of 38 years with a smile. "She made me feel alive. She was so involved with lots of activities, and is the most vivacious person I've ever met!"

Many states claimed the romantic couple's presence including Nevada's Nellis Air Force Base, prestigious "Home of the Fighter Pilot." While Chuck rose through the military ranks, Bobbi pursued a longtime dream of writing plays (many of which she directed for young children), poetry and short stories. Some of her works were recognized by an organization to which she belonged, the National League of American Pen Women, Inc.
Their chemistry for each other matched their passions: flying and golf, which the Wing Commander began at age 24 in the Air Force, and fitness, writing, and animal rights for Bobbi. She has been a vegetarian for years and worked tirelessly for many national animal organizations.

In 1984 Colonel Charles Helton retired after 26 years of protecting his country. The couple bought and outfitted an RV to begin a quieter phase of traveling to the places they chose, along with their five dogs! Chuck was restless without a job and responded to a call from a Los Angeles company. With all his tactical experience, Chuck was snatched up in 1984 by the aerospace division of Rockwell International and offered a position he held in their Ohio office until his second retirement in 1998. "Well, it was sure different and certainly less exciting!" reflected Chuck, who flew multiple missions 100 feet off the ground at 500 miles per hour!

After several visits to Hilton Head Island, the couple bought a lot in 1995 and moved here in 1999. Bobbi immediately picked up her passion for animals. She joined The Humane Association Board, coordinated the Sally Hunter capital improvement program and became president of the organization in 2003.She assisted with The Litter Box, opened in 2001 to fund the Humane Association's feral cat program, and became its manager in 2005. The versatile thrift shop, where Bobbi spends six days a week, occupies 10,000 square feet and offers every product imaginable. "Our phenomenal success is rooted in our customer service," declared Bobbi proudly."All proceeds go toward caring for over 1,000 dogs and cats rescued every year by our Humane Society until they are placed in loving homes."

Joint passions or individual, Chuck and Bobbi exhibit a deep love, respect and admiration for one another. Bobbi happily pursues her animal passion (at one point, five dogs and seven cats resided with them). Although the number has decreased to four shelter dogs and one cat, Chuck says, "Since we are not traveling anymore, four or five are as easy as one-and it's her life!" Whenever engineering assistance is required, Chuck can be spotted at the Old Wildhorse Rd. Litter Box location as well. Otherwise, the former Indigo Run club champion is working on his current passion, perfecting the flight of a little white ball, a much smaller object than an F-16.

The self-confident qualities Chuck and Bobbi encompassed in their individual careers blended perfectly into their successful union of 38 years.Both possess a peaceful passion for each other, the same team efforts their chosen hobbies demand, and most importantly, "We share a deep trust between us. We talk everything over and never fight," smiled Bobbi. "Well, never?" The Wing Commander questioned as he zoomed in to plant a firm kiss on his wife's cheek.