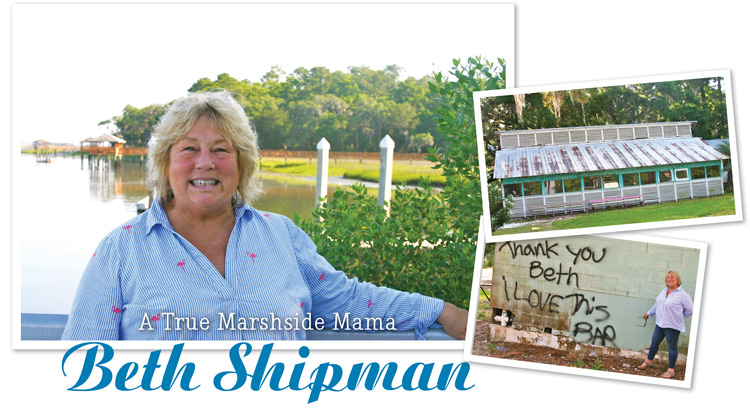 Beth Shipman is an icon in the Lowcountry. She is an easy going, fun and relaxed lady, who did an extraordinary thing to change Daufuskie Island, and the people she impacted will forever have a special place for her in their hearts. I got the chance to head over to Daufuskie, where Beth took me on a grand tour of the island via golf cart.

Beth was raised on Hilton Head Island in Sea Pines. She was a lively child, and loved where she lived—she new it was special. After graduating from the College of Charleston, she landed a job at the historic Melrose Plantation, and officially moved to Daufuskie in 1990 to settle down with her then husband Brian Shipman, a Haig Point boat captain.

Beth is always having fun. I could tell she fully enjoys life by her beautiful smile draped across her face the whole time we talked. The longer Beth lived on Daufuskie, the closer she grew to the locals, ultimately becoming one herself. One night, she and her two best girlfriends were having fun partying, and decided to go swimming in the river on the backside of Daufuskie. It was such a great time; from then on they referenced each other as “the marshside mamas.” They had no clue how much of an impact this would have.

In 1997, Beth had an idea, got up the courage, and started a restaurant and bar above Daufuskie’s Freeport Marina and General Store. It was called no other than Marshside Mamas. Soon after, she leased land with a building on it right near the county’s public dock, thus beginning the start of a booming era. She was excited because no one ever made it more than a year in this particular building, but Beth was determined to make it her own, and that’s exactly what she did.

Marshside Mamas became one of the most hopping destinations in the Lowcountry, where locals went to hangout and tourists would feel welcomed, as well. People didn’t flock to the restaurant just for the food, dancing and drinks; people came to see Beth. “It was more than just a restaurant, it was a community,” Beth remembered.  Everyone would come to have one of her famous bowls of gumbo, or to see what new dish she was cooking up. People described it as a “home away from home.” What made it so welcoming was Beth’s  unique touch to a beach bar, she put her heart and soul into her business and it showed.

In June 2011, Travel + Leisure Magazine named Marshside Mamas one of the 10 best beach bars in the United States. They said, “Owner Beth Shipman cooks up mouthwatering gumbo, shrimp and grits, and there’s always the freshest fish because fishermen pull up to the dock to drop off their catch of the day. They rock out to live bands on weekends and follow the lead of owner Beth, who’s known to yell out, ‘No whining, just dance.’”

To add a little more fun, one birthday, Beth got an unusual and unexpected present from her Brian—a gift named Ned. Ned was a potbelly pig who quickly became famous as the official mascot of Marshside Mamas. He brought the ambiance, while Beth was cooking-it-up in the kitchen; a true dynamic duo. “He would always sneak out of his pin to come greet everyone, he was his own socialite, she said.”

When Beth recently became aware that Beaufort County, who owns the buildings and the land, no longer wanted to be responsible for maintenance, she decided with great sadness to close the restaurant. January 1, 2018, ended Marshside Mamas Café legend, which served up fun, drinking, eating, music, friendship, community and a whole lot of memories for 21 years. This was such a disheartening step in life for Beth. “What do you do when something comes to an end? It’s real sad but we had a wonderful time, so much fun,” she exclaimed. “I’m ready for my next adventure. There’s a whole lot of things we ain’t never done, but we ain’t never had too much fun,” she said laughing through tear-filled eyes.

Our last stop on the tour was to the Marshside Mamas building, which was boarded up. It was poignant, not only for Beth, but for me. It was bitter to see one of the coolest dives in the Lowcountry not grooving to its usual beat. Looking at the scene brought back memories for the both of us. I looked over at Beth catching the twinkle of love reflecting in hers eyes. She truly loved her bar, and it loved her back. On one of the walls of the outside the run down public restrooms, it simply states in black spray paint, “Thanks Beth, I Love this Bar.”