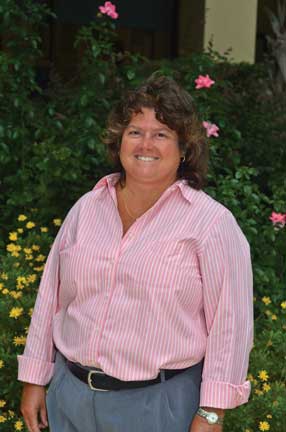 Beth Gasiorowski is looking at her calendar that will navigate her through a typical day at Hilton Head Hospital. There's the emergency management team meeting, followed by the environmental care meeting, then she's off to a security meeting. It's all in a day's work for the hospital's Director of Risk Management/Patient Safety Officer. And it's all in a day of working indoors for someone who describes herself as "an outdoors person."

"I guarantee you her foot is going constantly when she's sitting at those meetings," her friend Ginny said. "She's one of those foot tappers, and the leg is going under the table all the time."

Beth moved to Hilton Head Island four years ago, in her early 40s, after deciding to take a hiatus from the working world. She had bought a home in Hilton Head Plantation a year earlier, after vacationing here at least a dozen times. Beth also had a group of friends here whom she had known for years, giving her a feeling of comfort in relocating.

"I thought it was great when she moved here," said Ginny Stupar, who has known Beth since childhood. "It was likehaving our daughter here. It was like having a kid who came home."

Beth's big leap from city life to island living came after a successful career as a litigation lawyer at a large firm in Baltimore. She said her interest in pursuing a law career was ignited as an undergraduate student at Loyola University in Baltimore when she interned for a female judge. Pursuing a career that required high skills was always part of Beth's plan. "It was never if I was going to go to college, it was where was I going to go to college," said Beth, whose late father was a college professor and whose mother was a college librarian.

However, frustration set in when Beth was working around the clock in Baltimore, but not necessarily in the courtroom. "I loved trying cases and being in the courtroom, and I was good at trying cases," said Beth, who specialized in medical malpractice defense. "But nobody tries cases anymore because they are all afraid of the verdict. So they settle, and you spend way too much time sitting in the office doing paperwork."

Her game plan was to find a job as an attorney in Savannah, since practicing law was what she knew best, having worked a combined 16 years between the Maryland Attorney General's office and at a private firm. She said she had enough money to support herself for a year without working, but it only took three months before Beth landed a job and a new career at the hospital.

Some of Beth's duties include minimizing the hospital's risks by maximizing the safety of the patients and the employees. Her law expertise comes in handy when she offers her perspective on risk and safety issues, although she is not an attorney for the hospital. "Never in a million years did I think I'd be doing something like this," Beth said. "But it's fun, because what I like is that every day is different. I'm never bored."

However, Beth said the three-month bridge between moving here and jumping back into the work force was the most fun she's ever had. "I'd play golf every other day, I'd go to the beach every other day. I'd take my dog running, exploring the island. I did something different every day," she said.
Her 13-year-old dog was a Dalmatian mutt that Beth rescued from a dumpster when he was eight-weeks-old. Aptly named "Mulligan," Beth's dog died last month. She said she'll think about getting a new dog after the holidays. Until then, she'll adjust to enjoying the great outdoors-when she's not at work-without her best buddy.

Background: Raised in Wheeling, West Virginia. Moved from Baltimore to Hilton Head Island in May 2008.

Interests: Golf, kayaking, biking and anything outdoors.
Favorite activity in the fall: Watching the Baltimore Ravens. (She's a season-ticket holder).