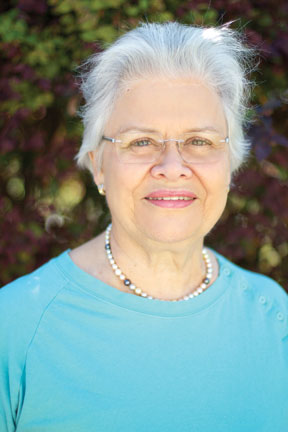 As a young, 20-something-out of school, unmarried, independent, inquisitive and restless-Beryl  LaMotte, lived at home with her family in Johannesburg, the largest city in South Africa. Having already lived in Zululand as a secretary for a sugar mill in Mtubatuba and traveled in Europe, she announced to her father that she wanted to go to the United States. Her father-knowing little of the USA-responded, "What for? America's just full of cowboys and plastic."

Beryl-who exemplifies her belief that "intellectual curiosity is a life force"-was undeterred. I  asked, "Why America?" She replies with profound simplicity. "I read the Constitution. I felt apartheid in my country was inhuman. The problem is the government didn't educate everybody. I knew the country would explode within 25 years. After the U.S. Constitution, I read the Gettysburg Address. I could feel America was a young country with energy and a good attitude."

Her entry into the U.S. was deterred by the existing U.S. quota system for immigrants and a four-year detour to Canada, working as an assistant to a cardiovascular and thoracic surgeon, before she was able to "come in through the back door."  American doctors, witnessing her competence while touring Canadian medical facilities, invited her to come and work in New York City. One of his "connected" patients was a Congressman from Alabama, who was able to expedite her papers and obtain the coveted "Green Card," which made her legal.

Fate led her to a new position at The Roosevelt Hospital in NYC.  Beryl, even then an unstoppable force, describes herself as "always in a hurry."  Rushing a closing elevator door and strong-arming it to open was typical, but once, when she stepped inside, a voice from the back asserted, "Hell of a way to break your arm." To which she cheekily retorted, "I'm sure there's an orthopedic surgeon somewhere in here." A week later an unknown man winked at her, which she found rude and "fresh." Amused, he acknowledged himself as the man who made the comment on the elevator. To New Yorkers, he was known as the Chief of Trauma Surgery and Chief of Orthopedic Surgery at Roosevelt Hospital, and more famously, as the physician to the New York Metz baseball team. Beryl had no idea. One week after that Peter LaMotte, known to Hilton Headers as the founder of the Hilton Head Hospital, asked Beryl to be his wife. She said yes.

In the fall of 1970, travelling by boat down the Intercoastal on their way to Florida, Peter and Beryl (7-months pregnant) stopped at Jenkins Dock (near present day Windmill Harbor.) Seeing very little of interest and knowing no one, they spotted the Lighthouse in the distance and headed down there. Beryl remembers the first hole of the golf course and meeting dock master Woody Collins. They were invited to a party-in those days a party on the island meant everybody came. Charles Fraser and others convinced Peter that for Hilton Head to become a thriving community, it needed a first class health care facility. During that visit the LaMottes bought property. Two years later they moved to Hilton Head permanently. There were 3,000 residents and two doctors working at a small clinic on Pope Avenue. In 1975, against nearly insuperable odds, that many claim only Peter LaMotte could have overcome, a 40-bed hospital opened.

I am sitting across from Beryl in her home in Moss Creek. I know from numerous sources that Beryl is as indefatigable a contributor to this community as her husband was. She opens the door, welcoming and at ease. I am comforted by how she looks; like a woman who has fully inhabited herself from childhood, through girlhood and womanhood into maturity. She is wearing a monogramed red apron, a light purple button down shirt and dark pants. There is nothing frivolous or vain about this woman. Her hazel green eyes hold humor and wisdom. I didn't realize until we had talked for quite a while, that Peter died five years ago.

I marvel (inwardly) that life or fate or whatever mystery you call it, drew two equally forceful, fearless, adventuresome people to a collision point in a NYC hospital elevator where they met, then married and together, with no prior plan, changed the future of a small coastal island, where they just happened to stop. It incorporates romance and purpose and belongingness, and yet it is something more. I am left understanding only that Beryl and Peter have had a big life.

Her presence fills me with a sense of what mature womanhood can be: solidity, durability, power earned through being, rather than striving. She embodies a resoluteness that demands justice and practices compassion. She is someone who understands loss, yet remains both steely strong and loving. I witness her sincerity when she talks of helping even "one child" struggling with drug and alcohol addiction; her crusty and humorous delight in talking about her five children, her smile when she talks about taking her grandson, Carlos, for "a crazy, crabby fish" at Crazy Crab restaurant; her tears when she talks of visiting the Children's Memorial at Yad Vashem on her trip to Israel.

Beryl LaMotte has been in the Lowcountry for 42 years.  How lucky are we that she decided, as a headstrong young woman, to come out of Africa and bring her feisty, indomitable spirit to our shores.

Home Entertainment: Beryl easily handled 45 guests for drop-in dinners over the years. She loves to cook.

"Trying to Save the World":  Beryl's rueful explanation why she no longer does her ceramic art work.

Good Works: Honestly, the list is too long for this article.