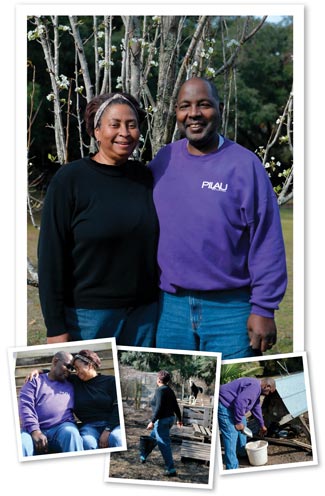 Life has a way of coming full circle sometimes. We think we’re headed one way and end up going another—maybe even right back to where we started. That’s exactly what happened to Tony Jones who grew up in the Beaufort area.
When Tony was 10 years old, his parents purchased a 12.4 acre farm on St. Helena Island from a great aunt who acquired the land during the Reconstruction Era after the Civil War. His parents, Robert and Clara, farmed a small part of the land for the family.

Tony went off to college at South Carolina State in Orangeburg, where he met his future wife, Belinda. He wanted a military career, and through the ROTC program, once he graduated, he was commissioned as a 2nd Lieutenant in the United States Army. Tony and Belinda spent the next 20 years in duty stationed in Germany, Belgium and the United States. Three of their four children were born in Europe.

Belinda and Tony both grew up in nature with gardens, fruit trees and small animals. “As a child I planted and harvested fruits like pears, muscadines, figs and pecans,” Belinda said. “And I wanted our kids to experience that, so we always had a garden. Tony bought a tiller, and we moved it with us everywhere we went and made a garden, no matter how small the plot. The kids were always so proud to show off their tomatoes and squash.”

Tony had no intention to return to Beaufort after retirement, but as his official retirement in 2002 grew closer, a letter from his parents resulted in a surprising change of plans. They gave Tony and Belinda their homestead—all 12.4 acres due to his father’s declining health. They wanted to be sure the land stayed in the family.

“When we got here, we built our house and started out planting for ourselves. We got our kids involved in the 4H Program through Clemson Extension,” Belinda said. The first year they had to grow tomatoes and watermelons to enter in contests for the sweetest watermelon, the ugliest tomato, the best tomato, etc. So Belinda and Tony created a separate plot for the kids and their projects.
“Later they raised chickens, hogs and goats, and for three years in a row they won blue ribbons at the SC State Fair,” Belinda explained. “As part of their project raising chickens, they had to sell eggs, mostly to friends and family. Word of mouth spread and they did really well.” Their daughter, Sarah, decided to take her egg-selling to the next level and sell off-site in stores. Sarah learned that she needed a license, her own label, and that she could only use new cartons. Even with all the requirements, she built a successful business and diligently worked it for several years. At age 16, Sarah announced she was retiring from the egg biz to focus more on healthy living projects. Thus, Tony and Belinda took up egg-selling.

Six years ago, Tony and Belinda decided to turn their hobby farm into something bigger and better. They took trainings on how to convert a homestead into a commercial farm. Two years later they formed Morning Glory Homestead Farm, LLC to sell produce and eggs, and process hogs, chickens and turkeys.

Then Covid struck and farmers’ markets closed. But, for them, Covid equaled creativity. They opened an online store so they could continue to serve their customers safely. Then, according to Tony, Belinda started getting wild ideas to grow the business. They are now beekeepers and much more.

They are part of an international program called Hip Camp, which is like AirBnB for campers, with sites that range from primitive camping to glamping. Tony and Belinda have two sites on their property. In addition, because most kids today don’t have the opportunity to experience country life, Tony and Belinda offer working tours of the farm to classrooms throughout the county. Farm and Heritage tours are also available to the public.

Agri-tourism highlighting their Gullah heritage is their newest endeavor. They offer campfire dinners with Gullah songs, stories, food and distinguished speakers from across the country.

The land called them home, and now the reason is clear—to provide fresh, organic food for the body, and to bring their heritage alive to feed the soul.

Up Close:
Generations: Belinda only recently learned of her Gullah heritage. Growing up in Orangeburg, her great, great grandmother never spoke Gullah. Through a deep dive into her family’s history, Belinda learned more about her. She lived on Weston Plantation in Charleston, and after emancipation, she married a minister.

Hush Up: As a child Tony was chastised for speaking Gullah because it was not popular, and his parents wanted their children immersed into mainstream culture.

No Way: Tony was 10 or 11 years old when he visited Parris Island on a school field trip. He witnessed a drill sergeant yelling and insulting a recruit and decided on the spot that he never wanted to be a Marine.

Attend the Next Gullah Campfire Supper with stories and songs at Morning Glory Homestead Farm on Saturday, March 26 from 5:30-8:30 p.m. Celebrating Women’s History Month, this event will be a part of the farm’s continuing focus on the Civil Rights Movement in SC. Guest speakers are sisters Dr. Millicent Brown and Minerva King from Charleston.

Dr. Brown is a lifelong community advocate and spokesperson for economic, social and educational improvements in exploited neighborhoods and communities of color throughout the South, the Nation, and the world. Ms. King, a former social worker and counselor, worked as a librarian, library manager, library media specialist and adjunct professor for a total of 35 years. Since 1992 she has devoted herself to the art of storytelling. The sisters grew up during the 1950s-‘60s in a family deeply involved in the Civil Rights Movement and were original plaintiffs in the local school desegregation case.

There’ll Be Food, Too! Marvin Ross, founder of Peculiar Pig Farm in Summerville, SC, appeared in the Netflix original documentary “High on the Hog” based on the book by the same name by food historian and author Jessica B. Harris. He will be the chef and roast a hog for this event.