A Treasure Trove of Talent 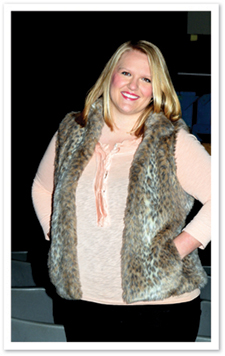 Meet Anna Schaffer, actress, dynamo and community servant. Anna grew up in Fuquay-Verina, a tiny tobacco-farming town in North Carolina. She is the only child of parents who have always supported her in following her dreams. Anna started piano lessons at age 5, performed her first solo at church at age 7, and was on stage playing character roles by age 9. Throughout high school, she studied and performed with the North Carolina Theatre Conservatory Production Company. Upon graduation in 2007, Anna headed off to Elon University to study performance. Midway through her sophomore year, she felt her creativity becoming more and more stifled as a result of the translation of her performances into grades by the professors. “There was no longer a personal connection. I wasn’t in love with the process,” she said. After some long and hard considerations, she left the department and switched majors to history and political science. She didn’t look at a piece of music for the next couple years. It would be another two years before she would be interested in performing again. Anna contemplated this hiatus and realized it was actually a gift.

The year 2011 was eventful for Anna. She graduated from college with a Bachelor of Arts degree, married the man of her dreams and relocated to Beaufort for his job with a commodities brokerage firm. New in town, Anna began to investigate ways to connect with her community and share her talents. Once she settled into her new home, Anna auditioned for the May River Theatre’s 2012 production of Annie. She not only got the part of Grace Farrell, but also rekindled her love for the stage. She adored working with the children. She recalled, “It felt like finding a home in a place that was not so familiar.” Anna later performed in Company at the May River Theatre, Music of the Night at the Main Street Youth Theatre and Grease at USC Beaufort. Her favorite recent role is that of General Cartwright in last summer’s performance of Guys and Dolls at the Main Street Youth Theatre. “It’s not that often you get to stand on a table and belt out a high C, so that was really fun for me. It was a great show. I was honored to be a part of it,” she said. Forever stretching her talents and expanding her skills, Anna co–wrote and directed Main Street Youth Theatre’s December 2014 musical entitled Holiday on Main. Schoolhouse Rock is her next major production there. It will run March 20-29.

Having identified a need for theater arts instruction for youth in this region, Anna now offers production classes for pre-teens and teens at Main Street Youth Theatre on Hilton Head Island and The Children’s Theater at USCB’s Beaufort campus. Her interdisciplinary program encompasses singing, dancing and acting, similar to the North Carolina Theater Conservancy Production Company. She also teaches piano and voice lessons to private students. Anna enumerated some of the practical life skills that are developed and strengthened by being part of a theater production and the theater family: How to communicate; how to work with others; how to build healthy and trustworthy relationships both on and off stage and how to be confident in yourself.

For her own ongoing development as an actress, Anna is receiving training with Shakespeare Rep, a new classical professional theater company in Beaufort. It also offers a program for high school students to study theatrical arts through the work and life of Shakespeare.

Opportunities abound for children and also for adults who want to participate or volunteer in the theater arts programs in the area. For more information, please contact Main Street Youth Theatre at msyt.org,  USCB Center for the Arts atuscbcenterforthearts.com or Shakespeare Teen Apprentice Program at shakespearerep.co.

In addition to Anna’s busy schedule with the performing arts, she joined the board of directors of the Beaufort Historical Museum in 2013 and currently serves as the president. The museum, at the old Arsenal building on Craven Street, houses a collection of local artifacts. It is also a gateway to the many tours offered in the area. Anna spends her weekday mornings there scheduling volunteers, developing docent training and the new auxiliary greeter program. Her vision is to offer a hub for social connections, as well as a venue for volunteer services. To inquire about volunteer opportunities, call the museum at 843-379-3079.

Anna is: an accomplished sports fisherman and loves to go deep-sea fishing for marlin and sailfish with her husband, Brooks, and her dad. She and her dad plan to participate in two tournaments in N.C. this summer.

Anna has: a huge compassionate heart
for animals. She and her husband have two dogs, Talullah, a yellow lab, and Maybelle, a mixed breed.

Anna is searching for: desirable studio space for her piano and voice students.

Contact Information: This email address is being protected from spambots. You need JavaScript enabled to view it.