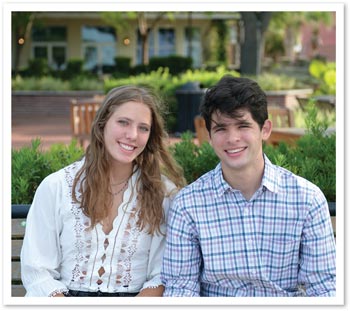 Anna and Chas Brown are fraternal twins, recent graduates of Beaufort High School, grandchildren of a dear friend and a delight to talk with. They are on their way to big things in life; Anna will be entering Duke University and Chas will be entering Princeton University this month. We met at Herban Market, on the Bay in Beaufort, and Chas remarked, “I’m going to miss this beautiful view.”

The twins have racked up an impressive list of awards, achievements, accolades, and of course, scholarships. They come from a family rich in the tradition of educational excellence, and a love of learning, and it shows. Two grandmothers were teachers, a grandfather a college professor at University of South Carolina. Their mother Susan is a teacher at Beaufort Elementary, and is the founder of “The Little Brown School,” which is an innovative preschool in Port Royal she started several years ago. Anna and Chas laughed that they were too old to attend, as they were already at Riverview Charter School, but their little sisters did.

Anna has excelled in academics and sports in high school, and on Friday, May 13, 2022, she was named one of three South Carolina students chosen as a United States Presidential Scholar. Then on the following Monday, May 16, Chas received the news that he received a National Merit Scholarship. Talk about winning the academic Powerball!

These two young people are amazingly modest, however, and seem like normal teenagers despite their sublime academic achievements. They recently returned from a service project trip along with their mother. “We went camping in the Pisgah National Forest,” reported Anna. When I asked about their accommodations, they both replied, “a tent!” It was their first-time camping, and they enjoyed it. They were involved in clearing trails in the park for hikers, and it was all fun, but sleeping was lumpy, they agreed.

I asked them what is the longest they have ever been apart. Unsure of the exactness, they believe it is two weeks, if one of them went on a trip with other friends. This will be one of the challenges of their freshman year, but they will handle it. They chose to go to two different colleges to “be our own person.”

Why did they choose the universities they did? Chas is interested in studies in economics or psychology and is already looking forward to the senior thesis that all Princeton students must write. He sees a path in academia, teaching in higher education one day. He also liked the proximity of New York City to the campus, where he can catch a train and see a Broadway play!

Anna is interested in science, particularly chemistry and was impressed by the prominent level of research Duke University has in environmental issues. She is also looking forward to playing club sports at Duke, having been a track, cross country and soccer player in high school. Club sports is a level under varsity teams, but they still play against other schools.
I asked them what advice they would give to students entering high school in the fall. Chas said that although he did not do this, he would say to experiment with lots of activities and organizations, and then find what you really love, and go deeper with it. For example, he has an interest in art, but has not had time to pursue it (yet!) because he spent a lot of time after school working.

I asked them to name a teacher who made a difference in their lives thus far. Anna enthusiastically mentioned Dr. Alexandrina Bota, her chemistry teacher at Beaufort High, who is from Romania. She taught her students to “think outside the box,” she said, and they learned so much more that way.

Chas mentioned Paula Corbett, who taught him Academic Writing and Research. This is not surprising—remember he is already excited about his senior thesis three years away!
When asked what they will miss while off at college, they agreed they will miss their dog, Reese, and their family, which includes little sisters who are triplets. “They are already making charts about taking over our bedrooms!”

There is no doubt there will be exciting updates on the Brown super twins! Stay tuned.

Up Close:
Anna and Chas had some advice for parents to help their children excel:
• Be supportive, but not overbearing in your child’s education.
• Teach your children how to advocate for themselves. For example, if there is a question for the teacher, your child should send the email, not the parent.
• Ask your kids at family meals what they learned today. It sounds very old-fashioned, but it really works.