A Woman, A Dog and an Alligator: A Tall Tale 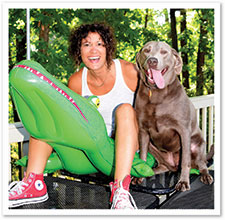 The story spread as fast as kudzu’s invasion into the Southeast. From the salons to the saloons, and places in between, locals were talking about Amanda Russ, the owner of Pomodori Italian Eatery on Hilton Head Island, who jumped into a lagoon and wrestled the dog she’s been caring for this past year from the jaws of an alligator.

Here’s the truth, out of the mouth of Amanda: She didn’t jump into a lagoon to save her silver-haired Labrador retriever named Blu, while the dog was being attacked by an alligator. However, she didn’t just stand on the banks of the lagoon, at the fifth hole of Sea Pines Country Club, screaming her dog’s name at the top of her lungs. When the gator miraculously released Blu, Amanda’s knee-jerk reaction was to forge into the murky water and pull the dog to safety. And that’s what she did.

But the story about a neighbor hearing a little splash (Blu), soon to be followed by a big splash (Amanda) never happened. And no, Amanda didn’t do her best Crocodile Dundee imitation that surely would have made her an overnight YouTube sensation if, say, one of the nearby golfers had caught the terrifying act on video.

“Another story going around is I jumped on the gator’s back and pulled my dog from the gator’s mouth, and probably poked his eye out in the process,” Amanda said. “That’s not even realistic. You couldn’t even get a dog from a gator’s mouth.”

But let’s not downplay the danger of what happened. “I was up to my calves in the marsh and there was an alligator underneath the water that had the taste of blood on him and I didn’t know where he was,” Amanda said. “It wasn’t a smart move.”

Blu decided to give Amanda the scare of a lifetime on April 3. Amanda said she was playing fetch in the front of her house with her 1 1/2-year-old retriever before she planned to head to work at her popular Southern Italian-style restaurant. Suddenly, Blu heard the whack of a golf ball and darted around to the back of the house, Amanda said.

“I went running after her, which I normally don’t do, but I didn’t want her to bother the golfers,” Amanda recounted. “So, I’m running after her saying, ‘Blu, no Blu,’ and I hear this splash, and I’m thinking, great, there she goes into the lagoon.” As a true water dog, Blu couldn’t resist the temptation on a few other occasions.

The next thing Amanda remembered is hearing the golfers say, “Oh my God, there’s a gator in there.” Amanda said she thought the golfers were talking about Blu, sloshing around in the lagoon. But much to her horror, Amanda witnessed the gator’s jaws open and clamp down on Blu and pull her underwater. The alligator inexplicably released Blu, who then popped to the surface. Amanda saved her dog by stepping into the water and grabbing her out.

“In hindsight, my hand could have been bitten off. It wasn’t a smart move,” Amanda repeated. “It was dumb. But that’s my dog, I love my dog.”

The trauma of what happened and what could have happened caused Amanda to sit on her laundry room floor for about a half hour and cry. When her friend came over, the two took Blu to the veterinarian. Blu had a full teeth ring on her hindquarter and underneath where the gator had clamped down. A two-inch laceration from the reptile’s main tooth also was visible.

Blu has fully recovered after suffering through nightmares immediately after the incident. Amanda said when Blu was sleeping (always in her bed), they’d hold hand and paw, but Blu would wake up and bark furiously in the direction of the lagoon and pant for 45 minutes before settling down.

Amanda said Blu learned from what happened and stays clear of the lagoon. “She realizes that is not her territory. Ocean and pools are OK, but she won’t go back in the lagoon,” Amanda said.

In the unlikeliness of it happening again, Amanda said she’d save her dog. “It’s what your instincts do. But I don’t let her out without a leash anymore,” she added. As for the story about the dog, the owner and the alligator: “It’s folklore now,” Amanda said. “I still have people coming up to me and asking me if I have alligator skin boots yet.”

Education: History degree from the University of Georgia; Masters’ degree in Italian Cuisine at Italian Culinary Institute in Calabria, Italy.

Why Did You Adopt Blu? “My friends, Wyatt and Sophia, asked me to help them raise Blu because they knew how much I loved her. She’s the best roommate I can ask for. She doesn’t even leave dishes in the sink!”

Favorite Cookbooks: Anything by Ina Garten. Everything in her books is full proof. Baked: New Frontiers in Baking by Matt Lewis and Renato Poliafito. 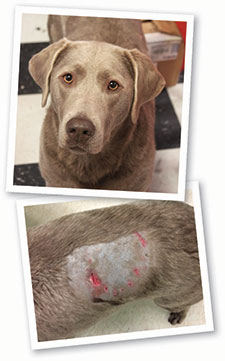