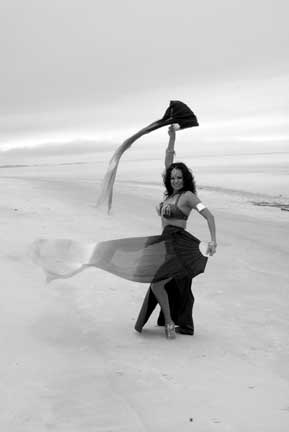 In a dimly-lit room, the sultry air is filled with rhythmic sounds of drums and sitars. Hips roll and sway. Torsos writhe, rib cages glide and bellies undulate in ways you never imagined possible. But it's not what you think.

"People interpret belly dance wrong," insists Alma Valladares, who started taking belly dancing classes three years ago, and now teaches at A Healing Store in Palmetto Bay Marina. "They think it's an exotic, sexual dance, but it's not even about that. The women who take my classes say that it's a way for them to release stress, to meditate. It's a spiritual dance to bring out the woman in you."

Belly dancing can be done by women of all shapes, sizes, fitness levels and ages-even children. In Alma's classes, there are women who come to relieve stress, others who want to learn a few moves to do for their boyfriends, and still others who find it gives them a confidence boost. Alma notes that traditionally in the Middle East, women did belly dance amongst themselves, not as a show or to seduce men. They looked at this ancient art as providing health benefits, including loosening up hips before childbirth. Nowadays, practitioners have ascribed to belly dancing such positive side effects as improving flexibility, core strength and posture; relieving tension; and aiding digestion. But more importantly, at least to Alma, are the mental and spiritual impacts of the practice.

"It helps you get in touch with yourself," she says. "It's not about how you look. Some women are afraid to show their midriff; but once you're in class, we dim the lights and it's so comfortable, it doesn't matter what shape you are. Sometimes I make the women close their eyes so they can just listen to the music and let go."

Though she was born in Mexico and raised in Southern California, Alma feels such a strong affinity with the Middle East that she jokingly suggests she may have spent a past life there. (Alma means "soul" in Spanish, and though she hated the name growing up, she learned to like it after her mother told her the name was chosen because Alma had "a good soul.") Her interest in belly dancing has resulted in wider explorations of Middle Eastern culture-the food, music and language-as well as investigations of still other world traditions. For example, she's lately been turned on to Buddhism, and is "excited to take a journey in that direction."

Of course, she always holds a special place in her heart for Mexican culture, having spent the first six years of her life in Cuernavaca. "I love that our families are very tight," said Alma, who often travels back and forth to California, and takes trips to the Mexican border. "It's not about material stuff. And I love the food. The joke is that everywhere I go, I have to have my hot sauce."

With her multicultural roots and plenty of Middle Eastern friends to teach her their ways, Alma is cultivating not just a tolerance of, but an appreciation for diversity. "Everybody thinks differently," she said. "If you are not open-minded, you may look at someone and instead of seeing a person, you see an image. People are quick to point fingers and say, 'they are doing that wrong,' but you have to open yourself to understand people and look at them as human beings."

Hometown: Laguna Beach, CA
Hobbies: running, fishing, being in the ocean
Prize catch: a 6-foot shark-it took her 45 minutes to reel it in (she threw it back, of course)
Favorite belly dancing music:  Phil Thornton and Hossam Ramzy
Vocab: Hafla, in belly dancing parlance, means a party with food, music and dance.perfect for a girls' night in!