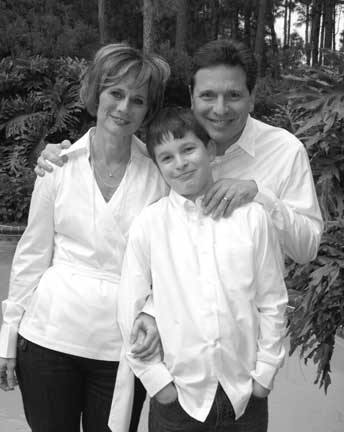 On a crisp, Friday evening in October, Alison Fargioni, her
husband Joe, and their son Michael, enjoyed a family dinner
with their daughter Sarah in Mariner's Cove. Afterward,
while in the center cross-over on 278, waiting to turn left near
Windmill Harbour, the family's entire world was literally turned upside
down when their orange Jeep Wrangler was struck by a turning car.

"I had just finished reaching for a piece of gum down in my purse,"
remembers Alison. "All of the sudden, as I clicked my seat belt, I heard
my husband say 'Unh!' and what sounded like a freight train hit us."
Alison kept her eyes tightly shut as the car tumbled and rolled in mid-air
for what seemed like forever, but in reality, was only seconds. "I heard
Michael scream, the horns honking, the crash, glass breaking. I was
awake the entire time." When she opened her eyes, the scene didn't
compute. They were hanging upside down. The other car had come to
rest on top of them. On the driver's side, Joe was silent, blood ran down
his face. Alison couldn't find Michael. "I started screaming Michael's
name," she recalled. Finally, she saw two, tan Croc Flip Flops peeking
out of the collapsed canvas. As she called his name, the two small feet
started "flapping" and Michael started to moan.

A woman of deep faith, Alison describes that night as a battle zone
where God was the Commander placing the right people in the right
places at the perfect time. Within seconds of the crash, a kindly man
helped Alison crawl out of the jeep. "I'll never forget looking up and
seeing a crowd of people running toward us," she recalled. "It felt like
they were legions of angels sent to help." Indeed, there were three nurses
who stopped to render aid. The man who got Michael out of the car was
an off-duty EMS worker. The ambulance, complete with an acquaintance
from Michael's H2A swim team, arrived within seconds. Others in the
crowd called family members, their pastor, and even prayed with Sarah
by the side of the road when she arrived.

The Fargionis later found out that hundreds of people were praying for
them that night and in the days following the accident. Two groups from
their church (Christian Renewal on HHI) were in the traffic. One group
headed onto the Island, and one group leaving the Island. A woman, who
attends their church, got the call the following morning to pray while she
was out of town at a convention. She had the entire convention pray for the
family. One of the nurses' - who stopped to help that night - husband attends Christian Renewal, and another nurse was a fellow Hilton Head Christian Academy parent. The faculty/staff and students of Hilton Head Christian Academy, where Michael is in 6th grade, began lifting up the family. "By the time we got to the emergency room, the waiting room was full of people from our church praying. I wish I could have heard it!" Alison smiled.

Miraculously, the Fargionis did not suffer any life-threatening or disfiguring
injuries from the accident. "It's just a miracle that Joe isn't crippled or
dead," breathed Alison. The entire driver's side (where Joe was seated) was dented in a U shape- having taken the brunt of the impact. When the insurance adjuster examined the car, he told them that he had never seen anything like it, and wondered if they were indeed "okay." The responding police officer said that the roll bar of the Jeep likely saved them. If they had been in any other type of car, they would have been crushed when the other car came to rest on top of them.

"How Great is Our God": A Song with Special Meaning

It's been several weeks since the accident and Alison has had time to reflect. "That night, by the side of the road, a praise song that we sing in
church kept playing in my head," she explained. The words are: How great
is our God! Sing with me - How great is our God! And all will see - How
great, how great is our God!

"I think that God allowed me to be awake and remember everything
so that I could tell everyone what a great and faithful God He is," she explained. "I want people to know that God is real," she added. It's a message that she used to hold back from giving, but is now passionate about. "If you love and serve the Lord, He is faithful to protect you. If the accident is what it took to make me bold, I'm okay with it. We have a saying in our family- 'God's got our back!'"

Integral to the Fargioni Family are.
Son Michael, a sixth grader at Hilton Head Christian Academy. Daughter Rachel and her boyfriend Derex Fox (who selflessly slept in his car
to relieve Rachel while she stayed with Michael in the hospital in Savannah after the accident.)Daughters Juliana Fargioni and Sarah Pejeau and her husband Charles and baby son Ryder.
On Alison's nightstand: Chapstick!
Profession: Alison is a decorative painter specializing in
faux finishes, murals, and furniture. She would love to
have her own furniture line some day.
Favorite Bible Verse: God gave me Psalm 91 after the accident.
People would be surprised to know that . "I'm shy by nature!"