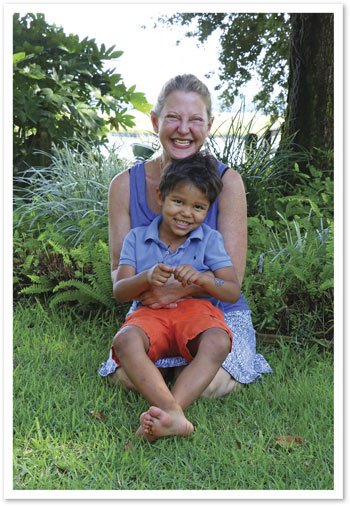 “You are my wish come true,” Alice Gray responded, giving her son a smile that brings a whole new meaning to being #blessed.

Alice Gray’s journey to motherhood was long and not without challenges. “I always knew I wanted to be a mom,” she said, and she ran the gamut trying, including the arduous trials of failed fertility treatments. Finally, after more years than she had planned, Alice Gray decided to give open adoption a try.

After six months of waiting, she was selected to become a mom. Alice Gray walked through every stage of the pregnancy with the baby’s biological mother, including the home birth, but six days later the biological mother changed her mind and decided to keep her son.
Alice Gray chronicled her journey on Facebook, including her heartbreak, and in a miraculous twist of fate, someone she had known 30 years ago reached out to her and sent her a picture of a baby.

“It was a huge shock because it was totally unexpected,” Alice Gray recalled. “I thought it would take a long time to be chosen again, since I was older and single, but I got the call about Jasper just five weeks after the disappointment of the first open adoption experience. As soon as I saw his picture, I knew he was the one who was meant to be my baby.”

Shortly after receiving the baby picture, Alice Gray boarded a plane and flew from Portland, Oregon, where she now lives, to Tennessee to meet her new son. That same day, in a whirlwind open adoption process that was lightning rod fast compared to her first experience, Alice Gray met with the biological mother and an attorney, and after a dinner that night she and her son were tucked into a hotel room—one happy little family.

Alice Gray had to stay in Tennessee for 10 days while completing the adoption process, and then she flew back to Portland with her son, Jasper, who was named after the county in South Carolina where Alice Gray’s family has its roots. She grew up in Ridgeland.

Alice Gray talked honestly about the challenges of becoming a mom later in life than she’d planned, including times of loneliness, sleep deprivation and dealing with a child who suffers from a severe allergy to corn.

“Corn is not always listed as an ingredient in many of the foods of which contain it because labels are only required to list the first eight ingredients,” Alice Gray explained. “Very often, corn and/or its derivatives will be the ninth ingredient in those products, so this has been an added challenge.”
Alice Gray uses a holistic approach to Jasper’s corn allergy. Meals are vegetable and protein based. Dining out is a rare occurrence because any foods that contain corn can cause allergic reaction issues that can take up to four days to resolve.

Now that he’s older, sleep deprivation has become less of an issue for Alice Gray. “Jasper is an early riser though. He’s up every day usually around 5:00 a.m.” She smiled. “Fortunately, I’m a morning person.”

Alice Gray feels strongly that mothers need to have a support system. She recently joined a group of moms who meet on a weekly basis via video conferencing. The moms vary in ages and have varied life experiences. “It takes a tribe to be successful at parenting in today’s world. Having a community of moms who can honestly share the challenges of raising children is important. When you are able to share with others, you discover you have similar challenges and experiences, and you don’t feel alone.”

Alice Gray hopes when Jasper gets older, she can share her life experiences with him, including her love of international travel. She wants her son to see the world and to experience the way other cultures move through life.

When asked to talk about her son, Alice Gray smiled. “He loves to read. He is very smart. He is very social and very spirited.” When asked what she likes best about being a mom, she didn’t hesitate: “I love sharing my life with a little boy and watching him grow. I love seeing things through his eyes.”
This single mom does admit to looking forward to a time when, as her son grows, she can get back to working on her documentaries, having social dinners with friends, and some of the other things she left behind for motherhood.

“He is my wish come true,” Alice Gray said with such love in her voice there is no doubt it’s been worth every bit of what she had to go through to make that wish come true.