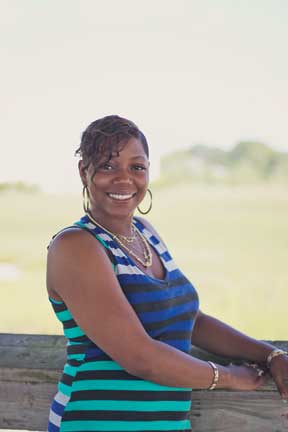 Beneath her glowing smile hid a basket woven of thunderstorms and sunbeams. July 20, 2009 was more than a thunderstorm; it was nearly Afthen Driessen's tsunami!

An accidental shooting sent a bullet into her back and out her thigh. The blood loss was so great; her mother was told that Afthen would not survive. Airlifted by helicopter to Savannah Memorial Hospital, Afthen was shocked three times to restore her life. "I awoke a week later, pleading to know what happened," Afthen recalled. "I remembered nothing about the incident. Uppermost in my mind was the shocking news from my doctors that I would never walk or have children again." Already the mother of twins and armed with strong Christian upbringing, she decided to prove them wrong.

With a lively spring in her step and a warm, vivacious welcome, Afthen's life-changing secret was not evident when she greeted my husband and I at Sunset Bay. Following a long drive, we stopped there for a bite. The Hilton Head native, who remembers the days when "Highway 278 was only two lanes, with very few traffic lights, and there were still lots of dirt roads," immediately captured our hearts. Later, she reminisced, "It was a very family-friendly community. We crabbed, deer-hunted and fished. From the time she was a baby, Afthen and her siblings attended Mt. Calvary Missionary Baptist Church. "We never missed a day." After church we spent every Sunday at Singleton Beach, and..." she grinned, "I'm beached out!"
Her first job at Wendy's prompted Afthen, then age 15, to declare to her mom, Stephanie Driessen, "This is toooo hard! I want to be a kid again!" But a deeply instilled work ethic, learned from Abe's Shrimp House, her cousin's family-owned and long-time favorite Hilton Head hot spot, spurred her onward. Just like her mom, Afthen spent many years handling banquets for Sea Pines Resort and Hilton Head Beach and Tennis. "I love this business and all the great people I meet."

Now, working at Roast Fish and Cornbread every morning and Sunset Bay in the evening, she manages in between to take care of her twins, Dakquan and Dashaun, and yes, her three-year-old miracle, Ma'kaely Faith. "The doctors told me once I would not have kids based on the difficulty I had with the boys. Then they said after the shooting, I'd never have another child, and Ma'kaely arrived. That's why her middle name is Faith. How come these doctors keep tricking me?" she laughed easily.

Within inches of her few serene, sunbeam moments lurked sheer chaos. "I was five months pregnant with Ma'kaely, doing the morning rushing, when I discovered the truck keys missing. I quickly called my husband, Danny, anxiously requesting where they were. As he insisted they were in their normal place, I heard a huge BOOM! I slammed down the phone, and rushed toward the sound. I could not believe my eyes! Our truck was in the kitchen! I stood there and cried, as the twins were not in sight, and I panicked. I called Danny back squealing the truck is in the kitchen!" Danny dashed home, while Afthen located the twins, who did everything together. They had snatched the keys and climbed in the truck. One put the key in the ignition and grabbed the steering wheel, while the other crawled onto the floorboard pushing the gas pedal. "When I found them safe, I cried even more! Those boys have caused a lot of tears!"

Behind her winning smile and humorous stories about her children rests a serious, philosophical gal whose life nearly slipped away. "We have good days and bad days. When we learn to conquer the trying ones, we are okay. Now I have a grip on things that used to really push me over. There are many worse off than we are. I ask God's forgiveness if I have done anything to hurt anyone...and always try to forgive others."

True Confession: "I'm always late! My clock is set 45 minutes fast. I only look at it, so I can be on time!
Inspired By: "My mom-she has always been a champ and bounced back from everything. My great-grandmother, Alice Driessen, 92, made me a stronger person in many ways."
Her Rock: My husband, Danny-he has stuck by me and is always there for me.
Best friend, Lashay Watson, comments: "She has had a very difficult life, yet she never judges. She is always there when you need her."