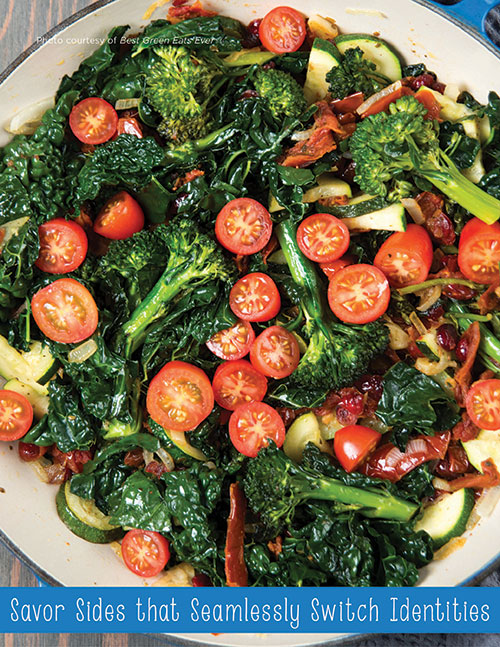 Usually entrees are not only the stars of meals, but of leftovers the next day, too. Don’t shun your sides, though. In fact, they often can do double-duty and easily transform into the centerpiece of an entirely new meal.

When you are dealing with vegetable-based side dishes, the news gets even better. You can energize a main dish with the effortless inclusion of an array of already prepped, nutritious produce. The excellent grilled portobello mushroom, sweet pepper and onion side below is a tasty example. It’s served at room temperature the first time around; the next day I lightly pureed it (still leaving somewhat of a chunky texture) and folded it into ground beef and formed it into three-quarter veggie burgers that I grilled. Add a bit of egg or whole-wheat bread crumbs if it’s not fully holding together on its own.

As for the broccolini, cherry tomato and kale super skillet below, I took “Best Green Eats Ever” author Katrine van Wyk’s advice for its second outing: I heated it lightly and then gently tossed it with cooked, hot pasta for a savory main dish.

Following are a few other save-the-sides ideas:

> Puree a carrot-ginger dish and serve as a hot soup with shredded rotisserie chicken breast in it.

Bring a pot of water to a boil and add a steam basket. Place broccolini in the basked and steam for 2 to 3 minutes. Remove broccolini from heat and set aside.

Carefully add the olive oil to a medium-hot skillet and stir in the garlic, continuing to stir as the garlic flavors the oil. Take care not to burn the garlic. Add in the red onion and saute for 3 minutes; then add the kale. Saute for 1 more minute, or until the kale has wilted. Add the cherry tomatoes, zucchini and steamed broccolini. Sprinkle the salt and pepper over the dish.

Courtesy of Best Green Eats Ever

Brush vinaigrette over vegetables. Grill until mushrooms are tender and juicy, and peppers and onions are crisp-tender, about 12 minutes per side.

When finished, turn off grill and when cool enough to work with, cut mushrooms and peppers into ½-inch-thick strips. Toss mushrooms, onions and peppers in a bowl. Season with salt and pepper. Serve at room temperature.

Dee McCaffrey, author of The Science of Skinny Cookbook, has an idea for you for a quick and nutritious lickety-split “banana split.” She advises to, “Switch up your morning routine by having dessert for breakfast. ... Organic Greek yogurt is thick and creamy like ice cream.” To emulate McCaffrey’s results, split a banana and top, to taste, with (preferably organic) plain Greek-style yogurt, 100 percent fruit preserves, unsweetened shredded or flaked coconut and a sprinkling of chopped raw almonds, pecans or other nuts.

Lisa Messinger is a first-place winner in food writing from the Association of Food Journalists and the author of seven food books, including Mrs. Cubbison’s Best Stuffing Cookbook and The Sourdough Bread Bowl Cookbook.