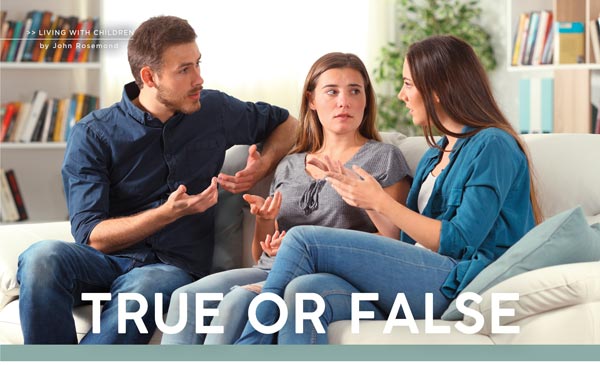 We interrupt this monthly column with a three-question quiz, following which you will find the correct answers.

True or False? Telling a child that her feelings concerning a decision you have made
are irrelevant and that you will not discuss the matter with her is likely to cause
psychological damage to the child, including trauma to her self-esteem.

True or False? Answering “Because I said so” to a child who wants to know the
reason behind a decision you have made is likely to cause psychological
damage to the child, including trauma to her self-esteem.

True or False? Refusing to help a child with a problem she brings to you is likely to
cause psychological damage to the child, including trauma to her self-esteem.

In each instance, the correct answer is False, which means that children are much, much sturdier than the general public has been led to believe. And who, exactly, are the primary sources of said belief? Why, mental health professionals, that’s who! Trust me, I am one.
To any of the above statements, most parents know that False is the correct answer, yet they act to the contrary. Why? Because most parents are intimidated by powerful emotional responses from their children, and children—the post-boomer species, that is—have a reputation for emoting powerfully when things are not to their liking.

So what if children don’t like a decision you make, a boundary you set, an instruction you give, or a consequence you levy? As Bob, my favorite uncle, was fond of saying, “Whadda they know?” The answer, according to Bob: nuttin’. Children have no sense of life’s big picture. You do, presumably. And so what if you could, given more thought and time, have made a better decision in any given situation? Will your cognitive impulse control problem traumatize your child? No. Therefore, give it a shrug and move on.

Which brings us to the most powerful four words in a parent’s vocabulary. I heard them a fair number of times, and I am not beset by “Because I said so” trauma (albeit I may not be the best judge of that). Those four words are simply affirmation of the legitimacy of your authority. Does an Army private have to obey a lieutenant only when said officer is able to give a reason that satisfies said private? No. The private must obey simply because the lieutenant says so. In your home, mind you, you are not a lieutenant, you are the Emperor/Empress. Embrace it, and in the process, help your child comprehend how the real world works.

Concerning Question 3, two FACTS: First, children do not know what they need; they only know what they want. Second, children have a low tolerance for frustration. Putting the two together, one arrives at JR’s Parenting Axiom Number 14-D: Children usually ask for help before they truly need it, if they even need it at all.

Parents should be conscientiously conservative when it comes to helping children solve problems lest they—the parents, that is—become enablers and their children become obnoxious whiners. We’ve already covered the four most powerful words in the universal parenting vocabulary; here are the seven most powerful: “You don’t need my help with that.”
Steel yourself for much wailing and gnashing of teeth.