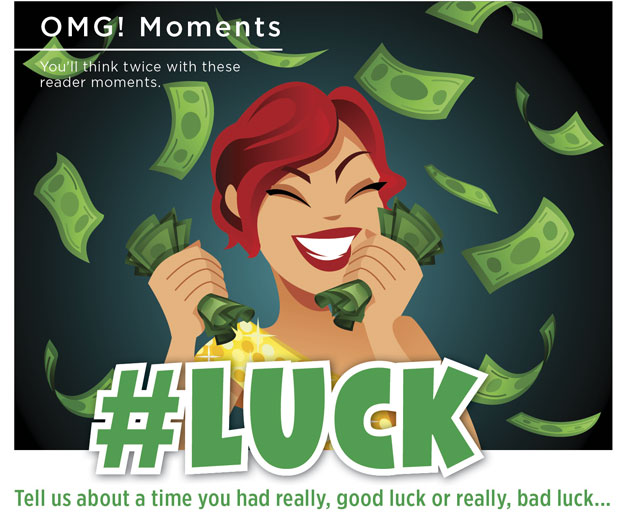 While working at Uniform Issue at FLETC, I found a $50 bill in a pants pocket after checking about 150 pairs of pants finding mostly nasty mouth pieces or ear plugs. Whoop, whoop!

I have had both. I was married 22 years and my husband committed suicide. Two years later, my 16-year-old was killed in a car accident with his best friend. Now I have been with the love of my life for 14 years.

After I was married four years, my husband left me. I ran to my cousin who I had not seen in many years and she rescued me from my despair. Then I met many friends who I love very much – so I call it luck or a blessing to have Sherrie and Tonya in my life today.

I was playing the slots in the Bahamas and put in my last quarter and moved on. The very next person who played it hit the jackpot. Just. My. Luck.

When flying to the Dominican Republic one time, I was upgraded to first class. Oh, yes!
When I got a royal flush on a slot machine and won $4,000. I thought I was playing on the penny slot machine which would have only paid $100.

A long time ago, I was hit by a car head on—I was standing in a median and someone came flying over. It was a miracle I survived. It changed my life. Miracles are from God and the presence was right there cradling me in life and love!

When I was at the Grand Canyon, my husband was taking pictures, so I walked ahead. An Elk chased me towards the edge—I ran behind a tree into bushes. Five minutes later my husband says, “I heard an Elk was chasing someone—did you see it?” He ended up buying me an Elk shot glass…

Me and my friend spent a few days in Daytona Beach. On the way home I realized I had left my carry-on with my expensive jewelry inside sitting in the lobby of the motel. I came to a dead stop on I-95—my friend was screaming for me to get off the road. Next exit I sped back 80-85 mph to Daytona. She said if I didn’t get my carry-on back, she was calling her husband to come get her (his driving is worse than mine-lol!)

When I chased a rainbow and ended up on tour with The Grateful Dead!

One particular time with my Mom at a big casino in the Bahamas, I was up $300 and 3 scotch and waters. Mom said it was time to go, so we hailed a cab. The driver was very friendly deciding to put his arms around me as I exited the vehicle, when Mom told him sternly to take his hands off me, I did not need help. When I went to pay for our dinner with my big winnings, they had disappeared. I learned never to put money in front pouch of my pink hoodie again!

California driving two hours from Pasadena out to the Mojave Desert to give a speech, I was doing 90 in 65 mph zone. I got pulled over, “sorry, sorry, I’m late…” he let me off the hook, no ticket, no warning. Ten hours later driving home, same road, similar speed, OMG—same cop! He said, ‘don’t even try.’