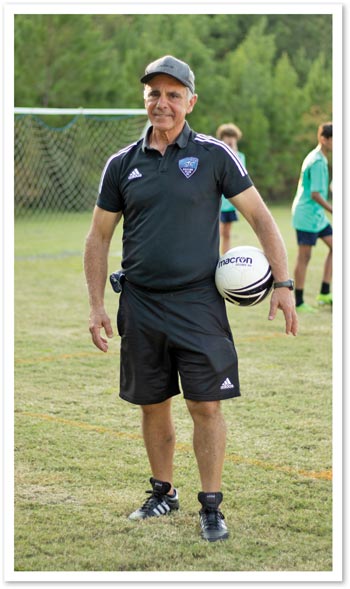 When Anthony Serpe says he lives to coach girls soccer, he means that quite literally.

“When I got sick and disabled from work,” he said, “it was such a close call that I didn’t want to do the corporate thing anymore. I wanted to do what I love.”

Anthony was an athlete all through school and college, and today his five best friends are people he played football with in high school. They have a text chain, and whenever he goes to his native New York, they all get together. Both of his daughters are athletic, and their participation in soccer is what got Anthony involved in the first place. Now he plans his whole year around it: In winter and spring he coaches girls soccer for May River High School, in summer and fall it’s the travel team he started with girls from area schools. “Sports have been an important part of my life,” he says. “They’ve been my connection to friends and family, so seeing the girls make those same connections makes me really happy.”

In 2009 Anthony had to face cancer. He beat it, but the radiation damaged vertebrae in his neck, and a year later he had a severe problem. He was in the hospital 54 days before they even figured out what it was. “My neck collapsing was way worse than my cancer, and my cancer was bad,” he said. “I went through agony. But when I came out of the hospital, I made a list of all the positives and negatives, and way more good came out of it than what I can complain about.”

One big silver-lining was the party his old sport buddies threw for him in New York, attended by hundreds of people. But the most outstanding positive was the love and support of his family. Between his wife, daughters and sisters, he did not spend a single night alone in the hospital. They all rearranged their lives to be with him. “I can’t understand living through what I went through without an advocate,” he said. “They answered for me when I couldn’t speak myself.”
Surrounded as he is by strong women, it’s no surprise that Anthony has some very definite ideas about how to coach girls—in soccer and in life. For instance, he never lets them make needless apologies, or take no for an answer when they deserve better. “The funny part is that we expect girls to be pretty and proper, but once they get on the field, they’re supposed to be animals,” he said. “I don’t like that. Girls are taught to be polite, which is fine, but they need to learn how to fight for their rights harder and stronger than anybody else. Because it’s not easy for them.”

His favorite part of coaching isn’t watching the girls score a winning goal or drilling them hard in practice—it’s stretching. “If you just sit there and listen,” he said, “they’ll tell you everything you need to know. They talk about school, their boyfriends, their jobs, everything. It makes me feel so good to be connected to their lives.”

Up Close:
Family: Wife: Wendy. “She’s the champion of the family. I would have been a dead a long time ago if not for her.”

Daughters: Alexandra, a doctor in Indianapolis, and Arianna, a senior at NYU studying educational policy

What happened when he tried to coach boys: “It wasn’t for me, haha.”

What still makes him choke up a decade letter: the essay his daughter wrote about him while he was fighting cancer, which won a county-wide school contest

Perservering: he’s had type 1 diabetes since age 7, but his parents never let him use that as an excuse. “I could either dance around it, or with it, or fight it. I always thought it was a waste of energy to fight it and feel sorry for myself.”