How His Immense Love of Animals Helped Transition Him to Heaven 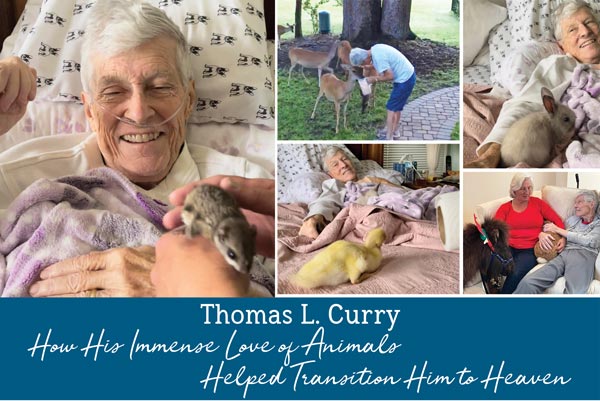 Born September 4, 1940 in Williamstown, New Jersey, and gifted with a huge heart, there is no doubt the late Mr. Thomas L. Curry was one special human. Growing up on a large farm in New Jersey, hunting, gathering and farming filled his daily life. Little did he know he would have a life-changing experience that would not only alter his mindset about life, but also change his heart, too.

When Thomas was in his early twenties, he was hunting with a friend, one of their common pastimes. His friend shot a deer but it did not kill it completely. While the friend didn’t seem to care as much, Thomas could not stop thinking about the deer. The next weekend, he found the deer hidden in a bush, biting away at itself, trying to get the bullet out of its body. With the gruesome scene and tears shed, Thomas decided right then and there his hunting days were over. 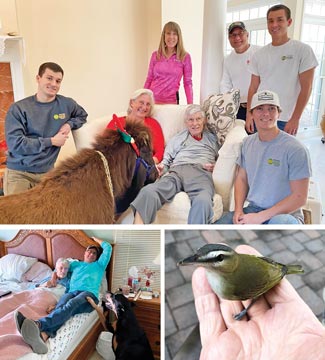 From that day until his last breath on January 4, 2022, Thomas became a huge animal lover and advocate. He dedicated his life to wildlife rehabilitation and developing connections with all walks of life, two- and four-legged alike. Making a career in construction as a project manager, he never stopped caring for animals along the way.

“One time he was heading up a project for a hospital where some unfortunate skunks were hiding under the building. He stopped the exterminators and said, ‘Give me a day.’ By the next day he had saved a mother skunk and her three babies. It was a sweet story,” Tom Curry, II, Mr. Curry’s son, said.

Almost 40 years vegan, a “health nut” and a nature enthusiast, Thomas devoted his life to keeping it healthy, happy and furry. When he moved into the equestrian side of Rosehill in Bluffton, he became known by all his neighbors, especially the critters throughout the neighborhood. A few of his favorite things included feeding carrots to the horses daily, and taking walks with his wife, Liane, where deer would follow them everywhere they went.

"In his final days, three wonderful animal-affiliated organizations fulfilled his dying wish of being surrounded by the true loves of his life—animals."

“One of my favorite stories is one night my parents were on a walk, and a neighbor walking his dog yelled out, ‘Hey, do they know you?’ pointing to the multiple deer following along like pets. My parents couldn’t stop laughing.” Tom said. Just a few days before Thomas passed, a deer was hit and killed in Rosehill, leaving a little one behind. When they went to rescue and relocate the deer, Thomas was there to help, and of course, the young offspring walked immediately to him.

Mr. Curry’s last breath was taken by the struggle of pulmonary fibrosis. Over the years of working in construction, plenty of dust and possibly asbestos filled his lungs, making it impossible to survive at the end of his 81 years. In his final days, three wonderful animal-affiliated organizations fulfilled his dying wish of being surrounded by the true loves of his life—animals. Laura Sterling with Laura’s Little Critter Barn, Cheryl Crosby Phillips with Cheryl’s Place Horse Rescue and Susan Kilian with Singing Mouse Wildlife Rescue provided multiple furry friends to come love on Mr. Curry! Flying squirrels, rabbits, ducks, and the star of the show, Fiona the miniature pony, who came inside the house, all brought immense comfort and happiness not only to Mr. Curry, but to his loved ones, as well. Cheryl Curry, his daughter- in-law, was the mastermind who arranged to have the animals come. Before the animals visited, he couldn’t get out of bed, he had stopped talking, and it was obvious he was sad and depressed. He could no longer go outside and see his animals. His family said he seemed ready to go.

“You should’ve seen how his face lit up,” Tom said with joy, adding, “We have not seen him that happy in a long time! He had a smile from ear to ear! To know that he died surrounded by the people and animals who loved him, we know it meant so much to him. He is now up in heaven playing with all the animals he can.”


Up Close:
The Greatest Honor: After enlisting in the U.S. Air Force in 1959, Mr. Curry was eventually assigned to the 50th Tactical Fighter Squadron at Hahn AFB, Germany, where he met and married his beloved wife, Liane, of 59 years. He had two sons: Tom and Gary; and five grandsons: Tommy Jr; Matthew; Christopher; Sean; and Ryan Curry.

In the Word:
“My middle son Matthew is an angel. Has a heart of gold. Today when my dad was dying, my son Matthew said, “Last week when I was praying for Pop-Pop a voice told me “Your grandfather will be ok.”
We were like “What voice?” He said “I guess Jesus? It’s the second time the voice spoke to me.”
I said “when was the first?”
He said “I went on a church trip and was praying, and a voice said to me, “You are saved Matthew.”
Matthew is an amazing kid with a giant heart. I completely believe this happened to him. This put me at peace. Anyone who knows Matthew knows this is true.”