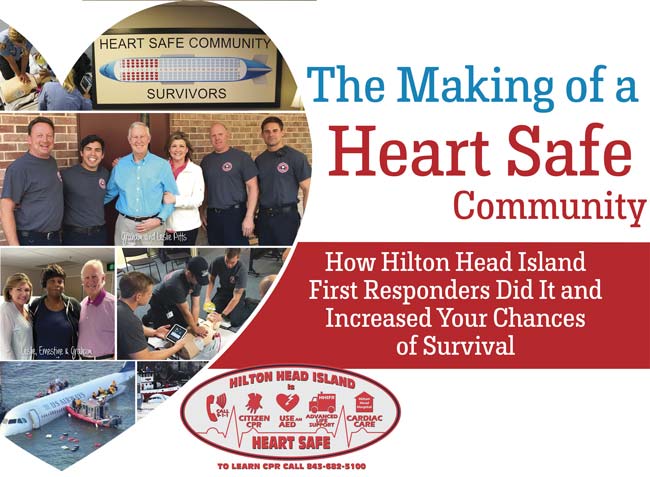 Most of us have probably never thought through our odds of survival if we were to drop from sudden cardiac arrest. Even professional responders have delved surprisingly little into the various factors around this typically fatal event. But Hilton Head Island Fire Rescue is different. They have thought it through, extensively, and they’ve trained accordingly. The result is that they are saving more people each year than will ever get caught in burning buildings.

Should you suffer cardiac arrest on Hilton Head,
your hope of survival is better than almost
anywhere else in the world.

The road to excellence began in 2009 when an investigative report by USA Today caught the attention of local responders. Entitled “Six Minutes to Live or Die,” it examined the state of emergency medical services around the country.

“What they found was tremendous variability from community to community,” said Tom Bouthillet, Battalion Chief of EMS for Hilton Head Fire Rescue. “Most didn’t even know how they were performing. That seemed kind of alarming.”

That same year, the emergency water landing of US Airways Flight 1549 captured public imagination when all 155 people aboard were saved by rescuers. Inspired by this “Miracle on the Hudson,” yet disturbed by the USA Today report, Bouthillet and his colleagues mobilized to action.

The first step involved collecting data to gauge their performance. A population-based estimate determined that each year Hilton Head would see approximately 50 instances of “workable” cardiac arrest, meaning the person actually has a chance of being resuscitated. Out of those 50, half would be “unwitnessed,” meaning nobody saw them go down, in which case there is basically zero percent chance of survival. Of the remaining 25, about 15 would be “shockable”—able to be brought back with defibrillation—and this is a very special category. The percentage of witnessed shockable patients who go on to be discharged alive and well from the hospital constitutes the most reliable barometer of how well first responders are doing. Sadly, a mere 5-10 percent survival rate is the norm.

“There’s about a 10 percent drop in survival rate for every minute that goes by,” said Bouthillet, explaining that sudden cardiac arrest occurs when an electrical glitch causes the heart to stop beating normally and merely quiver without pushing oxygen through the body. “If it takes responders 10 minutes to get there, you can do the math on why mortality rates are so abysmal.”

Here on Hilton Head, this meant that out of 15 witnessed shockable cardiac arrests each year, only 1.5 people would survive. Bouthillet said they could remember anecdotally a couple fluke cases of people they’d saved; but taking a good hard look at the numbers made them realize they wanted to do better. A lot better. They decided to raise the odds to 40 percent, or 6 people a year. Over a quarter-century that would amount to 150 lives, the number of passengers in a Boeing 737—Hilton Head’s own “Miracle on the Hudson.”

A special delegation was sent to the Seattle/King County Resuscitation Academy, which boasts the highest survival rate in the world. Here they learned to reliably track and measure data, and to execute “high performance CPR” by practicing on computerized mannequins that allow them to perfect advanced methods. They began training local dispatchers to recognize cardiac arrest—since people calling 9-1-1 often report stroke, fainting, everything but cardiac arrest—and they taught the dispatchers to coach callers through CPR. They got a grant to launch a new app called Pulse Point, which crowdsources CPR trained people in a local area—nurses, off-duty EMTs, even Boy Scouts. Whenever someone calls 9-1-1, the app will ping participating individuals within a half-mile radius, send an alert to their phone and walk them to the scene.

Perhaps the most surprising metric responders learned was that the degree to which they are able to connect with people at a very human level has everything to do with long-term success rates.
“Dispatchers and bystanders performing CPR own the first 600 seconds of this event,” said Bouthillet. “But we found that by the time the dust settled, they were gone and the opportunity to thank and debrief them had passed. Now we make sure and catch them rather than leaving them adrift with this experience.”

In the ongoing program to follow up with bystanders, Bouthillet says they’ve had people burst into tears and say, “You mean they’re alive?” He considers it a vital part of his job to answer questions and help them make sense of their experience; for example, they may have broken the victim’s rib/ribs during CPR and needed to be relieved of that guilt. One very rewarding aspect is arranging face-to-face meetings with bystanders and survivors. Often these stories involve odd synchronicities, such as the case of a man who collapsed during a race and was saved by a nearby nurse practitioner named Rosemary. When the two connected later, she told him her father had also collapsed during a race many years earlier and been helped by a bystander whom she never had the opportunity to thank. The man then told her that his mother’s name was Rosemary!

“There have been so many interesting little connections, we’re almost surprised when there isn’t one,” says Bouthillet. “That tells me they’ve probably always been there, we just didn’t connect the dots before. So a big part of our program now is celebrating these stories. The bottom line is that when you connect with your community, it works.”

Since the program began, HHI Fire Rescue has gone from dubious numbers of one or two people saved, to 48 documented cases of survivors whose lives would have been lost without intervention. Their best year to date was 2017: 16 cases of witnessed shockable cardiac arrest, out of which 11 survived, putting Hilton Head well on its way to that “Miracle on the Hudson.” Hanging in the lobby of Fire Rescue Headquarters is a special graphic they designed of a Boeing 737 fuselage with 150 seats—each survivor gets their own seat assignment with a heart on it. In recognition of their efforts, HHI Fire Rescue has been given an outstanding Heart Safe Community award by the International Association of Fire Chiefs.

A wonderful testament to their success is the story of Graham and Leslie Pitts, who were vacationing on Hilton Head in May 2016 when Graham went into sudden cardiac arrest in his sleep. Leslie was awoken by a horrible gasping noise to find her husband purple and unresponsive. She called 9-1-1, and the dispatcher, Ernestine Reed, calmly and competently talked her through CPR, advising her to pull Graham onto the floor using the bedsheets so that her compressions would be more effective rather than getting absorbed into the mattress. When Leslie felt she couldn’t continue with the physically exhausting compressions, Ernestine cheered her on and told her she couldn’t stop. Ten minutes after the initial phone call, the arrival of responders was described by Leslie as “like a stream of military special forces coming into my bedroom”; they were uniformed, shaven, coordinated, rehearsed, professional and calm. But most importantly, they allowed her to remain nearby while they performed their life-saving work.

“They did not shoo me out of the room,” says Leslie, who at one point grabbed the only part of her husband she could see—his ankles—and started praying. “They weren’t trying to micromanage or protect me from any imagery. And I think regardless of what the outcome had been, it was important that I was allowed to be present. I was allowed to be a wife.”

In the aftermath, Bouthillet gave Leslie his business card and told her to reach out any time. She wanted names of the responders so he hand-wrote them on an EKG strip that literally showed her husband dying and coming back to life. Later Bouthillet took the time to personally explain in detail to both her and Graham what had happened to him, and to connect them with Ernestine so they could hug, laugh and cry together. Leslie says these follow-ups considerably reduced her trauma by helping her integrate the experience into her own story. She now considers it essential that everyone learn to do high performance CPR, because sudden cardiac arrest can happen anytime, anywhere, to anyone of any age or health condition. Mouth-to-mouth resuscitation is no longer the preferred protocol, she says, alleviating bystander concern of disease transferal. Rather it is the rapid compression technique she used, pushing two inches straight down on the chest at the rate of 100 times per minute, to the rhythm of “Happy Birthday to you,” that offers the best hope of keeping the victim alive until professionals reach the scene.

“What we know now from reading survivor statistics is that we were in the best possible place,” said Leslie, adding that her husband was “dead” for 20 minutes, yet returned with full mental faculties and organ function thanks to competent care. “We had one of the most highly trained teams on the East Coast respond to us. God was at work helping me, but through them. They gave me my husband back.”