Founded six months before women officially won the right to vote, in February 1920, by Suffragettes Carrie Chapman Catt and Jane Brooks, the League of Women Voters immediately jumped into action, and within a few short years, chapters all over the country were formed.  One of their initial programs addressed the issue of US-born women’s citizenship rights if they married a non-U.S. citizen.  At that time, the Expatriation Act forced married women to automatically become citizens of their husband’s country, and lose their U.S. status, even if they were Americans.  Shortly after the voting rights bill was enacted, this was overturned, so all American women would remain US citizens and be eligible to vote.

The organization has grown exponentially over the last century, despite a couple of decades when there were setbacks due to World War II, and later, a socio-cultural rift that sought to tear down much of what the League had already accomplished.  Nonetheless, this organization continued to prosper and grow to its current 700 chapters around the country and 500,000 active members in all 50 states. Counting among its member’s notables are Congresswoman Shirley Chisholm, First Ladies Eleanor Roosevelt, Betty Ford and Lady Bird Johnson, and former Secretary of State Hillary Clinton. The LWV continues to encourage women to run for office to achieve a more accurate representation of the nation’s gender demographic.

To celebrate the achievements and upcoming plans for what the local Hilton Head-Bluffton LWV Chapter considers most urgent facing voters in the Lowcountry is a list of important 2020 programs to make a difference:

Education is one of the biggest pushes for LWV and they place their education efforts into two distinct groups: students and voters. As far as students are concerned, the group applies much of their efforts into monitoring Board of Education and town council meetings, while studying and reporting to the Statehouse for ways to more effectively fund the Beaufort County public school system.  They advocate for competitive teachers’ salaries and against inappropriate use of public funding for religious or private school education.

“Our most recent advocacy effort was working with other community groups to help pass the much needed school bond referendum in November.  This was the first successful referendum vote in 11 years, and we were proud to help make it happen,” said Kathy Quirk, LWV Chair, Education Committee.

In regards to voters, LWV spearheads and participates in numerous voter education initiatives and events on everything from knowing your rights, to improving access to the polls, to lobbying for updated, more secure voting machines and the importance of accurate representation. 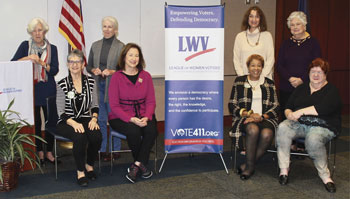 Gerrymandered districts ensure that whichever party has the power and money, will remain in power.  So coined in 1812 after Massachusetts Governor Elbridge Gerry when he redrew one of Boston’s districts into an area that looked like a mythological salamander in order to maximize his own voter turnout, while minimizing the oppositions’.  This practice has expanded to affect many states and elections.  Ironically, redistricting is the method used to create the problem, and it is the necessary method to also resolve it.

Since redistricting occurs about every 10 years in most states (after the Federal Census is completed), the LWV is taking advantage of its grassroots expertise by embarking on a “People Powered Fair Maps Plan.”  According to a report submitted by Mary Ann Bromley, LWV’s State Issues & Advocacy Chair, the initial committee members will implement a postcard campaign to state representatives asking them to support H.3054 to create a S.C. Independent Redistricting Commission to help eliminate Gerrymandering. The bill can be found in its entirety at
www.scstatehouse.gov/sess123_2019-2020/bills/3054.htm.

On February 12 there will be a “Lobbying Day” in Columbia (see sidebar for details) with the LWV present and accounted for, as well as a committee to focus on digital messaging locally and possibly starting a petition.

For LWV HHI-Bluffton President Patricia Felton-Montgomery the ERA pulls at her heart this year.  Suffragette Alice Paul first introduced the Equal Rights Amendment in 1923.  Even though it passed through the House and Senate in 1972, it still has to be signed by 38 states to become Constitutional Law, and so far, there are only 37 states that have signed with Illinois being the 37th on May 30, 2018.  So, 97 years later, women all over the country are still waiting to be granted official equal rights.

South Carolina could make history by being the one state that could pull this through.  Currently, it has the support of two state legislators, as well as our US House Representative Joe Cunningham, who emailed this statement regarding SC’s decision to ratify the ERA:

“Our state legislature has a chance to do right by the women of South Carolina and America by becoming the 38th state to ratify the Equal Rights Amendment, fulfilling nearly 100 years of tireless work by organizations like LWV.  I’m proud to support the work of Rep. Gilda Cobb-Hunter and Senator Tom Davis to introduce an ERA ratification resolution.”

Truly, it would be nice to be a resident in the state that makes it all happen… finally.

You can join the LWV by filling out the form at: https://mylwv.org/south-carolina/hilton-head-island-bluffton-area/join