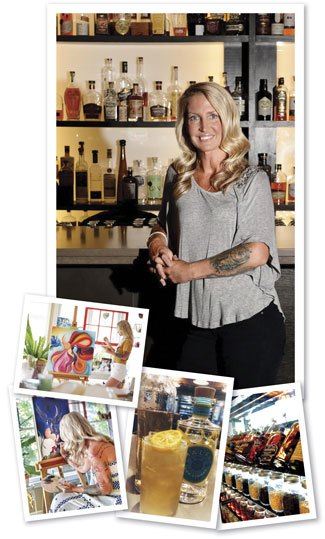 Like the cocktails she creates with such finesse, Monica Smith Collins, General Manager at the Whiskey Room Kitchen and Cocktails, is an island original.

Monica first arrived in Hilton Head with her parents-to-be in the mid-seventies, making her own appearance shortly thereafter in the Beaufort hospital maternity ward, since Hilton Head didn’t yet have one of its own. Beyond that brief detour, Monica’s early childhood years were spent exclusively on the Island.

It stuck. While her family eventually returned to North Carolina, Monica took the first chance she got to return, accepting a position with Outback Steakhouse after graduation and eventually opening a restaurant for them on Hilton Head’s north end.

In time, Monica ventured to Charleston and Columbia, married and moved to Anchorage, Alaska where her son was born, and later to Little Rock, Arkansas. As often happens with life, the path wasn’t always straightforward, but it was filled with plenty of life lessons. In the end, it led her back to Hilton Head Island.

“Hilton Head has always been my home,” Monica said. “I’m very at peace here.  I love our community. I love raising my son here. I feel like (no matter where I was), I would have somehow found my way back here.”

In the ten years since her return, Monica has worked for restaurants across the island, honing her knowledge of the hospitality industry. She also pursued another passion during this time—working with abused and neglected animals at Noah’s Arks Rescue in Okatie, “It changed my life,” Monica said. “You really feel like you’re making a difference.”

In 2016, Monica suffered a series of setbacks, first sustaining significant damage to her home from Hurricane Matthew and then, shortly after, a serious illness from which it took months to recover. Yet, while home and health had taken a hit, Monica’s resilience didn’t. She got back on her feet and joined forces with Charbar owner Nick Bergelt in creating the Whiskey Room, a unique bar concept specializing in whiskey and bourbon. Monica was excited for the challenge. Opening in 2019, the bar and restaurant continues under Monica’s capable management and that of head chef and owner Tim Nelson.

She couldn’t be happier with the way it’s turned out. “I love coming to work every day,” Monica said. “I love the fact that we’re different.’

Monica strives to keep diners happy while finding ways to expand their customer base—including women, who might be put off by the establishment’s name. In addition to its impressive selection of whiskeys, Monica has added wine, beer, and champagnes, as well as an ‘Introduction to Whiskey’ sampler. She regularly keeps up with the latest trends by speaking with industry reps and reading Whiskey Advocate.

Still, cocktails are her passion. “I’ve always been intrigued with blending things and spirits,” Monica admitted. All of Whiskey Room’s cocktails are her own recipes. “We make everything here,” she said, including their own syrups and purees—even growing the lavender they use for one of Monica’s favorite cocktails, the Greta Garbo, a house made lavender cordial. “It’s like sunshine in your mouth,” she declared with a smile.

And what are her other passions?  Without a doubt, Monica’s son, Chase, who is now 15. “Being a mom is the best,” she said. Together, they share a home with their four dogs, all pit bulls rescued over the years.  She also cherishes time with friends, lazy evenings on the beach, and her family, who are scattered throughout the South.

Monica is also passionate about painting, a talent she has pursued with renewed enthusiasm during the Covid-19 restrictions. “I’ve painted all my life.” Her vibrant oil paintings depict images of nature in the broad-stroke style of Georgia O’Keefe. She also enjoys drawing and has designed several of her  colorful body tattoos.

While Pink’s official theme for July is ‘#Miss Independent,’ to Pink insiders it is the ‘Badass’ issue. Asked why she might fall into this category, Monica replied. “I think being a single mom you have to be a ‘badass.’ I am very independent. I don’t waiver very easily. I’m passionate about our world and life and being compassionate. And I try to teach my son to be the same way.”

Favorite places: Alaska (“just amazing”), the mountains in Asheville, and the Outer Banks, where she hopes to eventually end up one day.

Her family: Monica’s sister lives in Nashville, her brother in Atlanta, and her parents are in Hickory, NC and the Outer Banks.  Her grandmother, a 93-year-old folk singer, who still plays the hammer dulcimer, lives in Asheville.
What she’d like to do in the coming year: Monica looks forward to continuing the Whiskey Room’s journey, painting, and—most importantly—raising her son to be a good young man.