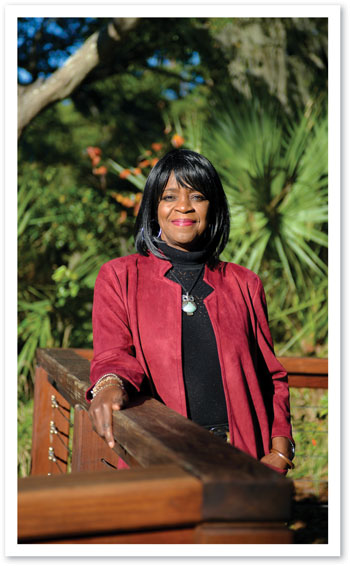 Once upon a time, a young woman in New Jersey married her high school sweetheart and believed that her life would be fulfilled by her Prince Charming. They would raise children, grow old together and happiness would forever be theirs.

Unfortunately, her dreams ended in divorce, and Lucille Tyler Baldwin quickly discovered how ill-equipped she was to manage her finances. “I had wonderful parents growing up, but we never talked about money, bills and debt,” she said. “I blamed my situation on Disney movies,” she joked, “because that’s all I did as a child…watch Disney movies…my Prince Charming would give me everything I would ever need.” Lucille worries too many women also believe in this fantasy. Now her passion is to teach financial literacy to women and children. “You can be in love and still handle money,” she said.

When Lucille found herself divorced, with small children, she realized she didn’t even understand the difference between principal and interest. As her credit card debt grew, she was living paycheck to paycheck and sometimes only had five dollars left after bills were paid. A Golden Corral restaurant opened nearby, and she told her 8-year-old daughter she would save up some money so they could go there. Her daughter responded, “We must be the only people in the world who have to save money to go to Golden Corral.”

Lucille worked at K-Mart in Beaufort for 20 years, and one day as she stood on a ladder stocking shelves and looked down at her co-workers. She thought, “We work so hard every day, but we just can’t get ahead. There’s got to be a better way.” Then at a mall, she felt compelled to enter a Barnes and Noble Bookstore for the first time. “I started to read about what I didn’t know,” Lucille said. “I have got to share this information!” she told herself. “God led me to this inspiration—to share this knowledge about how to pay yourself, to get out of debt and to acquire assets.”

“Once I learned, it took years to get out of debt, and then more years to learn how to write a book. I had 100 chapters in my head, and it was like an invisible person kept asking me questions about finance. “We’re surrounded by information, so we can learn to do everything. I was cooped up in the house for years writing. My grandfather once told me to get everything done, otherwise your dreams will go to the grave with you.”

Lucille said, “Women are beautiful and smart. Our power is to learn. The first lesson is that YOU are the BOSS of your money. You have the power. Money says, ‘I have no power of my own. I go where you tell me to go, so if you’re broke, it’s on you.’”

Second: “Believe you have the power, that it’s possible to learn. Then get started, even if it’s only a penny. Get four more pennies and you have a nickel. Get five nickels and it’s a quarter. Start a habit of thinking about money in a positive way. Track every penny you spend for a month, and at the end of the month see how much money you can find. Look at your choices about buying lunches and coffee every day. I found $300 overspending in grocery stores. I would go in the store for milk and end up spending more. I call it my $50 gallon of milk. Grocery store marketing is set up to get us, so instead of reacting, be pro-active.”

Lucille learned we develop our money habits between 7 and 9 years of age. Children understand that money gives them power to buy candy, for example. Adults have a responsibility to teach their kids, so Lucille has also written several children’s books that serve up bite-size chunks of financial information. “To hear second graders talk about finance is beautiful. Financial empowerment should be taught in schools,” she stated. Lucille’s children’s books are available in Beaufort County Libraries.

Up Close:
Generational poverty: “If you educate a woman, she will educate her children. They will also pick a partner who knows how to handle money,” She has seen such generational poverty that she wanted to cry. “To see women suffering in silence is really heartbreaking.”

Four financially savvy grandchildren: Lucille has three boys and one girl between the ages of 3 and 12.

Saturday Fun Day/Bank Day: Lucille and her grandchildren find free things to do, like going to a park, playing video games, or even going to Publix for free cookies. Then they go to the credit union where they can dump their saved coins into the machine, get a ticket and deposit the money into their accounts.

Inspired by: This Toni Morrison quote inspired Lucille to write her books: “If there’s a book you want to read, but it hasn’t been written, then you must write it.”