Hi-Tech and Focused on Sharing it with the Next Generation! 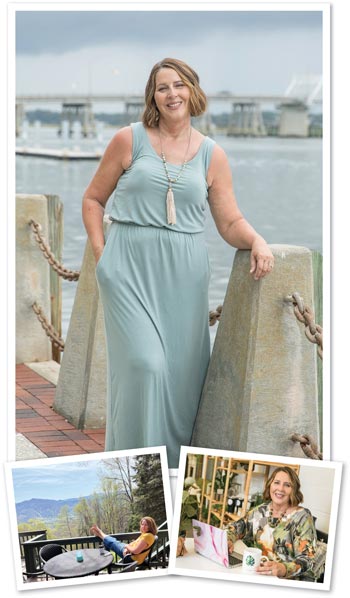 Like most “pioneer” stories there were cows and pigs involved in the beginning. In fact, Beaufort’s Jeannine McConnell describes herself as a “farm girl” who grew up in rural Troy, Missouri, (Northwest of St. Louis) where the cows and pigs outnumbered the town’s 3000 inhabitants. The scrappy, pigtailed girl toted firewood from the age of 3 and quickly learned that to survive and thrive in her family and town, she needed to become “one of the guys.”

“I was jokingly referred to as my mother’s first daughter and third son,” she laughed. This trait uniquely positioned her for her future career.

Today, Jeannine is recognized globally as a technology pioneer whose four-decade career spans successes from software development patents and Big 4 management consulting, to strategic global leadership roles. She has a passion for optimizing potential, creating order out of chaos, finding collaboration amongst the broken pieces of complex organizations, and creating high performance teams that enjoy celebrating wins, while growing together. Many times, as the only woman in the room, with a ratio of about 1:35, Jeannine became determined to attain confidence and executive presence while becoming a “fierce” woman in technology.

Her focus on continuous growth also resulted in numerous certifications and her role as a certified OKR (Objective and Key Results) Coach, as well as a certified ECHO (Effective Communication for Healthy Organizations) Listening coach. Jeannine encourages others to constantly be building their skill set and working towards what comes “next.” At present, her career is transitioning to the “next” phase because of her efforts to share what she has learned from a lifetime of pioneering as a woman in the male-dominated tech industry. Jeannine is passionate about supporting future female generations, so this ever-challenging, broad and lucrative career option is not only attainable but authentic.

An Unlikely Beginning
When Jeannine was 18, and a senior in high school, she began dating an exciting “older man.” Dan McConnell was 21, already in college and working in technology. As guidance counselors advised Jeannine to explore engineering, which she wasn’t interested in, or more traditional roles like teaching or nursing, her mother suggested she consider being a stay-at-home mom. “I didn’t have a voice in my head or a mentor to advise me with regard to possibilities,” Jeannine explained. One day Dan, (who eventually became her husband) suggested she should “look into computers” because he thought they were going to be “big.” Jeannine didn’t know anyone in the field of data processing, but reasoned there probably weren’t any girls in the emerging profession. It appealed to her to be one of the first. “I thought I would do something no other girl had done,” Jeannine reminisced.

“Again, after getting my bachelor’s, there was no voice in my head or mentor advising me of what the possibilities were,” she said. Jeannine moved on from developing software for a small midwestern company to a series of Silicon Valley and Big 4 consulting company jobs, which involved a lot of travel that organically expanded her horizons. “I realized the tech world was so much bigger and broader, and I didn’t have to live in Troy, Missouri!” she laughed.

Jeannine and Dan moved their family and put down roots in Charlotte, NC, where she specialized in technology utilization to drive process and work performance optimization. In 2021, she successfully closed out her 43-year corporate tech career, having spent the last seven years as a global leader at ServiceNow, the world-wide giant considered to be the fastest growing enterprise software company ever in existence.

Lessons & Wisdom Along the Way
As her life and work experience grew, Jeannine became passionate about STEAM (Science, Technology, Engineering, Art and Math) as opposed to STEM (Science, Technology Engineering and Math). “I left high school as the recipient of both the Art and Physics Awards. I understand how important both left and right brain thinking is, particularly as it relates to technology careers,” she explained. As a result, Jeannine has spoken at high schools across North Carolina and to professional organizations about the critical importance of diversity of thought and approach and why art is a crucial component to good end-results.

Today, Jeannine continues to be a passionate advocate to ensure girls are aware of the broad diversity of technology careers. “While coding is important, we tend to turn teen girls away by conveying tech is ONLY writing code, as opposed to a broad slate of lucrative, in-demand, exciting careers,” she explained. To that end, Jeannine partnered with other leaders from global tech companies to launch a high school program focused on exposing girls to mentors and role models across the tech career spectrum. The program focuses on building their innate superpowers, like resilience, empathy, collaboration and more. The premise is that many times younger women see themselves as artsy/creative, educators, or businesswomen and discard tech careers because they don’t see any fit.

“I want to be the voice in their heads that I didn’t have, equipping them for success and leading them to become experienced, successful women who can help navigate the challenges (and joys) of the journey.”

Jeannine is even more dedicated to coming alongside women who are approaching, or experiencing, the middle of their tech careers. According to research, 60-percent of all women in tech drop out of the field mid-career. “It’s useless to educate and recruit girls into tech if mid-career we lose them,” Jeannine explained. As women age in the industry, the hierarchy (and clash between genders) becomes increasingly challenging and competitive. “I want these women to have the tools to equip themselves to have fulfilling, sustainable, exciting and lucrative careers, while being able to be the best of their authentic selves in their work environment,” Jeannine enthused. “I’ve made a lot of mistakes and learned a lot over the years. I enjoy sharing the techniques I employed to assimilate in a male-dominated industry in a way that I was being myself, but doing it in a manner that worked in the system in order to be viewed as a leader and not an administrator, maid or mom.”

Proud Cancer Survivor: Jeannine is approaching the 30-year anniversary of her original breast cancer diagnosis. She triumphed over the disease again seven years ago. Between the two occurrences, she spent three years in chemotherapy. Ever the student and innovator, on her second round of chemo, she successfully used Penguin Cold Caps to retain most of her hair, which gave her the opportunity to reduce the visible impact of treatments. She now works to support other cancer warriors to help manage the anxiety, fear and realities of living as a cancer survivor, as well as supporting women who wish to “cap” to save their hair.

Mountain AND Beach Girl: Jeannine and Dan live in Beaufort’s Celadon and love to boat on the Beaufort River. They also enjoy spending time at their mountain home in Waynesville, NC. A perfect day is watching the sunrise over the mountains with a cup of coffee and hiking with their pup Maggie. Throw in their three grandchildren, and you have an even sweeter day!

Reach Out: Jeannine is a speaker, facilitator, and trained coach. She can be reached at 636.295.6703 or This email address is being protected from spambots. You need JavaScript enabled to view it.