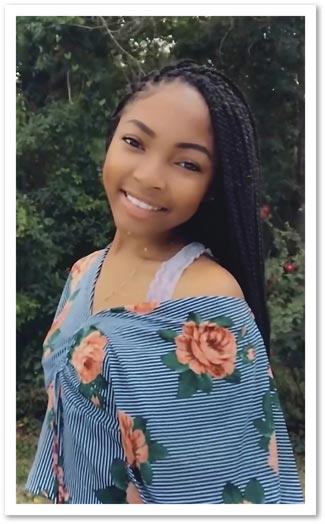 The uncomfortableness that would surround me when someone would ask “Why does your dad only have one arm?” or “How many siblings do you have?” was sometimes unbearable. I usually found myself thinking about exotic lies to tell people about these situations because the truth was too complicated for me to comprehend and explain at that age. I remember telling one of my classmates that my dad got his arm bitten off by an alligator because I thought it was easier to say that than to say, “He got in a car wreck and had to get his arm amputated.” It was so confusing when others would ask me how many siblings I had. I didn’t know whether to say I had 3 or 2. Did she still count as my sibling even though she passed away? My young innocent mind couldn’t handle it.
Excerpt from "Every 16 Minutes"—An Essay by Jaala Grant

When most college freshman are flying from party to party without a thought of the consequences, Jaala Grant doesn’t play that. She’s too familiar with what can happen when life goes horribly wrong.
“So many teenagers drive crazy, and they just think it’s a joke,” says this quiet, mature Hilton Head native and first-year nursing major. “Until something happens—then it’s too late.”

In 1988, more than a decade before Jaala was born, her father was leaving a birthday party with three friends when the car went wildly out of control. No one knows exactly what happened, but the car’s speed was believed to be 120 mph when they went airborne, hit a tree, flipped endless times and landed 265 feet away. Two of the friends died, one broke his spine, and Jaala’s father lost an arm, as well as all memory of the event. He eventually learned to compensate, going back to work as a server at the family restaurant, Abe’s Diner, and cracking jokes about his one arm to make Jaala laugh. But when kids started picking on her at school, things got awkward.

“I didn’t feel normal just because my family wasn’t picture perfect,” says Jaala, whose brother has cerebral palsy and is in a wheelchair. “It was normal to me, but society would make me feel embarrassed. Now as I get older, I’ve turned things into positivity and learned to feel thankful no matter what.”

That wasn’t the only ordeal their family had to face. When Jaala was just a toddler, her 22-year-old sister, Shakeria, was coming home from a wedding with three friends when a drunk driver crossed the centerline at 90 mph and collided head-on. Both cars exploded. All four people in Shakeria’s car died, as well as two passengers in the other car—only the drunk driver survived and was sentenced to 20 years in prison. Jaala remembers how traumatizing it was to see her mother go through the loss of a child, yet still have to pull it together and raise her. Eventually the wounds healed, and today her mother says the experience built her spiritual strength.

“I always talk about what we can do to be safe,” says Jaala, who wrote a compelling DMV scholarship essay entitled “Every 16 Seconds,” in reference to the frequency of deaths behind the wheel. “If I’m in the car with someone, and they’re driving crazy or talking about how they got drunk at a party but drove home anyway, I bring up how my sister got killed. It shocks them, and at least with me, they have more sense.”

Maybe it was because of the tragedies that marked her family, or just the awful cruelty kids can display for no reason at all, but Jaala was severely bullied in school. “It was so confusing because either I didn’t know them, or I didn’t do anything to them,” she said. “The goal of their day was to make Jaala feel as bad as possible.”

The face of cyber-bullying is particularly disturbing: they were finding random pictures online of naked women who looked like Jaala, cropping out the head and pasting in her face, then posting them on fake accounts under her name. Jaala and her family appealed to teachers, administrators, even law enforcement, but nobody did anything. It wasn’t until kids starting committing suicide because of abuse like this, Jaala said, that people finally started to connect mental health with bullying. “It takes somebody losing their life for you to care?” she rightfully questions. Yet like her mom, she healed with time and learned to find strength and purpose through the trials.

“I would love to make an impact about bullying,” says Jaala, whose life is a message of inclusivity and grace. “I’m not sure how yet, but I know I want to make a difference by helping kids and teens with things I went through. My hope for the future is that people can become kinder.”

UP CLOSE:
Career goals: Go into OB/GYN, which she was inspired to do after her older sister gave birth prematurely
Hobbies: crafting, painting, refurbishing
Loves: pasta, dogs and watching crazy medical documentaries
When she comes home to HHI, it’s all about: hot baths, time with family and her dad’s cooking (red rice, pork chops, fried shrimp etc.)
"Every 16 Minutes": Read Jaala's entire essay by clicking here.