Lucky to Have Each Other 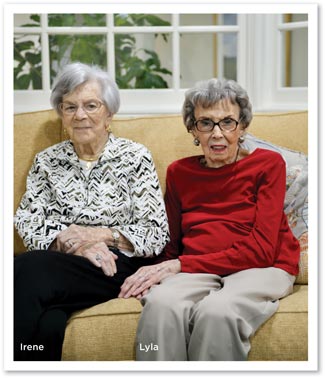 ‘It’s never too late to make a new friend. Just ask Irene Racine and Lyla Stocker. They’ve been best friends for more than a decade, which may not seem like a big deal, except Irene just turned 100 in September and Lyla is 101.

Though these two precious ladies are from different backgrounds, their friendship suits them perfectly. Originally from Buffalo, NY, Lyla is retired military. She was a Naval registered nurse during World War II, on duty aboard a ship that was bringing Americans back from Germany. Her military career expanded to the launch of the United States Air Force, and she transferred from the Navy to serve. Her career took her to Seattle and Yokohama, and she was active duty during the Korean War. She served her country, and it wasn’t until her military days were over that she settled down, found the love of her life and got married.

Meanwhile, stateside, Irene, a Chicago native, was a busy housewife, raising three boys and running her home. The two ladies had no idea their paths would cross, but this unlikely pair ended up meeting, becoming friends late in life and now count on each other daily.

Like many a Hilton Head story, the Racines and Stockers landed on Hilton Head thanks to their retired, golf-loving husbands. It was on the golf course that the husbands connected. Both ladies played too, but never played together. “Our husbands were golfers, and we all lived in Hilton Head Plantation,” Irene said. She said that Lyla had come to her house for a party, but the two did not become good friends until years later when they moved to The Cypress retirement community just inside the back gate of Hilton Head Plantation.

Now both widowed, Lyla a lot longer than Irene, their friendship has become one of the most important things to them. Irene’s sons and their families live far away, though they all came to visit for her 100th birthday celebration! And by the time Lyla got married, she had no children of her own, although she considers her step children like her own, but they don’t live near by either. Regardless of the distance, both ladies are very close and connected with their families.

Sitting down with the two of them was a hoot! Irene’s sense of humor is dry, hilarious and spot on. Lyla is a walking, talking encyclopedia. Both of them are amazing! While we were talking, they both discovered things about each other they never knew. Of course they talk on the phone daily, but mainly about the goings on around The Cypress. “We talk about generalities…people dying, personnel changes, the food, things like that,” Lyla explained.

It was when Irene started telling about her travels that they learned Spain was both of their favorites! “I didn’t know that about you. I’ve learned more today than I’ve ever known,” Irene said. Lyla had told us stories of her military days and the places she had been all over the world, which includes Russia, Africa, Morocco, Greece, Germany, so many more and of course, Spain. Irene said, “Lyla, how do you remember it all? I don’t, so I’m glad you’re here!” We all laughed!

With the talk of world travel, and last month’s Pink Magazine cover of Queen Elizabeth, we had a wonderful conversation about the queen. These ladies remember when Queen Elizabeth was coronated. “It was all over the newspapers. She was the youngest to ever become Queen. The news could not get enough of it. It was everywhere,” Lyla said.

When I asked Irene what made Lyla such a good friend, she responded, “She’s a good ol’ steady rock. We are lucky that we have each other.” Lyla chimed in, “We go to church together, go to lunch together and dinner. Irene is a very good friend, very dear.”

“She’s as healthy as a horse,” Irene said, adding, “She rarely goes to the doctor. My boys keep asking me ‘how are you, Mom.’ I just say fine.” Irene has macular degeneration, which keeps her from reading now, and Lyla has trouble hearing. We laughed that together they make up one person with all her senses! “Being 100 is not hard, it’s just limited,” Irene said. Lyla agreed stating, “The most frustrating thing is not driving. There’s nothing worse than giving up your automobile. That’s why men never stop driving.”

As a final question, I asked them what they were looking forward to. Lyla said, “It’s so nice to see the grandkids grow up and develop, but I am ready to go.”

Irene looked at Lyla and told her, “I say a prayer every night wishing He would take me.”

Up Close:
The Cypress has a Centurion Club that Lyla and Irene are a part of. In all, there are seven residents at The Cypress who are 100 years old or older; the oldest being a gentleman who is 105. We’re told he doesn’t look a day over 80, and he is fascinating to talk with.